What do Germans eat at Christmas? And did the Christmas tree really originate in Germany? Catch up on the Christmas livestream with Rachel Stewart! 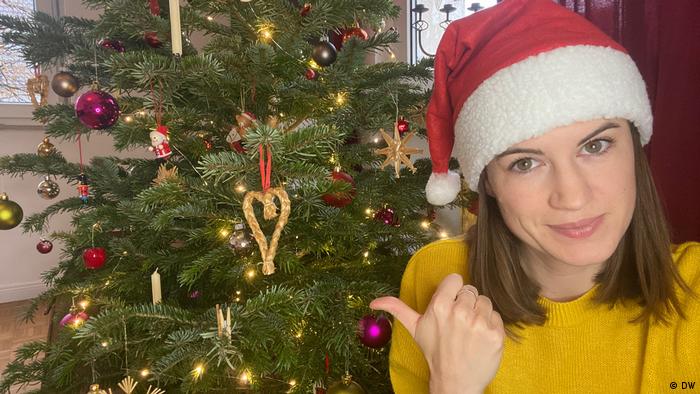 DW's Rachel Sewart has the lowdown on Christmas in Germany

Thank you to everyone who joined Rachel for the festive Meet the Germans livestream on YouTube. Below are a few of the highlights — and you can catch the whole video here.

How do you say "Merry Christmas" in German?

What are the differences between the celebration of Christmas in Germany and Britain?

Probably the key difference is what we call "Christmas." For Germans, Christmas itself is really December 24. That's usually when you open the presents and it's very important here. Whereas, for me, Christmas is the 25th.

There are a few things I miss about Christmas in Britain – just silly little things. I like the stocking tradition in the UK, where kids will get a massive sock that's full of little presents. Some people say that's a little bit like "Nikolaus" here. That's on the December 6, when kids put their shoes outside and they get little presents – nuts, chocolates, that kind of thing. I would argue that the UK one is slightly better because the stockings are much bigger!

What is a traditional Christmas meal in Germany?

On the December 25, here, it's quite normal to have something like duck or goose with gravy, cabbage and vegetables, and of course something like potatoes or "Knödel" (dumplings). The Christmas Eve meal is usually a bit simpler. some people have sausage and potato salad, others have fish (specifically carp). It's quite a simple meal, a bit lighter, so that you're ready for the next day to completely gorge yourself on lots of food!

Yes, they call it "wichteln." You take someone's name out of a hat anonymously and you have to buy them a gift. They have to buy a gift for someone else, and nobody knows who bought what. So it's a similar concept to Secret Santa. I think generally here the idea is that you don't spend much at all on the gift – it's usually meant to be a bit funny. Sometimes people might set a limit for how much you can spend, maybe €5 or 10.

Okay, let's take a moment to be sad about the fact that there were no Christmas markets this year. Obviously it was a good idea not to have them – they are normally so packed! But I love so much of the food. A classic is "Reibekuchen" – that's grated onion and potato deep fried into a flat patty. It's very tasty and quite fatty – but hey, it's Christmas, we can eat what we like!

The Christmas tree is a German thing, right?

Yes, that's true. There are traditions stemming back centuries where evergreen trees would be used for things like warding off evil spirits in other cultures.

But it was the Germans in the 16th century who started bringing trees indoors and decorating them. There were some variations between how Catholics and Protestants did it. I think it was the Protestants who started putting real candles on the tree – which is my favorite thing about German Christmas trees!

"Frohe Weihnachten" to all the Meet the Germans viewers and a happy and healthy new year!

Or for more Meet the Germans videos head to YouTube or dw.com/MeettheGermans.

Here's how the traditional nutcracker, created in Germany 150 years ago, became an iconic wooden Christmas decoration that's popular around the world.

Words you need to understand Christmas in Germany

Christmas is celebrated in many countries, but little details — and the words used to describe them — can reveal interesting cultural differences. These terms provide insight into German particularities.

Dinner for One: What's behind this bizarre German New Year's Eve tradition?