Medvedev: We′ll Can Missiles if Obama Halts Missile Shield | Europe | News and current affairs from around the continent | DW | 13.11.2008 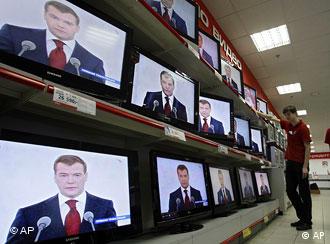 Medvedev told French daily Le Figaro on Thursday, Nov. 13, that he thought the incoming Obama administration may be more willing to negotiate over the missile system than the incumbent Bush administration had been.

"We are prepared to drop our decision to deploy missiles at Kaliningrad if the new American administration decides to abandon its anti-missile system," he said, noting that, based on early reactions, Obama was "thinking about it."

"We hope to create frank and honest relations with the new administration and resolve problems that we were not able to resolve with the current administration," he said.

The Russian president said Moscow was willing to consider "a global defense system with the United States, the EU nations and the Russian Federation."

Medvedev also said he had spoken with Obama by telephone and would like to meet him in person soon.

Obama not backing down 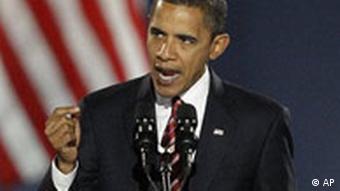 But Obama stated as recently as Saturday, Nov. 8, in a telephone conversation with Polish President Lech Kaczynski that he would not shy away from the anti-missile system, despite persistent pressure from Moscow to do so.

"Barack Obama has underlined the importance of the strategic partnership between Poland and the United States," Kaczynski said in a statement after the talk. "He expressed his hope of continuing the political and military cooperation between our two countries.

"He also said the anti-missile shield project would go ahead."

The US plans to build 10 interceptor missiles on Polish territory and a radar facility in the Czech Republic by 2011 to 2013. The new components would complete a system already in place in the US, Greenland and Britain.

Washington says the shield -- endorsed by NATO in February -- is aimed at defending against potential attacks by so-called "rogue states" such as Iran and North Korea and would not be aimed at Russia.

In response to the system, Medvedev has threatened to deploy short-range Iskander missiles in Kaliningrad. 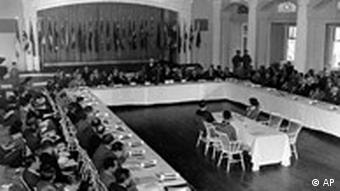 Medvedev's comments in the French daily, which is close to the administration of President Nicolas Sarkozy, were published ahead of a meeting in Washington on Saturday to deal with the financial crisis.

Medvedev said the participants must build the basis of "a new Bretton Woods."

Moscow had already suggested the development of a risk alert system that all countries would set up independently, he said.

"We share the same vision about the origin of the crisis," he said. "We must find the solutions to stabilize and reform the system for the long term."

The United States has presented Russia new plans for a missile defense system in the hopes of mollifying Moscow's objections to the program and salvaging nuclear control accords between the two nations. (07.11.2008)

Russian President Dmitry Medvedev nominally said he hoped for improved ties with the new US president, but also that Russia would fight US missile defense plans by deploying missiles near Poland. (06.11.2008)