A weekslong day care strike in Germany is set to come to an end - at least temporarily. The trade union representing day care workers has agreed with management to enter into mediation in an effort to settle a wage row. 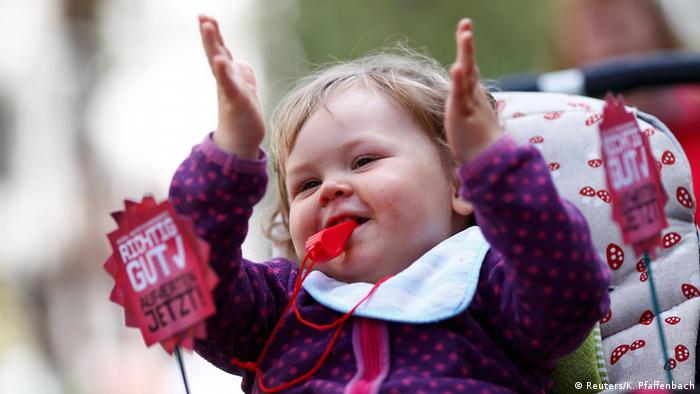 The Verdi services sector trade union and the VKA federation of local employers announced on Thursday that they had agreed to enter mediation talks aimed at resolving a dispute over how much day care staff are paid.

VKA President Thomas Böhle said in a statement that his organization had agreed to go to mediation in order to "spare the children and their parents any further strikes." He also noted that this was good news "for the parents in particular."

Verdi boss Frank Bsirske blamed the employers for the fact that the two sides had failed to reach an agreement, saying they had not been willing to accept a general upgrade in status and salaries that Verdi, along with the GEW union and the DBB civil servants' federation, were demanding.

"It didn't succeed because the employers' side stonewalled and stonewalled," Bsirske said.

Germany's 240,000 day care workers walked off the job some three weeks ago to back up their demands for an average pay rise of 10 percent. This is coupled with a demand that their job descriptions be upgraded to reflect a higher level of qualification required, due to the increased demands of the job, such as helping immigrant children to learn German and childhood counseling.

The VKA has rejected both demands, arguing that if adopted they would result in an increase in costs of up to 21 percent for municipalities that employ the day care workers - something the VKA insists is simply unaffordable.

The agreement to go to mediation means that the strikes will end as of Sunday, so day care or "Kita" workers in Germany will return to work on Monday and remain on the job for as long as the two sides choose to remain in the mediation framework.

Verdi has called a meeting for this Thursday in Frankfurt, where local strike delegates are to discuss strategy going into the mediation process. According to the DPA news agency, former Hanover Mayor Herbert Schmalstieg was to represent the unions in mediation, while it wasn't immediately clear who the VKA would name to represent its interests. It also wasn't clear when mediation would begin.

The six month long stand off between German public day care workers and their employers has come to an end as both sides agree to a compromise that would raise wages and provide better healthcare. (27.07.2009)

Bellingcat: Russia continued Novichok program despite claiming to end it 2h ago

Polish protesters rally against ruling that limits abortion 3h ago