People who migrated to another country often come across stereotyping. "Media Literacy through Media Making" is helping refugees to being more resistant to stereotypes spread through the media. 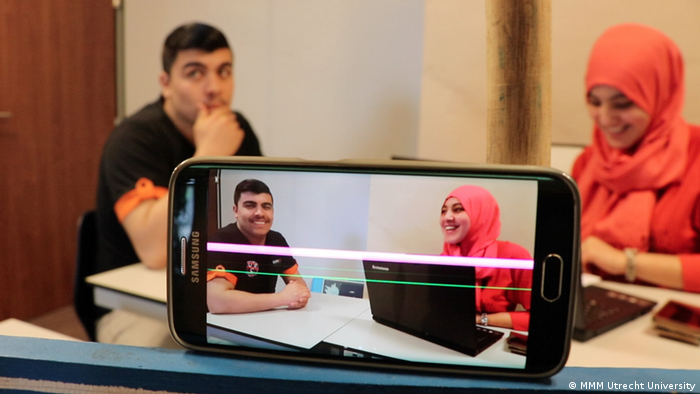 People who have fled their homes and people who have migrated voluntarily to another country often come across stereotyping in their new host country about the group or country they belong to. Refugees in particular, in this early phase of rebuilding their life from scratch, are sensitive to how they are perceived in their new host country. Most of the stereotyping they come across about refugees comes from what people have “learnt from media, believes Ena Omerovic. #mediadev spoke to the cofounder of "Media Lieracy through Media Making" (MMM) project at Utrecht University, Netherlands.

#mediadev Why do you focus on young people who fled their country?

With the risk of sounding clichéd, media do play an important role in how we view the world around us. I have fled my country myself as a young girl with my family, due to war in my country. I remember seeing in the media depictions of us refugees. Supposedly they were representative of what it means to be Bosnian. Usually the images were of impoverished people, which at the specific moment was true, although I know that many of the refugees looked just like any person walking the streets of Amsterdam.

Nevertheless the images were chosen deliberately, and I am not implying here with negative intentions, most likely to create the emotion of empathy amongst the viewers. At the same time it can produce a very reductive picture of who the person is as an individual. Such repetitive reductive portrayals of refugees in media lead to misunderstandings such as the recent one we had: “Why do Syrian refugees have mobile phones?” This implies that the people who are fleeing are not perceived as people who had normal lives before their lives were interrupted. 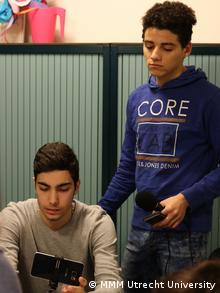 In the case of Bosnia, media in the nineties were showing a lot of pictures with people wearing religious symbols, such as a headscarfs. Which is completely fine but it is not the complete picture. In our country a lot of people were atheist due to a long communist tradition. The consequence for me was, that I grew up feeling that this was what others associate me with, and that that is how I should see myself, my “identity”.

Nowadays when we think of refugees, the images that pop up in our minds are images of people in boats. The images have almost no impact anymore on us because they are so repetitive. Rarely do we hear the individuals from the boats talk. People seem to be reduced to numbers. It is very rare that a different picture starts circulating and then the world is shaken up, like with the terrible fate that happened to the little boy Alan Kurdi that went viral.

This entire background and specific context for these particular young people, makes me want to be active in helping to raise their media literacy and awareness that the media make certain choices, a certain frame, a part of the entire story and never the entire truth. Ideally I want them to learn to make choices in telling their own stories, learning to use the power of symbolism and rhetorics with pictures and words themselves. When they do so, they will also be more resistant to news they come across that is supposedly about them. Maybe they will even feel empowered to respond back by using the same audiovisual techniques.

#mediadev: Do you consider these young people as future change agents? 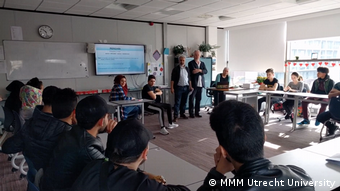 I do believe in young people as change agents bringing new discourses that start to be negotiated also at political levels. We can see a new generation emerging that seems to be more conscious and aware, for example, about the phenomenon of climate change. I see this more among the youth than in my generation. You can see vegetarians and vegans exploding amongst the young, the “Instagram generation”. It has become cool to be conscious, and it also brings you likes.

I think this is beautiful, how they take responsibility for the future of our planet. You can also see that the young are concerned about marginalized groups in our society. In the Netherlands we have for example a persistent problem with diversity in the media landscape. You only have to change a few channels on TV and it will not take you long to realize that what you see does not correspond to the daily life in the Netherlands, in a diverse multicultural society. I think a bit more than 20% percent of the population in the Netherlands is of migration background but not one in 5 presenters is. Not even close.

Identification with what you watch is a must for audiences. But the vicious circle of migrants not enrolling in media-related studies because of lack of identification, and media outlets’ tradition in hiring mainly Western and to them identifiable people, is not easily to be broken. I do believe that in making youth aware of reasons why it important that we have a diversified media landscape, they may start to be the changemakers for more diverse perspectives and voices.

#mediadev: What do they learn in your programm?

Our program is conceptualized around the consumption and production of audiovisual media. Although young people are using many audiovisual platforms, they are not always familiarized with the conventional techniques of filmmaking and television productions. They have passive knowledge because they have consumed stories their entire life based on conventional storytelling techniques that are used everywhere in the world. They need to make the step to know what these conventions are at an active level.

The techniques we teach them are normally taught in film and television schools, media studies and similar programs. I did not see a difference amongst students with different backgrounds or educational levels in how they would pick this up. These techniques are new to them, just as much as they would be to highschool students from any country.
To give an example of how they turn their previous media literacy awareness into active knowledge of its principles: A lot of students were aware that Bashar al-Assad makes use of propaganda. But once they engaged in producing their own propaganda - thinking of shots and verbal rhetorics - they gained more critical assessment skills on how the propaganda was actually framed. Therefore our program is not dependent on their educational level or previous media literacy standard. We take a different course, by making them the media producers.) 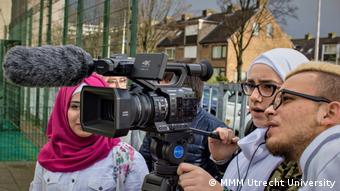 #mediadev: How do the young people get to know about MMM?

Young people that have migrated to the Netherlands enrol in transition schools when they arrive in the Netherlands, for a limited period of time. In these transition classes they are preparing for regular Dutch education. The Dutch language is of course prioritized in such schools. But also other regular courses such as math and other sciences.

The teachers that teach our program MMM at the Ithaka school are very enthusiastic about what our program triggers with their students. I want to quote a teacher that participated in this year’s pilot. He said that in the course he saw that students developed and showed facets of themselves they had not seen before. “The moments that the student dares to try something new; those are the most beautiful moments for a coach, for a teacher. Because this was an intensive trajectory and we were quite demanding; the reward is that you see a lot of these moments.”

It is the teachers in the transition school that enrol their students to participate. The program is the first media literacy program in the Netherlands for this target group.

#mediadev: Which media are the young people mostly interested in?

The media they are most interested in is what you probably expect to hear; social media. The media platform they most frequently use it on, is the mobile phone. Whereas I am used to consuming news watching TV, and probably you as well, they do everything on their mobile phones. Rarely or more likely never do they watch TV. They read the news on social media platforms,  such as Facebook. But Snapchat and Instagram are the number one applications used.

But more importantly, to come back to it, is this importance of the mobile phone. The mobile phone has an even more important role for these youngsters than perhaps for non-refugees. They use their phones to be updated about the situation in their home countries. They receive news and even pictures and videos from their hometowns. But it also has an importance for their new life in the Netherlands. They can be contacted by the Dutch IND who is deciding about their residency. Through in-class discussions about the use of media, the teachers and we, the MMM team, learned about this particular “lifeline role” the mobile phone has for them and the importance of access to it at all times in classes.

#mediadev: Do you also accompany the young people after they have finished the media education programme?

We do not have an official follow-up program after they leave the transition school to enrol further in regular Dutch education. Nevertheless we have been hearing from the teachers at Ithaka that some students were considering enrolling in media studies. We have heard stories that students used their video CV for part-time job applications. What also happens occasionally is that students reach out to us for more follow-up education. For example for specific media productions such as vlogs, or videoclips. I am currently assisting two students in steps towards producing their first rap videoclip. They have already been in a studio to record a song they have written. Another colleague of mine has followed up with providing more advanced editing classes to a student that was very keen and inspired to become a vlogger. You can see that the program triggers students’ motivation to produce. After MMM they feel more confident to do it and their interest is a confirmation to us that students really do want to learn these media production skills. We are still a young program and in development. Our ambition is to target the network of transition schools and that MMM becomes part of their curriculum.

Why Media and Information Literacy is the hot topic.

The necessity to understand the power of todays Internet.

Meet the people who use the web to change the world, is one top-reason to come to London and visit Mozilla Festival´s Week of Action (MozFest) from 22nd – 28th of October.

Never before has there been a need for media literacy like NOW!

"Ugandans have no public awareness for media literacy - despite the fact that 90% of young people are frequent and ardent media consumers", says Prossy Kawala.