Red Bull driver Max Verstappen won the Austrian Grand Prix on a nightmare day for Mercedes. Both drivers were forced to retire as Sebastian Vettel moved ahead of Lewis Hamilton in the driver's standings. 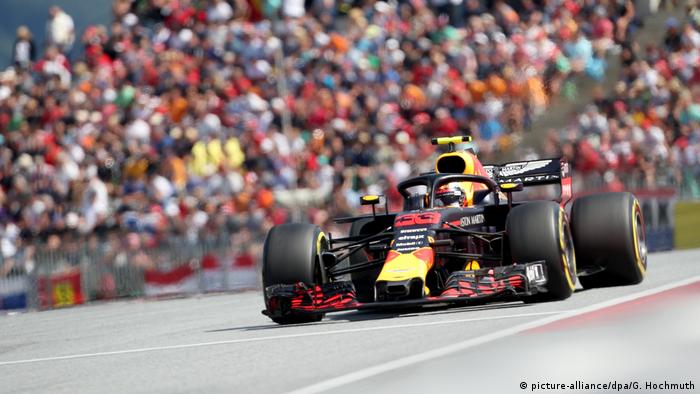 Driving on his team's home course, Red Bull driver Max Verstappen of the Netherlands took advantage of a catastrophic day for Mercedes to win the Austrian Grand Prix. Ferrari driver Sebastian Vettel also took advantage, as his third-place finish, coupled with Lewis Hamilton's failure to complete the race, allowed the German to overtake the Briton to go top of the drivers' standings by a single point.

The day had started so well for the Mercedes duo, with Valtteri Bottas and Hamilton starting at the front of the grid. Hamilton seized the lead in the first lap, but lost it when Bottas' gearbox broke down, causing a virtual safety car on Lap 14. The Briton's own race ended with engine failure on Lap 64.

Vettel managed to climb to third place, despite having been forced to start in sixth after receiving a three-place grid penalty for impeding a rival in qualifying.

Verstappen, who had started from fourth in the grid, held off a late charge from Kimi Raikkonen in the other Ferrari to celebrate his fourth career victory and first of the season.

Mercedes had dominated the Red Bull Ring in Spielberg since the Austrian Grand Prix returned to the F1 calendar in 2014 and that looked set to continue until an inexplicable error.

When Bottas lost his gearbox on lap 14, Red Bull and Ferrari quickly brought in both drivers for fresh tires, but the Mercedes garage did not make the same call for Hamilton. By the time he pitted on Lap 25, he re-emerged ahead of Vettel but behind both Red Bulls and Raikkonen.

"That is totally on us, sorry," an apologetic engineer told on team radio.

Hamilton had to pit again on Lap 53 and came out fifth behind Ricciardo but took that place back within a lap when the Red Bull's engine failed to ensure no happy returns on Ricciardo's 29th birthday.

Romain Grosjean (Haas) took his first points of the season in fourth and his teammate Kevin Magnussen was fifth.

Relive the action as it happened below:

Lap 69: It's looking like it's going to be Verstappen followed by the two Ferraris.

Lap 64: Now Hamilton is forced to pull off after he lost power. What a nightmare for Mercedes at Spielberg this year! This means

Lap 62: Verstappen has a lead of almost four seconds on Raikkonen.

Lap 57: Now  Brendon Hartley of Toro Rosso has been forced out. It looks like he too has sufferen a gearbox or hydraulics problem.

Lap 56: Now it's Verstappen ahead of Raikkonen, Vettel, Hamilton and Grosjean.

Lap 54: Ricciardo has lost gear sync - and pulls off the track.Hard luck on his 29th birthday!

Lap 53: It looks like Hamilton is going to pit. - he does. He goes to super soft. Returns to the track in fifth place, just behind Ricciardo.

Lap 50: With 21 laps to go, it's Verstappen, followed by Raikkonen, Vettel, Hamilton and Ricciardo.

Lap 41: Hamilton says he too now has a blister, "we have thrown away the win."

Lap 40: It's Verstappen in the lead, ahead of Raikkonen, Vettel, Hamilton and Ricciardo.

Lap 37: Bottas is interviewed by German RTL television. He says his gearbox had lost hydraulic pressure, which was very disappointing.

Lap 34: Raikkonen tells his team that Ricciardo's left rear tire has a big blister. His team tells him to push the Red Bull.

Lap 30: Verstappen still in front, ahead of Ricciardo, Raikkonen and Hamilton.

Lap 26: Hamilton pits. He returns to the track in fourth place, just ahead of Vettel. Max Verstappen has taken over the lead. The race officials have meanwhile confirmed that they won't take any action over an incident between Raikkonen and Verstappen on Lap 1.

Lap 24: Hamilton's lead over Verstappen is just under 13 seconds. Vettel is in fifth place, more than 22 seconds back.

Lap 20: Daniel Ricciardo trying to overtake Raikkonen - and he does!

Lap 17: Hamilton has a 13-second lead over Verstappen in second.

Lap 14: Bottas has been forced off, it looks like a gearbox problem. What a disappointment for the polesitter, who won here last year. Yes, it was clearly his gearbox. So both he and Hulkenberg are out early.

Lap 12: Nico Hulkenberg's been forced out. His engine is on fire! Yellow flag phase.

Lap 8: Ferrari's Kimi Raikkonen reports on team radio that he drove over some rubble on Turn 3.

Lap 6: Hamilton remains in the lead ahead of Bottas and Max Verstappen. Hamilton's lead is now 2.5 seconds ahead of his Mercedes teammate.

Lap 3: Bottas had fallen back as far as fourth, but is back behind Hamilton in second. Vettel is in sixth place.

15:05: We're just a few minutes from the start of the Austrian Grand Prix in Spielberg. It will be the two Mercedes starting from the front row. Can Lewis Hamilton increase his lead at the top of the drivers' standings?

14:35 CEST: Starting from second in the grid, Mercedes driver 1Lewis Hamilton will have a good chance to build on his 14-point lead atop the Formula One drivers' standings lead this Sunday, after German rival Sebastian Vettel was penalized for a qualifying error. His Ferrari was deemed to have "unnecessarily impeded" Renault's Carlos Sainz in the second qualifying session on Saturday and the stewards slapped him with a three-place grid penalty. Having qualified third, Vettel will now begin from sixth place in the grid.

For Valtteri Bottas this is the fifth pole position of his career and he earned it by setting a course record lap of 1 minute 3.130 seconds. Hamilton finished 0.019 seconds adrift on his final lap. Bottas will also be looking to win in Spielberg for a second consecutive year.

Fernando Alonso's hopes of scoring points on the Red Bull Ring took a blow earlier on Sunday when McLaren said the Spaniard would be starting from the pit lane as a result of overnight changes to his car.

Valtteri Bottas won the Austrian Grand Prix for Mercedes in a thrilling finish ahead of Sebastian Vettel of Ferrari. Daniel Ricciardo was third. (09.07.2017)