Max Verstappen finished ahead of Lewis Hamilton to claim victory in the Malaysian Grand Prix. Sebastian Vettel fought back from the back of the grid to finish fourth but lost more ground in the title race. 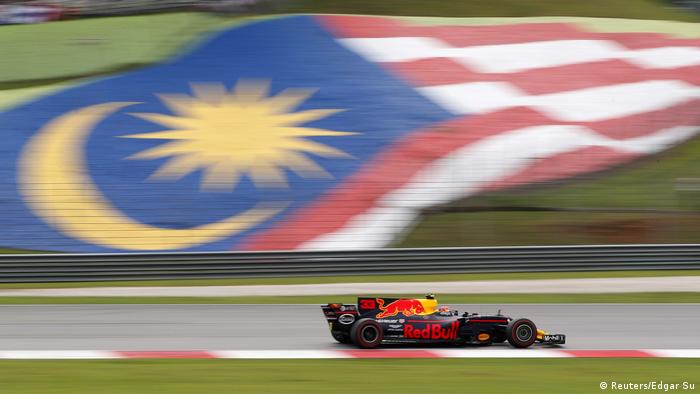 Verstappen, starting from second after Kimi Raikkonen's Ferrari failed to make the grid, overtook pole-sitter Hamilton on lap four before clinching the second victory of his career and first this season.

Vettel started the race from last but drove brilliantly to take fourth place and limit the damage to his title hopes.

The day after turning 20, Verstappen turned on the style, making a fine move to overtake Hamilton on lap 4 and then held his nerve with his father watching from the team garage. 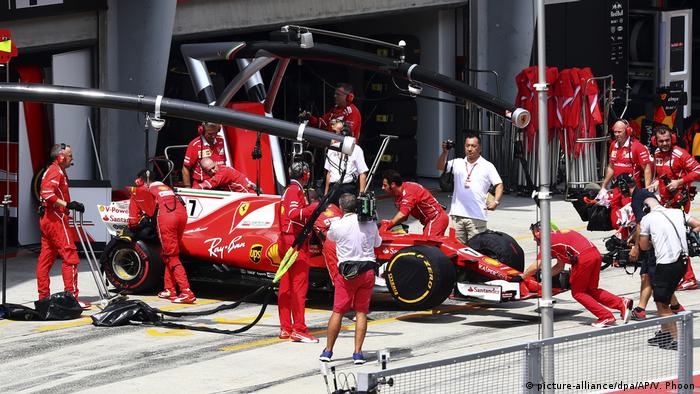 Lap 55/56 We're heading to a Verstappen-Hamilton-Ricciardo podium. Vettel will be fourth.

Lap 54/56 All Verstappen has to do now is get to the chequered flag and victory is his.

Lap 53/56 Vettel is 2.6 seconds behind Ricciardo now, so maybe that battle is over and Vettel will probably have to settle for fourth. It's been a valiant effort though.

Lap 46/56 Ten laps to go and Vettel has the advantage of super-soft tyres. He's about to get DRS activation as well, so a podium finish is not beyond possible.

Lap 44/56 "Vettel will be with you in four or five laps - keep pushing." Red Bull to Ricciardo.

Lap 42/56 A very nervy lap from Verstappen. He still leads and Hamilton isn't eating into the lead. This race remains Verstappen's to lose.

Lap 34/56 Verstappen has put some work in to rebuild his lead after Hamilton trimmed it during the pitstops. He's 8.1 seconds clear again now.

Lap 32/56 It's all kicking off. "What an idiot," Alonso rages after clashing with Magnussen. "Hulkenberg is right." Ocon now swears down the radio, saying Massa "pushed me off again"

Lap 29/56 There are 29 seconds between Hamilton and Vettel.

Lap 28/56 Verstappen has already pitted and now Vettel also comes in, so Red Bull have decided to extend Ricciardo’s first stint. He’s now in the lead, with Bottas, Perez and Sainz the other runners in the top 10 who haven’t yet pitted.

Lap 26/56 Hamilton comes in at the end of the lap. He’s the first of the top three to go in. There’s no drama and he’s straight out again.

Lap 23/56 Vettel is only two seconds behind Bottas now. He's swallowing them up one by one...

Lap 22/56 At the front, Verstappen is being held by Hamilton, he’s failed to add anything more to his lead across that lap.

Lap 21/56 Vettel is beyond Perez and into fifth.  The Force India didn’t give up easily, but Sebastian had too much power. Now things should get interesting.

Lap 18/56 Incredible pace on the soft tyres from Vettel, who is only 5.8 seconds behind Perez and catching him at a second a lap. By lap 24, Vettel should be past him and into fifth.

Lap 17/56 Ricciardo is 5.6 seconds behind Hamilton now, down from eight!

Lap 16/56 Bottas is having to up his pace to respond to the challenge of Perez, who is closing in on the second Mercedes.

Lap 13/56 It’s six seconds from first to second, and from second to third. Down the field, Vettel jumps up to sixth as Vandoorne enters the pits.

Lap 12/56 Hamilton is updated on Vettel's progress, and is told "just be aware, he may be a threat towards the end of the race".

Lap 11/56 Hulkenberg's reported an error message to his team – going from bad to worse for the German today.

Lap 10/56 Vettel has also cleared Alonso, so is on for one world championship point as it stands. He's 23 seconds off the race lead.

Lap 9/56 Bottas goes wheel-to-wheel with Ricciardo but he manages to squeeze past the Australian.

Lap 8/56 Raikkonen will not play any part in this race. The Finn is officially retired from the Grand Prix.

Lap 4/56 Max Verstappen darts in front of Hamilton to take the lead!

Lap 3/56 Raikkonen remains in the pits and his race appears to be over. A real shame for the Finn.

Lap 2/56 Vettel is already up to 12th - seven places up - but his Ferrari teammate Kimi Raikkonen seems to have stalled.

Lap 1/56 It's go and Hamilton leads from Verstappen, who fights off a determined challenge from Bottas. Everyone looks to be safely through the first corner.

08.45 Hello and welcome to live commentary from a potentially crucial race in the F1 season in Malaysia. Can Vettel make any impact on this race from the back of the grid?