An appeals court in Mauritania overturned three convictions and reduced the sentences of 10 other anti-slavery activists for their alleged role in a riot in June. Three remain in prison. 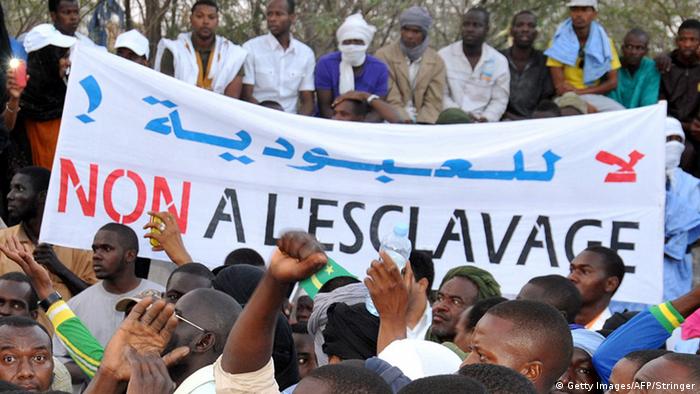 A Mauritanian appeals court overturned three convictions and reduced the sentences of 10 other anti-slavery activists Friday for their alleged role in a riot in June.

The 13 activists are members of the Initiative for the Resurgence of the Abolitionist Movement (IRA). They were sentenced in August to up to 15 years in prison after a protest against eviction by residents of a slum in the Mauritanian capital, Nouakchott. Many of the protesters were former slaves. The 13 activists were initially convicted of using violence, attacking security, gathering while armed and being a part of an unrecognized organization - namely, the IRA.

UN experts said the trial was marred by rights violations, including torture in detention and irregularities during court proceedings.

Despite slavery officially being outlawed in Mauritania in 1981, the West African nation remains a hotbed of slavery. Modern-day slavery in Mauritania exists under a caste system of servitude that forces those in the "slave" caste to work as cattle herders or domestic servants without pay.

Mauritania has tried to crack down on slavery and passed a law in 2015 that made slavery a crime against humanity. But campaigners say this is not enough to eradicate the practice in the West African nation.

Some 30 million people around the world are believed to be living in slavery, according to a new global index. Many of those in modern slavery are trafficked for sex work or unskilled labor. (17.10.2013)

As slave trade abolition is celebrated, millions of Africans continue to live as slaves

The transatlantic slave-trade was officially abolished more than two centuries ago, but more than six million people in Africa continue to live under slave-like conditions, many of them in the sub-Saharan region. (24.03.2015)