Former pharmaceutical executive Martin Shkreli has been sent to jail for soliciting assault, when he encouraged followers to steal a strand of Hillary Clinton's hair. A federal judge deemed him a threat to the community. 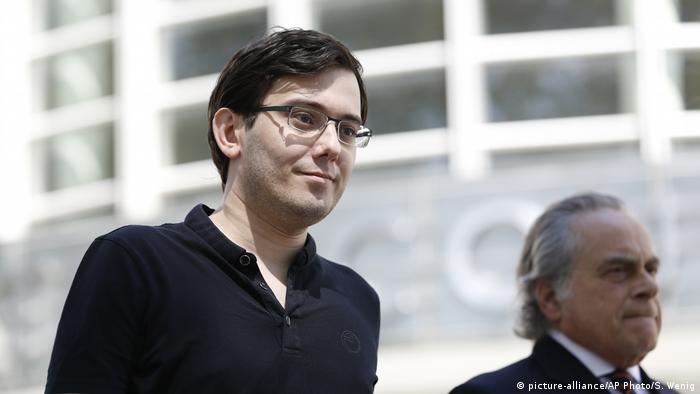 Disgraced former pharmaceutical executive Martin Shkreli had his bail revoked and was sent to jail on Wednesday for encouraging assault.

The move came after Shkreli recently wrote on Facebook that he would give $5,000 (around 4,200 euros) to anyone who plucked a hair from Hillary Clinton's head during her upcoming book tour.

"This is not protected by the First Amendment," said Judge Kiyo Matsumoto as she revoked Shkreli's $5 million bail, citing the security concerns felt by the Secret Service agents who protect Clinton as a former first lady.

Shkreli had told the court earlier via a written statement that he was sorry for his post, which his defense had painted as political satire, and that he is "not a violent person."

"It never occurred to me that my awkward attempt at humor or satire would cause Mrs. Clinton or the Secret Service any distress," he added.

'The Most Hated Man in America'

The entrepreneur, dubbed "Pharma Bro" by the media, will now stay in jail as he awaits sentencing after his August conviction on securities fraud for mismanaging two investment funds.

Shkreli gained notoriety in September 2015 when his company Turing Pharmaceuticals bought the rights to the anti-parasitic drug Daraprim, used in treating a strain of pneumonia often contracted by people with weakened with immune systems, and hiked the price of $13.50 per pill to $700. He was known as "The Most Hated Man in America."

His sentencing for securities fraud is scheduled for January. He faces up to 20 years in prison.

Martin Shkreli could face 20 years in prison for securities fraud if found guilty. The ex-head of a pharmaceuticals firm is known for having bought rights to a life-saving medicine and raising its price by 5,000 percent. (29.06.2017)

Former Turing Pharmaceuticals CEO Martin Shkreli has gravely insulted members of the US Congress after refusing to testify in a hearing. Lawmakers wanted to find out more about drug price increases he had engineered. (04.02.2016)