Despite a lackluster 2-1 victory against Saudi Arabia, the German team had a shining light in Leverkusen in Marco Reus. The injury-prone winger is ready to make up for lost time. 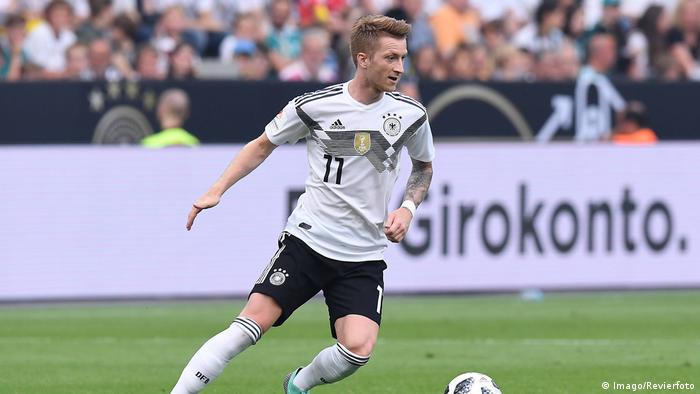 Marco Reus has been waiting four years for his moment – the Borussia Dortmund player is only days away from playing at his first World Cup and after his performance against Saudi Arabia, he can possibly expect to be a starter in Joachim Löw's team.

"I'm happy that Marco is part of our team this time around, he can make an impact and will play an essential role in helping us get far in this tournament,” the Germany coach said after the match.

Injuries have plagued Reus throughout a large part of his career. Most famously in 2014 when an ankle injury ruled him out from the German squad that went on to win the tournament in Brazil. Back then a devastated Reus said that his dream ended from one second to the next. But this time it was a different story.

"I didn't really think about getting hurt tonight, I was just concentrated on the game,” said Reus after the 2-1 victory against Saudi Arabia. Reus was actively involved in both German goals – he provided an assist in Germany's first goal and it was one of his passes that lead to the second goal as well.

Earlier this week, Löw's decision to omit Manchester City's Leroy Sané from his World Cup squad sent shock waves through the footballing world. But Löw can brush off the PFA Young Player of the Year winner due to Germany's talent, namely the caliber of Marco Reus.

The 29-year-old played just shy of an hour but it was during that time that Germany looked most dangerous. His speed and control on the ball set the pace of the German attack along with the likes of RB Leipzig striker Timo Werner. He is the type of player that can make the difference for Germany in crucial moments.

Reus is making a strong case for starting at his position ahead of Paris Saint-Germain's Julian Draxler and Bayer Leverkusen's Julian Brandt and will most likely be expected to link up as a playmaker with Arsenal's Mesut Özil.

"I'm still not sure how the starting eleven will look like next week,” said Löw reluctantly when asked about Reus making his World Cup debut against Mexico. "What I do know is that the team that will play the first match won't play throughout the whole tournament. What's important to us is to have people who can change the game off the bench,” added Löw.

Marco Reus was not the only injury-hit player in the starting line-up. Goalkeeper Manuel Neuer and defender Jerome Boateng got 45 minutes under their belts as they continue on the road back to full fitness. With the Bayern duo back in action and Reus looking sharp Germany are getting close to full strength as the tournament nears.

Although this performance may not have looked like the world champions getting up to full flow, Germany are famous for hitting peak form at major tournaments. The return of this trio makes that a dangerous proposition for the pretenders to their crown.

World Cup Russia 2018: How safe and comfortable will fans feel?

Hooligans, hackers and discrimination: These are the things that have been making the headlines ahead of the 2018 World Cup. Russian officials, though, say fans should feel welcome and safe. So what should they expect? (08.06.2018)