Many hurt after van runs over pedestrians on London Bridge

Several pedestrians have reportedly been hurt after a van veered off the road on London Bridge. Police are responding to two other security incidents nearby. 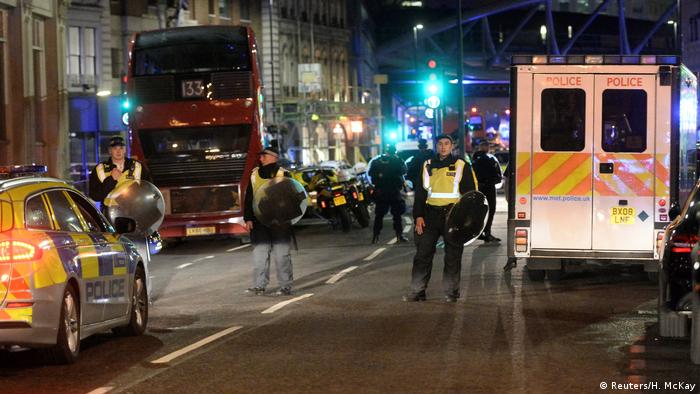 Emergency services rushed to London Bridge on Saturday night where multiple pedestrians had been hit by a van. Soon afterwards, police reported shots had been fired at nearby Borough Market after officers responded to a stabbing incident there.

Police added that they had also been called to a third incident in Vauxhall in London's south, without providing further details.

The BBC reported that police were searching for three suspects and had set up a wide cordon around the London Bridge area.

A witness at London Bridge, which crosses the Thames River, told the BBC she saw a speeding white vehicle hit up to six people.

The Ambulance Service sent "multiple resources" to the scene and urged people to avoid the area.

London's transport authority said London Bridge rail station had been closed at the request of the police.

Prime Minister Theresa May has been informed of the situation and is in contact with officials, Downing Street said. The White House said US President Donald Trump had also been briefed by his national security team.

The incident comes less than two weeks after a suicide bomber killed 22 people at an Ariana Grande pop concert in the northern city of Manchester.

In March, a lone attacker mowed his car into pedestrians on Westminster Bridge, killing four people and wounding dozens more. He then stabbed a police officer to death outside the Houses of Parliament before being shot dead by security forces.

UK officials are investigating a deadly attack near the Houses of Parliament. Some of those who witnessed the events spoke with DW's Abigail Frymann Rouch in London. (22.03.2017)

London's Metropolitan Police took a man into custody as part of a "stop and search" operation. He was detained in Whitehall - the political heart of the UK - near the site of last month's deadly terror attack. (27.04.2017)