At least 36 people have been killed and 150 wounded in multiple suicide bombings at Istanbul's international Ataturk airport. Turkey's prime minister has laid the blame on the so-called "Islamic State" militant group. 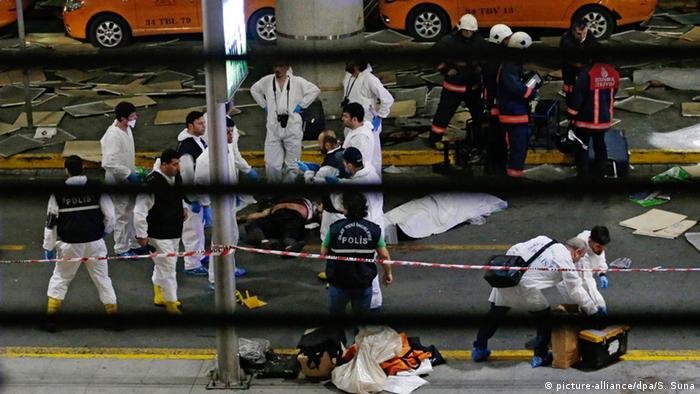 Turkish media and officials say up to three attackers detonated their explosives near the security check-in at Istanbul's Ataturk airport late on Tuesday.

Turkish Prime Minister Binali Yildirim said 36 people died in the attack, adding the evidence of responsibility points to the so-called "Islamic State" (IS) militant group, although no group had yet claimed responsibility.

He added the suspects arrived at the airport by taxi and opened fire on passengers with automatic rifles, before blowing themselves up.

Videos on social media showed panicked passengers amid sounds of gunfire and the arrival of ambulances. Roads around the airport were sealed off to regular traffic.

The private DHA news agency said the wounded, among them police officers, were being transfered to the region's Bakirkoy State Hospital.

In a statement, Turkish President Recep Tayyip Erdogan said the attack aimed to undermine Turkey, and called for a joint international anti-terror "fight."

"If states, as all humanity, fail to join forces and wage a joint fight against terrorist organisations, all the possibilities that we dread in our minds will come true one by one," Erdogan said.

"We grieve for the victims and with the relatives. We stand by Turkey," he said from Berlin.

Hours after the attack, the US Federal Aviation Administration halted all US flights bound for Istanbul, and flights originating from Istanbul bound for the US.

The White House condemned "in the strongest possible terms" the attack on Istanbul airport, saying the US remained steadfast in its support for Turkey.

Ataturk is Turkey's largest airport and a major transport hub for international travelers. It ranks as the world's 11th busiest airport, with 62 million passengers last year.

Reuters quoted a Turkish Airlines official as saying authorities had halted the takeoff of scheduled flights. Passengers were transfered to hotels. An airport official said some flights had been diverted away from Ataturk.

Turkey has been hit by a spate of bombings this year, including two suicide attacks in tourist areas of Istanbul blamed on so-called "Islamic State" (IS) militants and one attack attributed to Kurdish militants.

On June 7, a car bomb ripped through a police bus in central Istanbul during the morning rush hour, killing 11 people and wounding 36.

Turkey, which is part of the U.S.-led coalition against IS, is also fighting Kurdish militants in its largely Kurdish southeast.