Manuel Neuer in Croatia: Did the Bayern Munich star know what he was singing? | Sports | German football and major international sports news | DW | 15.07.2020

Manuel Neuer in Croatia: Did the Bayern Munich star know what he was singing?

Bayern Munich captain Manuel Neuer was filmed on holiday in Croatia singing a controversial local folk song. Did the German goalkeeper know what he was singing? 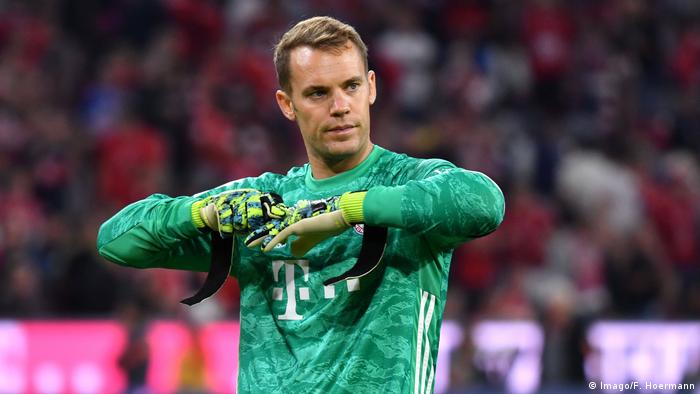 In a picturesque beach bar on Croatia's Adriatic coast, the sun is shining, the accordions are playing and the beer is flowing.

A dozen men are swaying and singing along to a Croatian pop song – among them, Bayern Munich and Germany goalkeeper Manuel Neuer, enjoying a holiday with friends after winning the league and cup double.

But it's not just any old pop song. "Lijepa li si" ("You are beautiful") is a patriotic hit by Croatian singer Marko Perkovic and his band "Thompson" – named after the manufacturer of Perkovic's machine gun during his service in the war in Croatia 1991-1995.

Perkovic is known for his songs with religious, nationalistic and even fascist connotations. In "Lijepa li si," for example, parts of the neighboring state of Bosnia-Herzegovina which are inhabited by Croatians are claimed as parts of Croatia.

Another well-known Thompson song, "Bojna Cavoglave," named after a Croatian military battalion, begins with the phrase "Za dom – spremni!" ("Ready for the fatherland!") – a salute used by the fascist Ustasha regime in the 1940s which was allied with Nazi Germany and carried out genocides against Serbs, Jews and Roma.

Croatia's Constitutional Court has ruled that the phrase amounts to incitement of hatred but, despite singing it, Perkovic has been acquitted on a several occasions. Nevertheless, the ideological position of he and his band in Croatian culture is clear. Nazi salutes have been seen at Thompson concerts and performances have been banned in Germany, Austria and Switzerland.

"Anybody who deals with Croatia knows what views Thompson represents in his songs," said Danijel Majic, a German journalist of Croatian heritage in an interview with German broadcaster Deutschlandfunk. "How he posed with Ustasha memorabilia and pictures in the 90s, how he has openly admitted that he has no problem with the Ustasha."

In 2012, Neuer's former Bayern teammate Mario Mandzukic celebrated a goal for Croatia by saluting symbolically in front of generals Ante Gotovina and Mladen Markac, who were at the time on trial for war crimes at The Hague. A year later, after securing qualification for the 2014 World Cup, Josip Simunic grabbed the stadium microphone and led the crowd in chants of "Za dom – spremni!"

During the national team's historic run to the World Cup final in Russia in 2018, the Croatian players were filmed singing "Bojna Cavoglave" in the dressing room after the 3-0 group stage victory over Argentina. Upon their return to Zagreb following defeat to France in the final, Perkovic accompanied the players, singing "Lijepa li si" on the team bus. The song has become something of an unofficial national anthem for Croatian football fans. 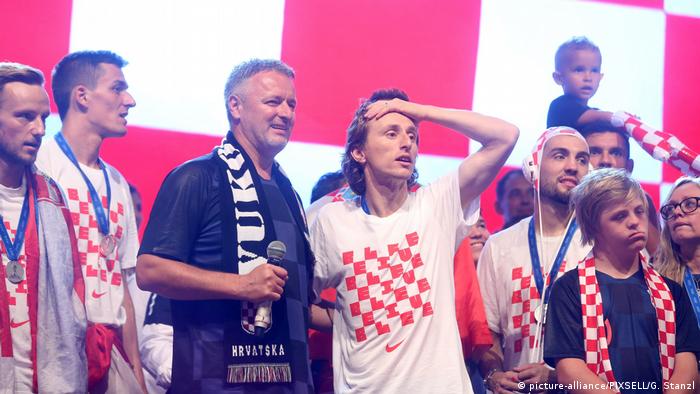 Luka Modric and Croatian teammates with Marko "Thompson" Perkovic after finishing runners-up at the 2018 World Cup. Perkovic's scarf bears the name "Vukovar," the scene of a key battle during the break-up of Yugoslavia in 1991.

So, was Manuel Neuer aware of the connotations of what he was singing in the beach bar on the coast?

In a statement, the goalkeeper's management insisted that their client doesn't speak Croatian, a claim disputed by local newspaper Dubrovacki Vjesnik. "Neuer obviously knows the words off by heart," it wrote. "It is known that Neuer understands Croatian quite well but can't really speak it."

Neuer has long had a close connection to the Balkan country, visiting regularly with his goalkeeping coach and close friend Toni Tapalovic, who has Croatian roots and is also visible in the video.

"Manu [Neuer] is one of us," said Ivan Rakitic, Croatian international and former teammate of Neuer's at Schalke, to German broadcaster Sport1. "We are incredibly proud that he always comes to Croatia and feels so comfortable here."

Neuer himself has never given reason to believe that he sympathizes with extreme right-wing views. Nevertheless, given his connections to Croatian players and his experience of Croatian culture and language, it is hard to believe he didn't know the meaning of one of the country's most well-known pop songs.