Jose Mourinho's United proved too much for a young Ajax team that couldn't break down Manchester's defense. Goals from Paul Pogba and Henrikh Mkhitaryan made the difference, sending United to the Champions League. 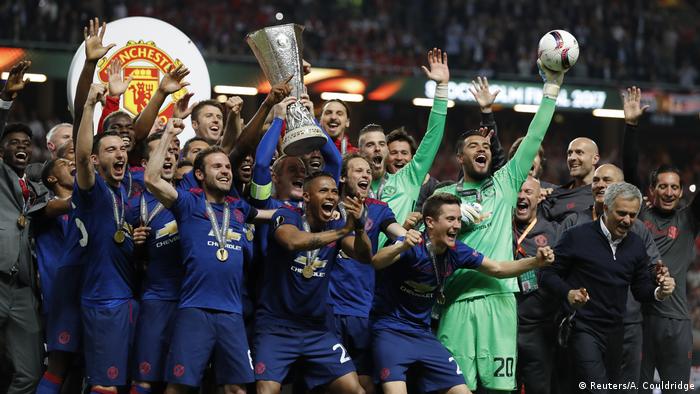 Manchester United triumphed in a European final played in the shadow of Monday's attack on a concert in Manchester. The impacts were clear from the outset, with a shortened opening ceremony, a minute's silence before the off, and a United side sporting black armbands. One fan in the stands captured the mood with a placard declaring: "Manchester, UNITED we stand."

"We know things like this are very sad all over the world," scorer Paul Pogba told UK broadcaster BT Sport after the game. "We had to focus. Manchester - we won for them. We played for England, we played for Manchester and we played for them - the people who died."

The game, meanwhile, pitted the youngest starting XI in the history of European finals (with Ajax boasting an average age of just 22 years and 282 days) against one of the most expensive teams ever assembled. In the end, United's discipline and extra quality in the final third made the difference - along with a helpful slice of luck to break the deadlock. 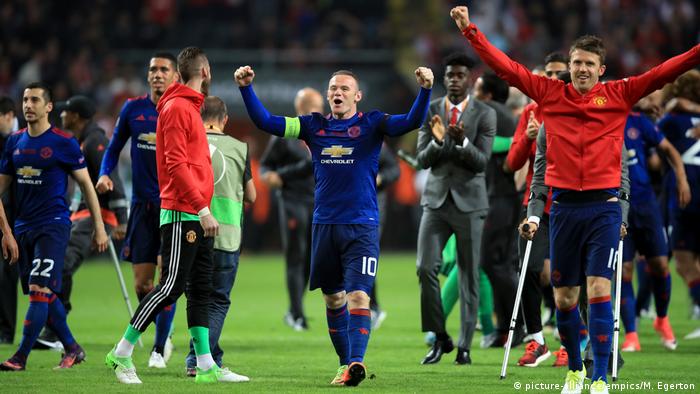 Paul Pogba's opening goal took a huge deflection on its way past Andre Onana, who managed to get his fingertips to the ball but still couldn't stop the shot. Pogba was credited with the goal, although some argued it should have gone down as an own goal, saying the original strike was off target until its trajectory was altered.

Ajax struggled to really threaten an equalizer in the remainder of the first half, rarely turning the superiority in terms of possession into any real looks at goal.

Six of the best from Mkhitaryan

Almost immediately after the restart, Henrikh Mkhitaryan put matters to bed for Jose Mourinho's team. The Armenian improvised well after Chris Smalling headed down a United corner, deftly flicking the ball past Onana to make it 2-0. Mkhitaryan therefore didn't just become the first Armenian to compete in a European club final, he netted to boot. The attacking midfielder has scored six, more than any other United player, in the competition. With a cushion, United's organized back line began to look even more assured as Ajax continued to probe without ever really penetrating.

Club captain Wayne Rooney was even able to jump off the bench, play the last few minutes of stoppage time and then lift the trophy for United. It could have been his final game for the club. Injured star striker Zlatan Ibrahimovic was also on site, at one point renaming Solna's "Friends Arena" as the "Zlatan Arena" in a typically cheeky, hubris-laden Instagram post to his followers.

As well as a European trophy in Jose Mourinho's first season in charge, United also rescue Champions League football for next season with this win. Having missed out on the top-four league finish needed to reach the Champions League, winning Wednesday's final gives the club a back door into next season's competition.

What's more, United had never before won the Europa League, or the competition commonly considered its predecessor, the UEFA Cup. It was the lone trophy missing from the cabinet back at Old Trafford, until Wednesday.

You can re-read our minute-by-minute coverage here.

Jose Mourinho's men are the favorites going into the final, to be held at the Friends Arena in Stockholm. However, they will be facing the most talented young squad Ajax have produced in years. (23.05.2017)

The English club are set to take on Ajax in the Europa League final in Stockholm. Players from both clubs have sent messages of support to the victims of the concert attack in Manchester, that killed 22 people. (23.05.2017)

Manchester United and Ajax both lived dangerously despite first-leg leads to secure a Europa League final meeting in Stockholm on May 24. Both sides went in front on Thursday but both came close to throwing it away. (11.05.2017)