Male or female - is our sex always clearly defined?

Researchers found that more than 500 fish species can change their sex. Even for humans, sex is not always as clearly defined as we think. 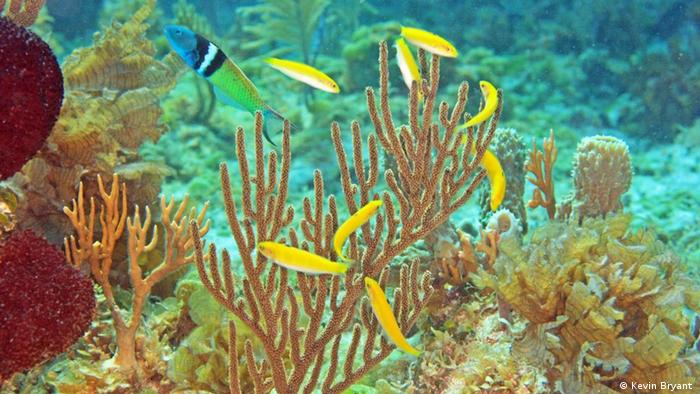 Swarms of yellow bluehead wrasse females make their way through the coral reefs of the Caribbean. The name of the fish stems from the blue head of the only male in the swarm. As soon as the male dies, the largest female turns into a new male. It can change its behavior in 10 minutes, its sex in 10 days. Without any difference in the genes, it gets a blue head and its ovary becomes a testis.

Researchers from Australia, New Zealand and the US have just found out how this works. A chemical signal is emitted activating certain genes and deactivating others, explains researcher Jenny Graves from the Australian La Trobe University in Melbourne. Around 500 other fish species can change their sex in adulthood as well.

Some reptiles have been shown to change sex as embryos in the egg. At a certain temperature, females hatch, while males hatch at another. The change in temperature activates or deactivates certain genes.

No natural gender change has been detected in mammals. But studies with mice show that when researchers activate certain genes in the testicular, cells can transform into ovarian cells.

Even for humans, sex is not always clearly defined. Typically, there is the male XY chromosome pair and the female XX chromosome pair. But chromosomes do not determine sex alone. Scientists assume that there are about 1000 genes that can influence the sex. "And then there's the regulation of genes, hormones, hormone receptors, testicles, ovaries, and external genitalia," says Heinz-Jürgen Voß, biologist and social scientist at Merseburg University of Applied Sciences.

This can lead to deviations that are often not noticed at all. In the International Journal of Surgery Case Reports, surgeons in Kashmir, India, report the operation of a 70-year old man's hernia in which they found a uterus and fallopian tubes. The father of four was completely unaware of his uterus until then. There are also people with XX chromosomes but external male genitals and testicles.

Rare are people with testicles and ovaries, a uterus and a prostate as well as a penis and a vagina.

Not male, not female - then what?

People whose sex-defining parameters are not completely male or female are described as intersexual. Experts say this applies to 0.05 to 1.7 percent of the global population - depending on definition and estimation. To compare, less than two percent of the world's population has red hair. However, intersexuality does not necessarily mean that they are attracted to both sexes. Intersexual also does not mean the same as transsexual. Transsexuals have a distinct biological sex but feel they are not in the "right" body.

Around 1900 medical operations are performed annually in Germany on intersexual children under the age of 10 in order to assign  a clear sex. The number has not decreased since 2005, says sociologist Ulrike Klöppel. "Later in life, many intersex people who underwent operations as a child struggle with their assigned gender and still cannot fit into one of two categories,” says Voß.

Sex is therefore not always clearly male or female. But in many countries intersexuality is not legal. In Germany, a law was passed this year that allowed people for the first time to enter "diverse" as their official sex. Since 2013, it has been permitted to leave the gender designation open for a newborn. In 2017, the Federal Constitutional Court decided this situation would violate personality rights and the anti-discrimination law. Now, at the age of 14, all Germans can register their sex as "diverse."

Hans Jürgen Voß would like for every person to be able to register their gender themselves without a medical proof of intersexuality. This is the case in Argentina and Malta, for example. He says if that many different factors influence gender, the own perceived gender identity would be the strongest parameter.

"Everyone should just be asked so they can decide for themselves,” Voß concludes.

A new study has revealed the extent to which male apes use sexual intimidation to control their mates. This could extend to our most familiar primate - humans. (06.07.2017)