The ruling monarch of Malaysia has abdicated the throne, palace officials have confirmed. The historic move follows weeks of speculation over the love life of Muhammad V. 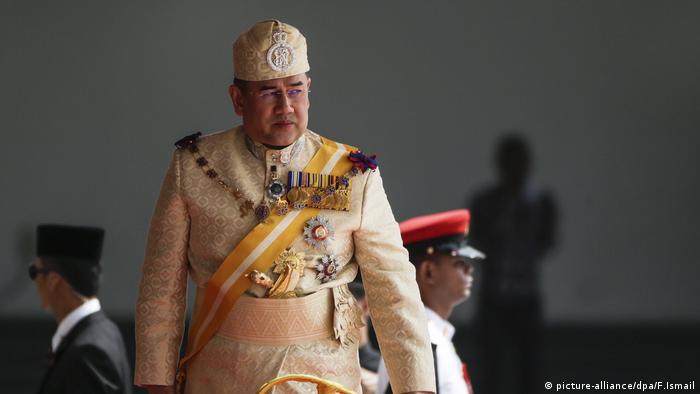 Malaysia's King Muhammad V stepped down from the throne on Sunday.

It is the first time a ruling monarch has abdicated before the end of a five-year term since Malaysia gained its independence from Britain in 1957.

Muhammad V was selected in October 2016 as Malaysia's head of state.

He is also the ruling sultan of Kelantan, one of Malaysia's nine states.

Muhammad V, Malaysia's 15th king, had recently taken a leave of absence for medical reasons. Over the past weeks, rumors had surfaced in Russian and British media that he had married a former Russian beauty queen. The wedding reportedly took place in Moscow.

The palace has not yet commented on the rumors.

Malaysia has an elective constitutional monarchy at the national level. The king, or Yang di-Pertuan Agong, is elected every five years by a council of state rulers, or whenever a vacancy occurs. Only state rulers, all members of centuries-old Islamic families, are eligible to rule the country as king.

After visiting Beijing, Malaysia's PM Mahathir has canceled a number of Chinese infrastructure projects, saying his debt-ridden country cannot afford them at this moment. Will the move sour Malaysia's ties with China? (21.08.2018)