A Malaysian airliner has crashed in eastern Ukraine near Donetsk. The Boeing 777 was flying from Amsterdan to Kuala Lumpur. Malaysia Airlines says it has lost contact with its Flight MH17. 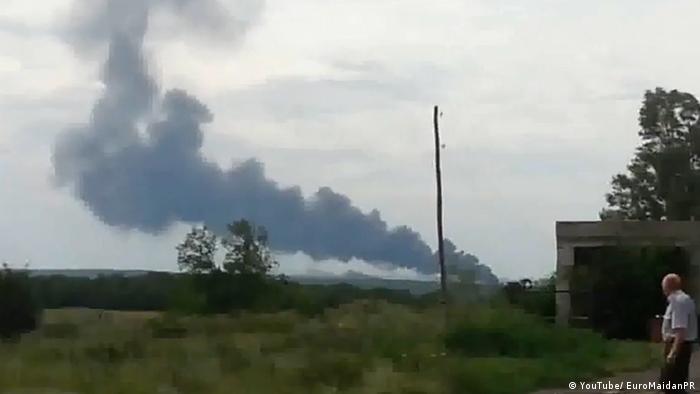 Reuters cited a Russian aviation industry source on Thursday as saying a Malaysian airliner did not enter Russian airspace when expected.

Interfax claimed the plane was shot down at an altitude of 10 kilometers above eastern Ukraine, allegedly by a "Buk ground-to-air missile."

Reuters said one of its correspondents had sighted burning wreckage and bodies at a crash scene, near a village identified as Grabovo in eastern Ukraine.

It quoted an emergency services workers as saying debris, including broken wings, was scattered over an area 15 kilometers (nine miles) in diameter.

Visible were blue and red paint, matching the colors of the missing Malaysian airline.

"The last known position was over Ukrainian airspace," it added.

Anton Gerashenko, an adviser to Ukraine's interior minister, said on his Facebook page the plane was flying at an altitude of 10,000 meters (33,000 feet) when it was hit by a missile fired from a Buk launcher.

A spokeswoman for Ukrainian Prime Minister Areseni Yatsenyuk had ordered an investigation into the "airplane catastrophe" in eastern Ukraine.

The plane had come down near the city of Donetsk, stronghold of pro-Russian rebels, Gerashshenko said. Another Ukrainian official identified the crash site as Torez, near Shakhtersk, some 40 kilometers (25 miles) from Ukraine's border with Russia.

The area has been the scene of fighting between Ukrainian troops and pro-Russian rebels.

Russian and Ukrainian news agencies identified the plane as a Boeing 777.

Malaysia Airlines is still reeling from the disappearance of another of its Boeing 777s over the Indian Ocean on March 8 when Flight MH370 veered off course while en route from Kuala Lumpur to Beijing.

Malaysia's defence minister Hishammuddin Hussein said on Twitter: "No confirmation it was shot down."

"Our military has been instructed to get on it," he said.

Earlier on Thursday, Ukraine had accused Russia of shooting down a Ukrainian fighter jet - an accusation that Moscow denied.

Interfax quoted Andrei Purgin, a leader of the self-proclaimed Donetsk People's Republic, as saying the insurgents had no Russian-made "Buk" missile systems.

The United States has blacklisted major Russian financial and energy companies over the conflict in Ukraine. Meanwhile, the European Union has moved to impose similar sanctions by the end of this month. (16.07.2014)

The US has accused Russia of again building up its forces along the border with eastern Ukraine, where fighting continues. Kyiv says its troops have battled separatists around three Ukrainian border towns. (16.07.2014)