Thousands of Malays have taken to the streets in support of the prime minister. Police fired water cannons at protesters attempting to breach barricades blocking access to the capital's Chinese-dominated neighborhoods. 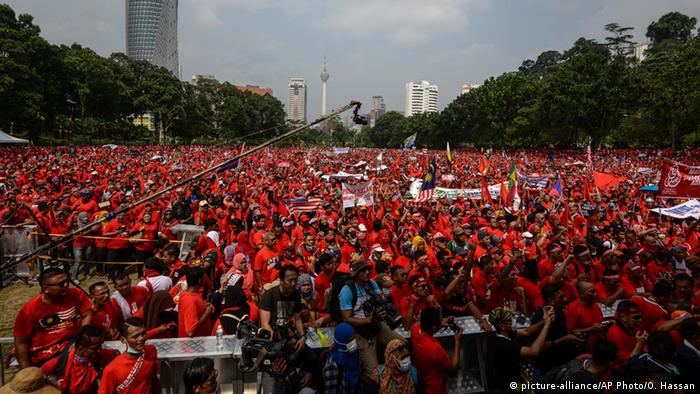 A demonstration organized by figures in the ruling United Malays National Organization (UMNO) drew tens of thousands of ethnic Malays on Wednesday in support of Prime Minister Najib Razak.

Police in Kuala Lumpur fired water cannons at the demonstrators after they attempted to breach barricades leading to the capital's predominantly Chinese neighborhoods.

Despite a heavy security presence in the streets, Chinese businesses shuttered their shops in fear that the demonstration could turn violent.

The rally was organized in response to a 2-day mass protest in August calling for the prime minister's resignation following allegations he misappropriated state funds from the indebted 1Malaysia Development Berhad (1MDB).

Today's rally aslo accused the organizers of August's protest - a pro-democracy group called Berish - of undermining Malay rule while claiming its most of the attendees were Chinese.

Meanwhile, the rally was criticized for fomenting racial tensions, with protesters chanting "Long live the Malays" and "Rise Malays rise."

Religion and politics are sensitive issues in Malaysian politics, with the deadly sectarian riots of 1969 often cited for the need to maintain ethnic harmony in a country where Malays make up around 60 percent of the population, Chinese comprising 25 percent and Indians close to 7 percent.

Prime Minister Razak warned of polarization in a speech delivered in the state of Sabab to commemorate the formation of the Malaysia federation in 1963.

"It is not right to organize rallies dominated by one race, with the expressed aim of toppling the government," Razak said, according to state-run news agency Bernama.

"As we have seen, this then leads to rallies by other races. This could not be more dangerous and risks tearing apart the fabric of our democracy, our harmony, our unity," Razak added.

The prime minister has struggled politically after documents showed he received nearly $700 million (623 million euros) into his personal accounts. Razak has defended himself by saying they were "political contributions" from unspecified donors in the Middle East.