The man who attacked two female police officers with a machete in Charleroi, Belgium, has died after being shot by police. Belgium's prime minister said "preliminary indications" pointed to an act of terrorism. 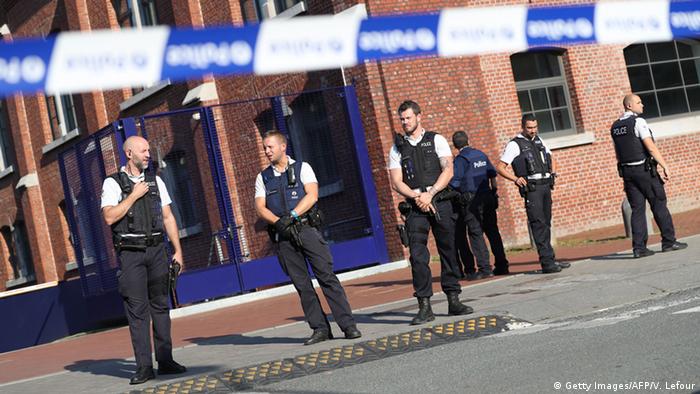 A man wielding a machete injured two female police officers in the Belgian city of Charleroi on Saturday, according to police and local media reports.

Police in Charleroi, a city 50 kilometers (30 miles) south of Brussels, tweeted that two officers had been injured by an assailant who shouted "Allahu Akbar" (God is greatest) during the attack.

The assailant later died of his injuries in hospital, according to local police.

The mayor of Charleroi, Paul Magnette, said the attack took place at a wooden structure erected outside the police station to provide extra security.

Magnette said the checkpoint prevented the attacker from further entering the building.

One officer sustained deep cuts around her face and has been taken to the hospital, while her colleague suffered minor injuries, the Belgian news agency Belga reported.

On Twitter, the leader wrote: "I strongly condemn the attack in Charleroi."

Michel is set to cut short his vacation in the south of France to return to Belgium for a meeting on Sunday with the National Security Council.

Belgian Interior Minister Jan Jambon called the attack "despicable" on Twitter and offered his full support to the injured officers and their families and colleagues.

Belgium has been on high alert since radical Islamists killed 32 people in suicide attacks in Brussels in March. Many of the attackers involved in the Paris attacks in November, which claimed the lives of 130 people, came from Belgium.

The risk of terror attacks carried out in the name of "Islamic State" is best countered by monitoring radical groups and increasing intelligence cooperation, says Daniel Heinke of Bremen's Ministry of the Interior. (29.07.2016)

Belgian police has blocked off a part of downtown Brussels over a man wearing a thick coat with wires hanging out of it. The suspect turned out to be a radiation student doing research. (20.07.2016)