Security forces have "neutralized" an armed group which planned attacks on a military base and state institutions in Macedonia, officials have said. Several police officers have been killed in the battle. 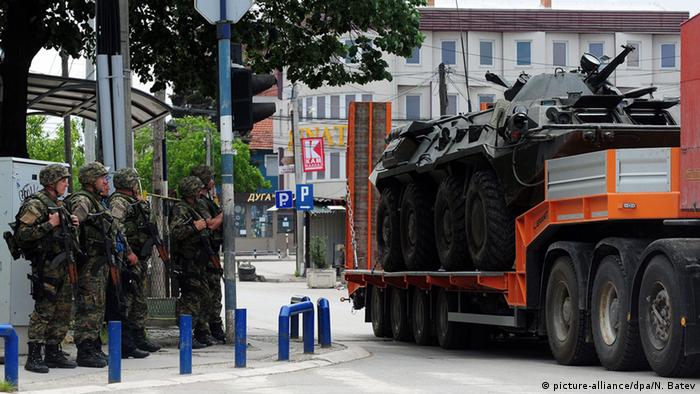 At least eight policemen and 14 members of the "armed group" composed of ethnic Albanians died during a day-long stand-off in Macedonian town of Kumanovo, Prime Minister Nikola Gruevski said Saturday.

"It was highly professional, heroic and patriotic action," Gruevski said, commenting on the police raid.

The group planned to attack sports events, shopping malls, as well state institutions, according to the prime minister.

"Unfortunately, eight police officers have lost their lives. However, their courage may have prevented killing of 8,000 people," Gruevski said.

Some 37 policemen were injured, and the death toll could continue to rise, authorities say. According to the government, several of the group are former rebel commanders from Kosovo, which fought a war against Serbia in 1999, followed by a smaller Albanian insurgency in Macedonia two years later.

Around 30 people have been arrested in Kumanovo, which is close to border with Serbia and Kosovo, and the town is now under police lockdown, the Interior Ministry said.

'The most dangerous' group

Earlier on Saturday, the prime minister stated that preliminary info suggests that elements of the group also participated in conflicts in Iraq and Syria.

"It means that those are persons with huge experience in guerilla and tactical warfare and they are considered the most dangerous terror group in the Balkans. The terrorists surrendered unconditionally after an decisive police action," the prime minister said.

NATO, which played the crucial role in diffusing the 2001 conflict between two ethnic groups, called for a "transparent investigation" of the incident.

"I urge everyone to exercise restraint and avoid any further escalation, in the interest of the country and the whole region," NATO Secretary General Jens Stoltenberg said in a statement.

Caught in the turmoil

Almost one third of the 2.1 million people living in Macedonia are ethnic Albanians, and the distrust between the groups runs deep, even with Albanians represented in the goverment.

However, Gruevski's government is currently faced with street protests and an escalating political crisis over corruption and illegal wiretapping, with opposition publishing a series of audio-recordings incriminating top officials. The anti-government movement, led by opposition politician Zoran Zaev, set a large rally for May 17.

Many of the Albanians in Kumanovo dispute the official version of Saturday's events.

"This is a stunt by Gruevski to cover up Zaev's revelations," said Elham Murad, an unemployed Albanian man who fled his home in the besieged suburb, vowing to attend the rally next week "dead or alive".