Saudi authorities have detained a 14-year-old boy for dancing the "Macarena" on the street in a viral video. Police said the teenager was questioned over "improper public behavior" and disturbing the traffic. 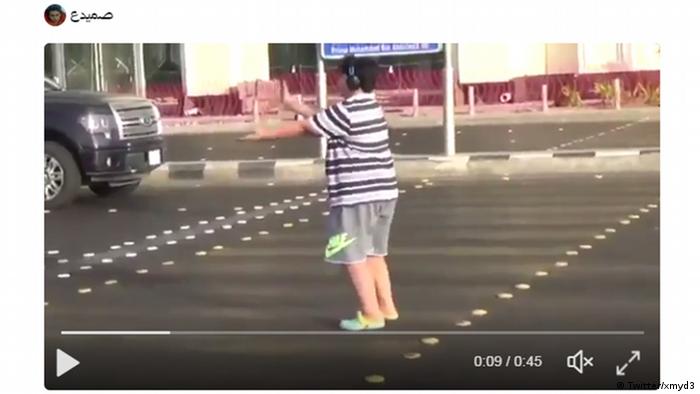 The video showing the boy dancing on the crosswalk to the 1990's hit 'Macarena' was widely shared across social media on Wednesday. In it, the youth is performing the characteristic dance in the Saudi port city of Jeddah, as another person films the apparently prepared stunt from the sidewalk.

Saudi police have released a woman from custody who was filmed wearing a miniskirt at an historic site. The case had caused uproar in the conservative Islamic nation. (19.07.2017)

The general relief over Donald Trump's speech to Muslim leaders in Saudi Arabia overlooks the fact that the US president has overturned Obama’s policy on Iran and is fueling tension in the region, says Matthias von Hein. (22.05.2017)

Hours later, Saudi police said that the boy had been detained and interrogated on suspicion of "improper public behavior." The authorities also accused the boy of disrupting the flow of traffic by dancing in front of a line of cars. Neither his name nor his nationality was disclosed, and it was not immediately clear whether or not he would be charged, according to the Reuters news agency.

Western style dancing is frowned upon in the ultraconservative Saudi kingdom.

Earlier this month, Saudi police arrested actor and singer Abdallah Al Shaharani for performing the "dab" dance move while on stage at a music festival.

Dabbing, or bending one arm and putting your face inside the crook of the elbow with the other arm outstretched, has been outlawed in Saudi Arabia. The Kingdom's National Committee for Drug Control said the move advocated drug abuse.

Al Shaharani was later released and forced to issue a public apology.

US President Donald Trump famously took part in a traditional sword dance during his visit to Saudi Arabia earlier this year.