Luxembourg has sworn in Xavier Bettel as its first openly gay prime minister, signaling social reforms. He replaces Jean-Claude Juncker, who was the EU's longest-serving head of government, with 19 years in power. 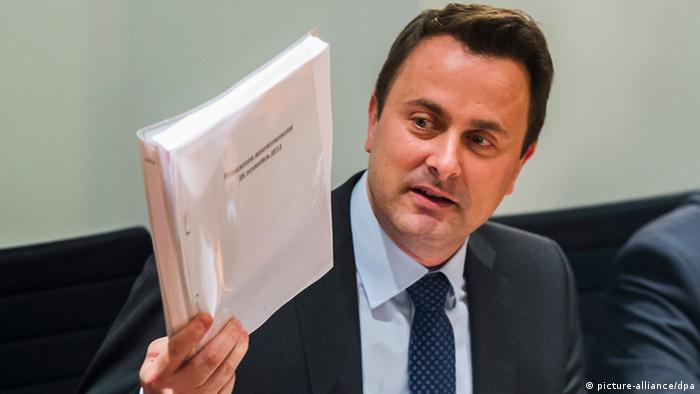 Luxembourg's long-serving premier Jean-Claude Junker moved into opposition on Wednesday. The reigns of government were handed to liberal Prime Minister Xavier Bettel, who emerged as winner of snap elections in October.

The Grand Duke of Luxembourg has intervened in a bid to bring a new government to power in the country. The move isolates long-serving Prime Minister Jean-Claude Juncker, who has been dogged by a surveillance scandal. (25.10.2013)

Juncker, aged 58, gained prominence throughout Europe as a founding father of the euro, and as the first president of the Eurogroup of eurozone finance ministers.

In the snap elections in October, the Liberal, Socialist and Green parties won a total of 32 seats.

Bettel heads a coalition of Liberals, Social Democrats and Greens who won a combined majority of 32 out of 60 seats in Luxembourg's election on October 20.

The victory was enough to form a majority coalition in the country's 60-seat, unicameral parliament, even though Juncker's Christian Democrats (CSV) remained the biggest party with 23 seats.

Juncker's CSV failed to find a coalition partner. The party's previous allies, the Social Democrats, withdrew their support in July over an intelligence service scandal.

Bettel's new government has pledged to introduce a raft of savings measures and wide-ranging tax reforms including a value added tax hike. They have also pledged to reform the secret service.

Bettel's cabinet is also expected to introduce same-sex marriage and other changes like replacing religious instruction in school with more general ethics classes.

The CSV, which Juncker will lead in opposition, had appointed every prime minister in Luxembourg since World War II, with the exception of a five-year stint in opposition from 1974 to 1979.

Luxembourg is one of the European Union's smallest but wealthiest States. The banking hub has a population of about 500,000 people.