Despite overtures to the EU and a recent row with Russia, Belarus isn't going to turn away from its big neighbor any time soon. Instead Minsk is merely continuing with a long-established strategy. 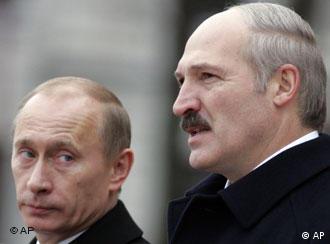 Relations between Lukashenko, right, and Putin are strained

For someone not necessarily known for his openess toward the West, Alexander Lukashenko made a somewhat unusual plea to his guest. "We honestly want to forge good ties, even if this may not be to somebody's liking," the Belarusian president told Benita Ferrero-Waldner, EU commissioner for external relations, during her visit to Minsk on Monday.

Lukashenko was referring of course to Russia, his country's long-time ally, which doesn't want Minsk to get too chummy with Europe. While Russia and Belarus had at one time even planned to form a union of both states, relations between Moscow and Minsk have turned sour recently.

In a move that angered Russia, Belarus has refused to recognize Georgia's breakaway provinces South Ossetia and Abkhazia as independent states. Russia, meanwhile, stopped all Belarusian dairy products at its border and froze a $500 million loan to the country. In addition Gazprom, Russia's energy giant, is demanding hundreds of millions of dollars in back payments from Belarus.

While the dairy dispute has been settled, the other issues remain unresolved. So has Lukashenko amid increasing Russian pressure on his regime made a strategic decision to turn away from Moscow and focus on Brussels instead? 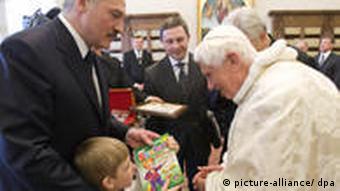 No, says Fraser Cameron, director of the EU-Russia Center. "Russia has too many pressure points. Russia is the biggest investor in Belarus and probably knows the country as good as anyone."

What's more, Moscow's military-industrial complex plays a large role in Belarus, a country where these types of informal relations are very important.

Belarus is clearly trying to play Russia and the EU off of each other, says Amanda Akçakoca, a policy analyst with the European Policy Center in Brussels. Andrew Wilson from the European Council of Foreign Relations adds that Lukashenko is the most experienced of all the leaders of the former Soviet republics at pitting Russia against Europe for his own political purposes.

But Lukashenko, who was once called Europe's last dictator by former US secretary of state Condoleezza Rice, couldn't just break away from Russia even he wanted. His country is simply too dependent on Russia. Not only is it Belarus' main trading partner, but without the cheap energy supplies from across the border, Minsk would have gone bankrupt years ago.

So what is the current spat between Russia and Belarus all about? Mainly three things, say the experts: personal relations, economics and politics. "It's a well known fact that Russian Prime Minister Vladimir Putin can't stand Lukaschenko," says Akçakoca.

Putin has believed for a long time that Moscow should get more value from the money it pumps into Minsk, argues Wilson: "Russia feels that Belarus should be one of its most loyal allies, but instead finds Belarus often being one of its most annoying allies."

Therefore, Russia, after helping to keep Lukashenko in office in 2006, has stepped up the pressure on the president in an effort to benefit more from the close relationship between both states. 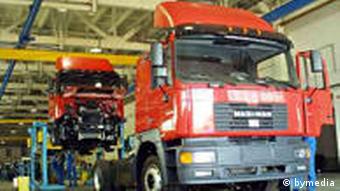 Belarus is economically dependent on its biggest trading partner Russia

But so far Russia hasn't made much progress, the experts point out. Instead Belarus, which has been badly hit by the financial crisis, is the only country that has managed to receive money from both the International Monetary Fund and Russia. Lukashenko's recent ouverture to the EU is similar in nature.

"Lukashenko wants to open up to Europe economically, but not politically," says Wilson. His goal is to see what he can get from the EU and then go to Russia and try for something better, argues Akçakoca.

There isn't much Europe can do to bring about reforms in Belarus. The decision by the EU to lift long-time sanctions against Lukashenko and his regime was right, says Akçakoca. "The sanctions didn't work at all." Now the EU is taking a step-by-step approach to Belarus as part of the Eastern Partnership program, offering technical and financial assistance in exchange for concrete political reforms.

Lukashenko has released some opposition leaders, but other than that there hasn't been much change on the ground in Belarus, says Akçakoca, who thinks that the EU generally is on the right track now with its Belarus policy. "It's better than isolation," she adds, "but for a real change there has to be a new leadership in Belarus."

The European Union has just launched a new Eastern Partnership plan with six former Soviet states. However, Russia has already voiced its concern over the plan, which it sees as the EU encroaching on its territory. (08.05.2009)

The European Union has invited the man who George W. Bush referred to as Europe's last dictator to a Prague summit at which EU leaders plan to launch an initiative called Eastern Partnership. (17.04.2009)