As a week-long strike by Lufthansa's cabin crew members draws to a close, their union was already threatening fresh walkouts if the German airline didn't budge in an ongoing dispute over retirement benefits and pensions. 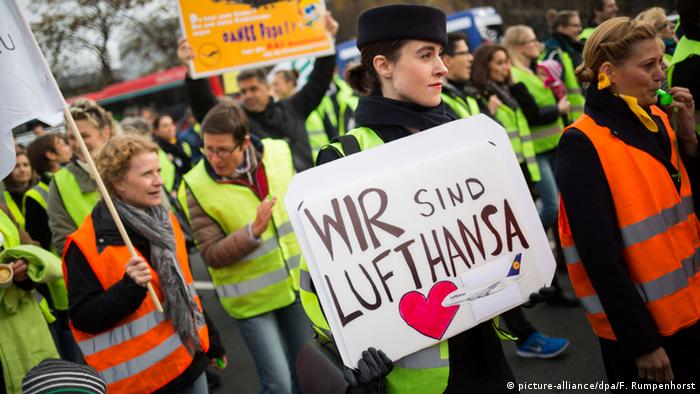 The head of the UFO union, which represents Lufthansa's 19,000 stewardesses and stewards, told a crowd of cheering protestors at the Frankfurt airport on Friday that further industrial action was possible if the carrier doesn't back off its plan to slash costs.

"This strike will end tonight, but if management doesn't change, then strikes will be possible again at any time," said Nicoley Baublies, referring to walkouts in the last seven days that have kept nearly all of the airline's planes on the ground.

Lufthansa said the strikes had incurred losses of some 10 million euros ($10.7 million) a day, after around 4,700 flights were cancelled and more than half a million passengers turned away or rebooked on other airlines.

"What we've seen is that no matter what you do, you just can't reach a resolution with this management," Baublies told the crowd of about 200 Lufthansa employees, who responded with cheers, whistles and chants of "We are Lufthansa."

For its part, the airline's management has said it cannot afford to offer new employees the same retirement benefits and pension schemes as current staff. Stiff competition from budget airlines and Gulf carriers was forcing Lufthansa to consolidate.

Negotiations between the cabin crew union, UFO, along with the pilots' union Cockpit and Verdi, which represents Lufthansa's non-flying personnel, have dragged on for years and grown increasingly acrimonious as strikes have become more frequent. Lufthansa pilots have walked off the job a dozen times in the last year and a half.

In Frankfurt on Friday, the airline's chief financial officer, Simone Menne, also addressed protestors, saying Lufthansa was ready for compromise although it did not have much room to maneuver.

"What we have offered is what we can afford," she said, adding that the most recent strike would not have a significant effect on Lufthansa's full-year profit forecast.

A German court has struck down a Lufthansa injunction aimed at ending a walkout by the airline's cabin crew, setting the stage for a nasty battle that could see thousands more flights being cancelled in the days ahead. (11.11.2015)