A German court has struck down a Lufthansa injunction aimed at ending a walkout by the airline's cabin crew, setting the stage for a nasty battle that could see thousands more flights being cancelled in the days ahead. 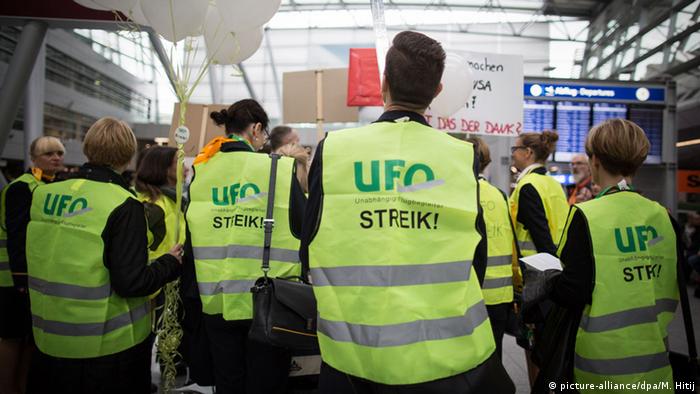 A labor court in Dusseldorf, Germany, ruled on Wednesday that cabin crew union UFO must be allowed to continue its industrial action at the German carrier at least until Friday. The court followed a similar ruling by the labor court in Darmstadt earlier in the day, which has jurisdiction for Frankfurt and Munich airports.

Lufthansa had sought to challenge the legality of the industrial action through court injunctions claiming the union's reasons for striking were "too vague" and unjustified under German labor law. The Dusseldorf court, however, dismissed the claim saying UFO's aims were "sufficiently clear" and "not exaggerated."

The UFO union welcomed the ruling on its website, calling for the strike to continue from 0300 GMT on Wednesday until 2300 GMT on Friday across all flights at Frankfurt, Munich and Dusseldorf airports.

Lufthansa and UFO have been locked in a battle for nearly two years, in which management has sought to change early retirement provisions for their cabin crews. While UFO wants them to remain unchanged, Lufthansa argues that the system is too expensive in the face of cut-throat competition from low-cost operators such as Ryanair and EasyJet.

On Monday, the airline presented a new offer to the union, with improved bonuses and retirement provisions, but UFO called it unacceptable.

In a statement issued on Wednesday, the airline's chief executive (CEO) Carsten Spohr said Lufthansa could not endanger its future by ceding to the union's demands. He added that the dispute would run for "as long as necessary," even though he admitted that "each day of strike is one too many."

Spohr also called on UFO to allow an independent arbiter to find a solution in the dispute - an offer which union boss Nicoley Baublies ruled out for the duration of the strike.

Earlier this year, the German carrier was already hit by a dispute with its pilots over early retirement payments. The pilots were also concerned about management plans to expand the airline's low-cost activities and staged a series of walkouts that cost Lufthansa 350 million euros ($375 million). The pilots' strike was finally stopped by a German court, which argued the union demands were not clearly linked to wage issues and working conditions.

A labor court has rejected Lufthansa's request for a restraining order against the UFO flight attendant union. The court ruling allows the strike to continue and 930 flights have been canceled for Wednesday. (11.11.2015)

A labor court in the German state of Hesse has issued a temporary injunction against the pilots' union Vereinigung Cockpit, ordering Lufthansa pilots to halt their strike. The walkout is the 13th amid a pay dispute. (09.09.2015)