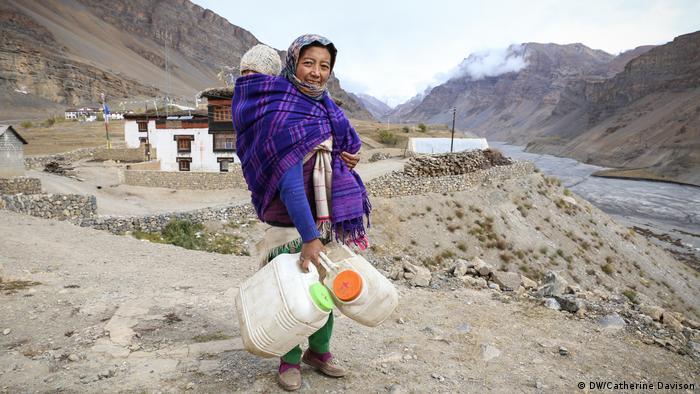 Tashi Yudon peeks out from behind a net curtain at the rooftops below and lets out a sigh, her breath frosting on the windowpane in front of her.

Some 700 kilometers away in the capital city Delhi, temperatures have yet to dip below 25 degrees Celsius, but in Spiti there is already an atmosphere of impatient expectation as winter settles over the valley.

"The snow will come this month," the 27-year-old teacher predicts, wrapping her scarf a little tighter around herself. "I hope," she adds.

Nestled into the Himalayan mountainside at just over 4,000 meters above sea level, her hometown of Chichim is one of the highest villages in Spiti valley. Snow here signals more than just the coming of a new season; its presence is essential for the survival of the village. 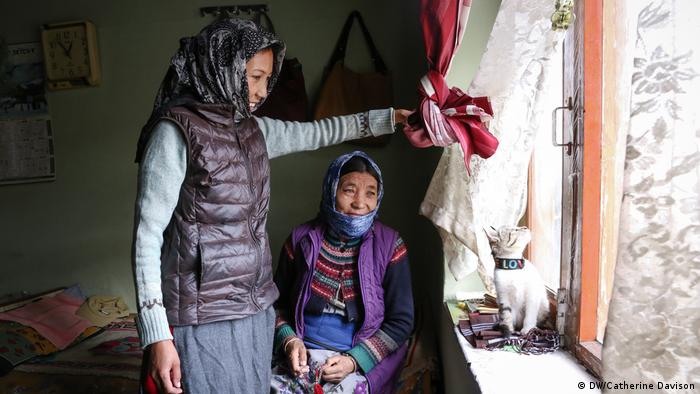 "Our water source comes from the mountains," Yudon explains, pointing to a snow-covered peak towering in the background. A remote rainshadow region sheltered from the monsoon by the surrounding Himalayas, the valley receives almost no rain. Villages like Chichim are instead entirely dependent on the ice melt which trickles down from the glaciers each summer — a supply which is replenished in winter when it snows.

Recent decades however have seen a drastic decline in snowfall, with glaciers across the Himalayas losing a total of 8 billion tons of ice every year. "The ice on the mountain is getting smaller and summers are getting longer," Yudon frowns, as her mother nods in agreement. "There is less water." 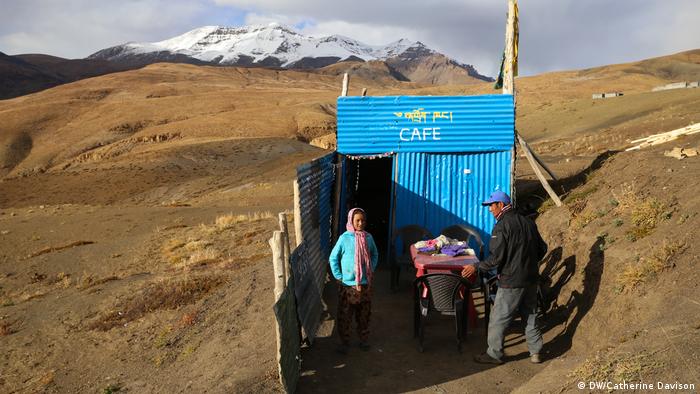 As agriculture is becoming less sustainable, tourism is taking over as an alternative income

Further along the valley in Pangmo, Tashi Tandup, who has lived in the village all of his life, is also worried. "Every year the mountains snow less," the 67-year-old says. "There have always been water problems here, but there used to be so much snow. We would take snow from the hills and then drink the water." Last year, after a winter with no snowfall, the village ran out of water completely.

Reduced snowfall and receding glaciers are a phenomenon impacting the whole of the Hindu Kush Himalayan region. A recent report from the Intergovernmental Panel on Climate Change (IPCC) projects that in lower altitude mountainous regions such as Spiti, "glaciers will lose more than 80% of their current mass by 2100."

Read more:  Kenya and Tanzania: Living on the Mara River, together

The report corroborates the findings of an earlier study, which predicted that even if global warming is limited to 1.5 degrees Celsius above pre-industrial levels as set out in the Paris Agreement, over one-third of glacial ice in the region will have disappeared by the end of the century, with "the most negative scenarios in the eastern Himalaya point[ing] towards a near-total loss of glaciers." 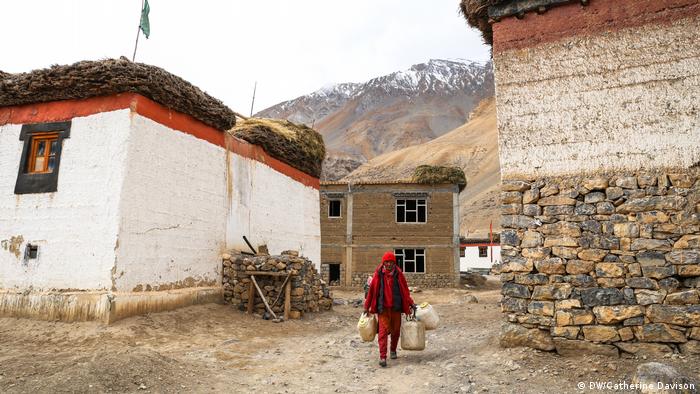 Yangchen Dolma, 57, walks to collect water pumped from the Spiti River from the village tap in Pangmo Nunnery 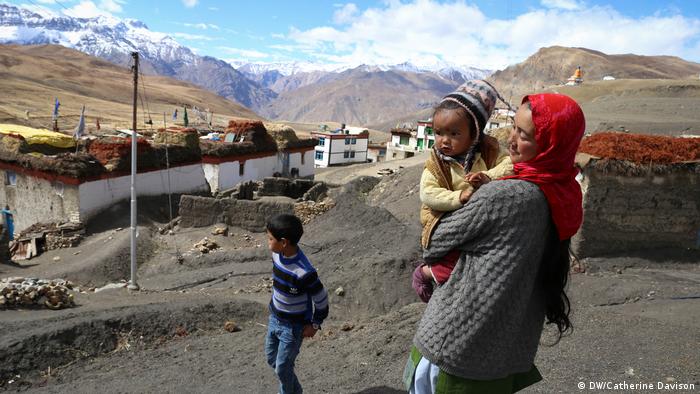 Butith Dolma, 27, with her niece and nephew, worries her life will become unsustainable in the village

Rapidly-receding glaciers would have a direct impact on 10 of the world's major river systems which originate in the region, increasing the risk of flooding in summers and eventually causing drought as the ice disappears. This would affect 1.9 billion people who live downstream as well as 3 billion people who rely on crops grown in the river basins. The IPCC report also predicts that as the ice melts, it will release legacy pollutants from decades of black carbon deposited on the mountain tops, contaminating downstream water supplies.

In lower altitude regions of the Himalayas such as Spiti, where glaciers were small to start with, their recession is already having an impact on the villages that depend on them.

Butith Dolma moved to the village of Demul eight years ago when she got married. "Out of the eight years, two have been droughts," she says. "We completely ran out of water. None of the crops grew."

The 27-year-old mother-of-two worries that if the water situation keeps getting worse, her life in Demul may become unsustainable. "We can survive this happening one year, but if it happens regularly we will have to move," she says. 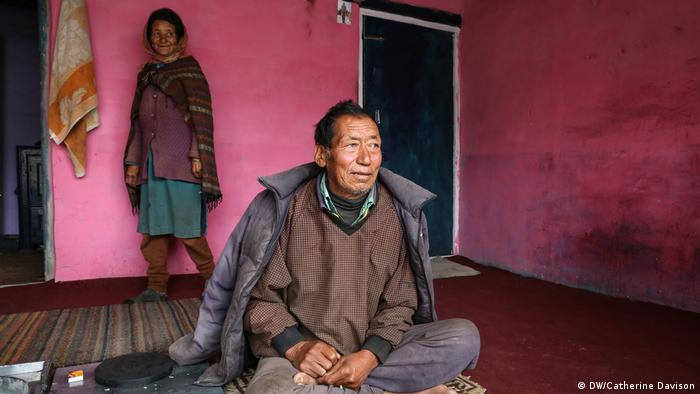 In nearby Ladakh, water shortages have already caused a few entire villages to migrate. The inhabitants ofKumik in Zanskar were forced to relocate in 2014 after the river which they depended on for water dried up.

"Agriculture is the main source of income here. And it's very water-dependent," explains Ishita Khanna, the co-founder of Spiti-based NGO Ecosphere. "If the situation continues then yes, there would be villages which would migrate out."

Ecosphere is working to mitigate the impact of climate change by utilizing traditional methods of water conservation combined with modern technology, such as solar pumps which can pump up river water when mountain sources dry up.

Read more:  How residents of one of Nairobi's poorest districts are cleaning up a major local river

In Demul, they have experimented with check dams and artificial glaciers, designed to freeze water before it can flow off the land. "We can't control how much snow falls," says Ishita. "But we can try to trap as much of the snow or water from running off as possible." 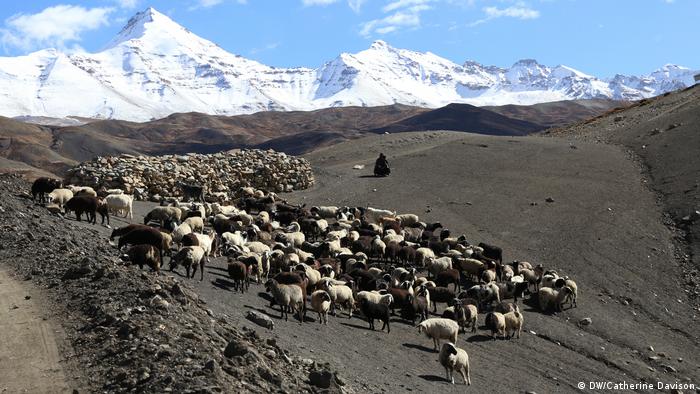 Whilst pumping up river water and preventing run-off provide temporary relief however, Ishita acknowledges that it might not be a sustainable solution. Eventually, she says, the water supply will deplete entirely if there's not enough snowfall.

It is a fact which constantly plays on the mind of Tandup, sat in his home in Pangmo village, where Ecosphere has installed a solar-powered pump.

"If we depend on the Spiti River only, we can build a pump and it's a solution," he says. "But if there is less and less snowfall on Kunzum top [the nearby mountain], then the rivers will stop flowing, and then we will have a big problem."

The old man says that he knows of two or three young families who have already migrated out of the valley and "moved to Manali because of the water problem." As for most families in Spiti however, financial constraints tying him to the land means that he would never consider the move himself. "All of our lands and agriculture are here," he explains. "We don't have any land in other places."

Yudon, tearing her gaze regretfully away from the snowless scene outside her window, agrees. "This is our land, our home," she says, gesturing at the scattering of square houses below. "We will stay here in Chichim. Even without water."

"There is no other solution," she concludes simply.

In the mountains of Armenia, a previously bucolic spa town is home to a goldmine locals say threatens the country's biggest source of freshwater, and with it, an entire ecosystem. (11.09.2019)