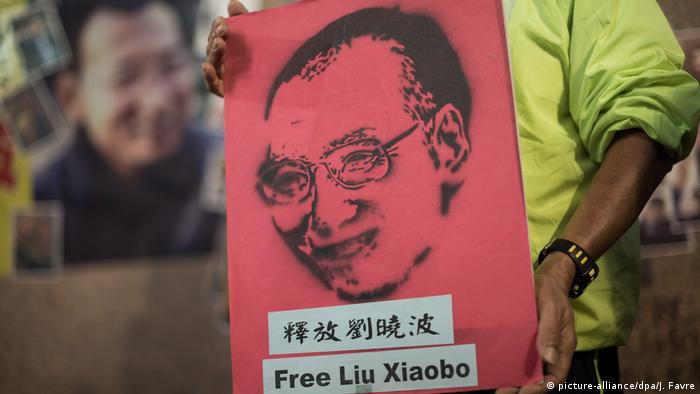 The Nobel laureate Liu Xiaobo has fallen into critical condition, the hospital treating him reported on Monday. Officials recently moved the writer and activist from prison to a hospital in the city of Shenyang to be treated for late-stage liver cancer.

The news comes a day after doctors from the United States and Germany who visited Liu over the weekend said medical officials could safely move him abroad for treatment - but that would have to happen soon. In a joint statement, the doctors said "additional options" might exist to treat Liu, including radiotherapy.

On Monday, however, the hospital currently holding Liu issued a short statement which said that Liu had also begun experiencing kidney problems and that radiotherapy was inappropriate given his condition. The hospital reported that officials had informed his family.

German Chancellor Angela Merkel's spokesman Steffen Seibert told reporters on Monday that Merkel was concerned for Liu. Asked whether she had discussed the matter with Chinese President Xi Jinping, who was in Berlin and Hamburg last week for the G20 summit, Seibert declined to comment on confidential conversations.

However, he told reporters in Berlin: "I can assure you that this tragic case of Liu Xiaobo is a great concern of the chancellor, and that she would like a signal of humanity for Liu Xiabao and his family."

Questions have arisen over the possibility of Liu's getting treatment abroad and - if he were to chose to go and doctors deemed him fit for travel - whether authorities would let him leave. China's government jailed Liu for 11 years in 2009 for "inciting subversion of state power" after he helped write the Charter 08 petition, which called for sweeping political reforms. In 2010, he won the Nobel Peace Prize for his work campaigning for human rights in China.

Rights groups and other governments have called for China to allow Liu to travel with his wife, Xia, for treatment. Asked on Monday at a daily news briefing whether the country would allow Liu to go abroad for treatment, Chinese Foreign Ministry spokesman Geng Shuang said: "China hopes relevant countries will respect China's sovereignty and will not use individual cases to interfere with China's internal affairs."

"China is a country of rule of law, and everybody is equal in front of the law," Geng said.

The government has kept tight control over information about Liu's case and imposed security at the hospital. Police in plainclothes blocked a Reuters journalist from taking video of the hospital's entrance, the news agency reported.

Imprisoned Chinese Nobel Peace laureate Liu Xiaobo has been transferred to a hospital after being diagnosed with cancer. DW spoke with his lawyer Mo Shaoping about Liu's condition and whether his family could visit him. (26.06.2017)

After serving eight years in prison, Chinese authorities have freed the Nobel Prize-winning Liu Xiaobo. The human rights defender and pro-democracy activist was jailed in 2008 for "inciting subversion of state power." (26.06.2017)