While Germany is currently mulling over ways to bring economic growth to its formerly communist states, eastern German bubbly maker Rotkäppchen announced Tuesday that 2003 was yet another record year for the company. 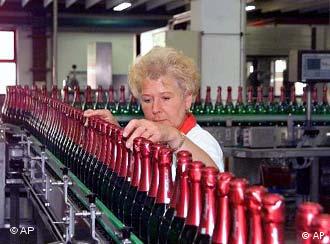 Rotkäppchen's getting more popular in western Germany as well.

But such jokes died down by 2001 at the latest, when the eastern German sparkling wine maker stunned Westerners by doing what few others had managed: It took over western German competitor Mumm, followed by yet another East-West acquisition of Geldermann sparkling wines in 2003.

It's been pretty much a fairy tale ever since for Rotkäppchen, the German word for "Little Red Riding Hood," even though the champagne gets his name from the red cap on its bottles. 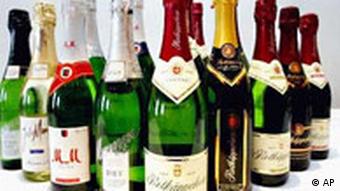 "Red cap" and its bubbly sisters.

"We're modern, self-confident and successful," Rotkäppchen CEO Gunter Heise said. He added that the company, which employs 383 at its headquarters in Freyburg in Saxony-Anhalt and three west German locations, didn't see itself as an "East German" business any more.

Acquisition of the western German brands has also helped the company to promote its Rotkäppchen brand nationwide as company officials were able use already existing distribution channels.

Company executives, who took over in a management-buyout in 1993, said they were confident they would increase sales yet again this year. "We want to keep growing and are aiming for a sales increase of 2 percent this year," Heise said.

While other champagne makers are eyeing markets in Eastern European countries and beyond for expansion, Rotkäppchen seems content to keep growing at home, according to Frankfurter Allgemeine Zeitung.

Prost! With a Special Bottle of Bubbly

The Germans will be bidding goodbye to the year with their own red-capped bottle of bubbly, “Rotkäppchen”. The sparkling wine company is an unlikely success story from Eastern Germany. (Dec. 31, 2001)

Germany's attempt to rebuild its once communist East has been an unmitigated disaster and the massive financial transfers from the West endanger the entire nation's economy, according to a government-commissioned report. (April 6, 2004)