A giant puppet of a young refugee girl is part of "The Walk," an art initiative that will travel 8,000 kilometers in support of refugees. It will also stop in Germany. 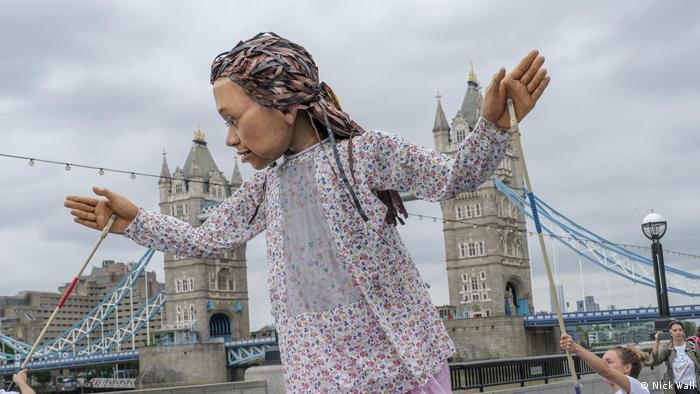 Amal at an earlier press conference in London: She will return to the British capital at the end of her three-month trip

Little Amal has a long journey ahead of her. She is set to travel 8,000 kilometers (around 5,000 miles) from the Turkish-Syrian border to Manchester in the United Kingdom. She is looking for her mother, who set out in search of some food and never returned.

Little Amal, however, is a no ordinary girl: She is a 3.5-meter-tall (nearly 12-foot-tall) puppet, and the central and sole character of a theater project called "The Walk," which kicks off on July 27, 2021, in Gaziantep, Turkey, near the Syrian border. Over the next two months, Amal — Arabic for "hope" — will travel through eight European countries, including Germany.

Through this project, the British Good Chance theater company aims to draw attention to all displaced children, many separated from their families, whose plight has been overshadowed by the COVID pandemic.

"It's precisely because the world is now looking at other issues that it's so important to bring the refugee crisis back into focus," stresses Amir Nizar Zuabi, the initiative's artistic director. He says the goal is to highlight "the potential of refugees" rather than just their "dire circumstances."

On its website, the initiative calls the art action "one of the most innovative and adventurous public art works ever undertaken," with the puppeteers including former refugees.

Amal will arrive in Germany after traveling through Izmir, Rome, Marseille, Geneva and Strasbourg. From October 1-3, 2021, she will stay in Stuttgart, Cologne and Recklinghausen.

All along "The Walk," communities will welcome Little Amal with cultural programs staged by local artists. 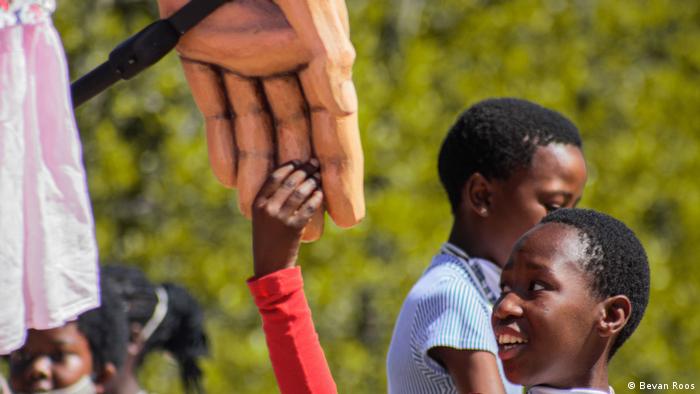 In Stuttgart for example, one of the German strongholds of large-scale puppetry, the puppeteers of Dundu will represent her dreams with their own 5-meter-tall puppets, Dundu's Fabian Seewald told DW.

Seewald emphasizes the ambitiousness of "The Walk." It is unique, he says, to put on such a performance under pandemic conditions across eight national borders.

In Cologne, the ArtAsyl association will organize a meeting between Amal and older people who have also experienced war, and in Recklinghausen, a "Welcome Street" will be paved for Amal by local residents and the Ruhrfestspiele Recklinghausen.

She will then continue with her travels to Antwerp, Brussels, Paris, London and finally Manchester in the UK.

The larger-than-life puppet was built by the renowned South African Handspring Puppet Company. The company's founders, Basil Jones and Adrian Kohler even came out of retirement to create it. "The refugee story is the big issue of our time," says Kohler on "The Walk" website.

"At a time when theaters are still struggling to reopen their doors, a public art event like this can bring people back together."

It takes a total of four puppeteers to animate Little Amal: one for each arm, one for her back, and one actor inside her body, walking on stilts. The latter also operates "the harp," a complex system of strings that control the puppet's facial expressions. 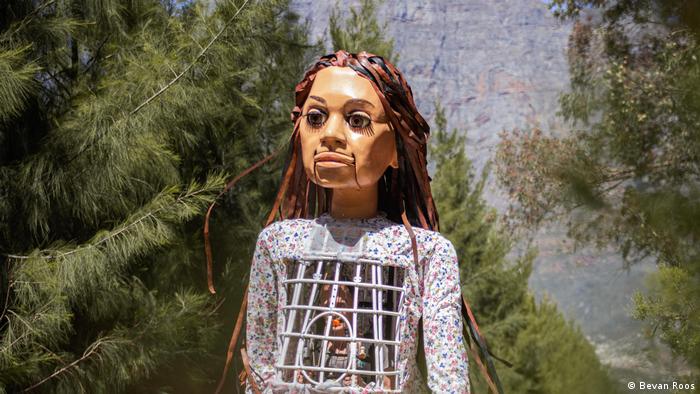 The Good Chance theater company was founded in 2015 in the refugee camp in Calais, which was then known as "The Jungle." Their first play, also called "The Jungle," was met with critical acclaim in London's most important theaters and in the West End.

Time and again, the artists involved emphasize that the goal is to help people connect. "Since our inception, we have emphasized the great importance of art in humanitarian crises," writes Naomi Webb, Good Chance's executive director on its website. "Art has the disarming ability to bring people together and tell human stories."

Seewald agrees. "With Dundu, for example, we also performed in Tahrir Square in Cairo in 2013. There, with our large puppets, we created a situation of shared childlike wonder that momentarily bridged the differences among people and the borders in their minds and made it possible to experience what they have in common."

The special thing about large puppets like Little Amal is that they require several animators. "Many forces have to work together to make something happen."

"The greatest 'aha' moment occurs when you give people the opportunity to lead the puppet themselves. Then they create something together. That's the magic of puppetry: bringing things to life together," says Seewald.