Chinese Premier Li Keqiang has marked his first official trip to Britain with the two nations signing key trade deals worth billions. The visit is also aimed at healing diplomatic relations that have cooled over Tibet. 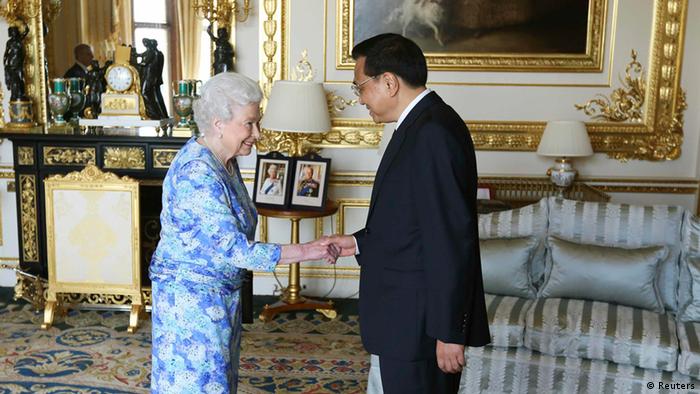 Li is midway through a three-day visit to Britain, with the Chinese premier meeting monarch Queen Elizabeth II at Windor Castle on Tuesday, before heading to London for a formal inspection of British soldiers, followed by talks with British Prime Minister David Cameron.

Li's meeting with the Queen is seen as a significant political gesture, as such an honor is typically reserved only for heads of state.

The pomp and ceremony displayed to Li is indicative of the importance Britain places on his visit, with Cameron saying as much when he announced the signing of trade deals worth 14 billion pounds (17.53 billion euros, $23.7 billion) between the two countries.

Cameron said the increasing dominance of China was "one of the defining events of our century," with Britain hoping to strengthen business and cultural ties.

Britain was a "strong friend of China and supporter of China's rise," said Cameron.

For his part, Li, whose trip to Britain is his first official visit since taking office in 2013, said the two countries had many shared interests.

"China is ready to work with the UK to foster a partnership for growth and inclusive development to ensure that this relationship will grow faster and in a healthier way," Li said.

The London Stock Exchange also announced it had signed agreements with two of China's biggest banks to develop offshore trading in the yuan, the Chinese currency.

London is seeking to thwart challenges to its position as the leading yuan center in Europe, and its space at the top of the $5-trillion-a-day global foreign exchange market.

Other deals include one to make China's second-largest lender, China Construction Bank (CCB), the first clearing service for offshore trading of the yuan in London.

While business, not politics, have dominated Li's visit, the two nations are keen to end a diplomatic rift that arose when Cameron met the Dalai Lama in 2012. China says the exiled Tibetan spiritual leader is a separatist.

Nonetheless, Beijing warned London ahead of Li's visit not to lecture it on the subject if it wanted good economic ties. Cameron told reporters on Tuesday their talks focused on terrorism, Iraq and Ukraine, but he did not raise China's human rights record.

Around 100 rights activists campaigning for independence for Tibet, which China has ruled since 1950, staged a protest near Downing Street. They were joined by a rival pro-China group; both were held at arms' length by a heavy police presence.

The last Chinese premier to visit Britain was Li's predecessor, Wen Jiabao, in 2011.