Lionel Messi's second half penalty miss cost Argentina the chance to open their Group D campaign with a win. But the emotions couldn't have been more different for Iceland, who grabbed a point on their World Cup debut. 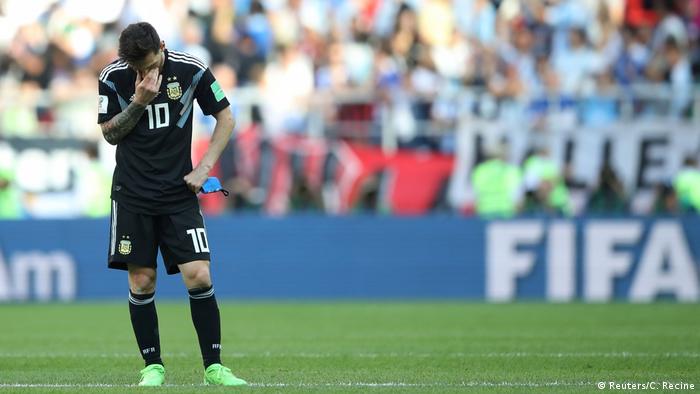 If one of world football's playing duopoly dominated Friday night, the other stole the spotlight on Saturday afternoon, but for all the wrong reasons.

Despite the backing of their distinctive and decibel-rich fans, Iceland looked in trouble early on, Nicolas Tagliafico going close for Argentina and Ragnar Sigurdsson almost scoring in his own net.

The Scandinavians then began to get a foothold in the game before being hit with a sucker punch. Marcos Rojo’s ambitious shot flew to the feet of Sergio Aguero and the Manchester City striker turned in a flash and unleashed a rising thunderbolt which flew past Hannes Halldorsson, the Iceland goalkeeper who works as a filmmaker.

If it all looked to be following the familiar script, no one had told Alfred Finnbogason. Willy Caballero could only push Gylfi Sigurdsson’s drive into the path of the Augsburg man and he rammed home Iceland’s first World Cup goal just 23 minutes into their debut on the global stage.

Then, enter the superstar. Lionel Messi had shown flashes of his usual inspiration throughout and was handed the chance to restore Argentina’s lead just after the hour mark. But his spot kick was desperately poor and Halldorsson comfortably kept it out.

Argentina’s skipper should have had another chance to address his patchy recent record from the spot 15 minutes from time when substitute Christian Pavon was clipped in the box by Birki Mar Saevarsson but the referee saw nothing wrong and decided not to call on VAR to check his decision.

The 2014 runners-up had several other opportunities to open their campaign with three points. Messi was inches away from redemption with a trademark left-foot curler and had a goal-bound shot blocked by a teammate.

But ultimately neither Argentina nor their talisman did enough to beat an Iceland side who enjoyed just 22 percent of possession but had more than enough reserves of resolve, discipline and skill. They could surprise us all again.

FULL TIME: What a display from Iceland. Lionel Messi's missed penalty will dominate the discussion but incredible stuff from the first timers. The match report will be along here any minute.

90+4 - The ball breaks to Otamendi and he....produces a weird chip that floats in to the keeper's arms. Iceland have defended heroically in the late stages. But Argentina have a free kick. Messi over it....

90+2' - Messi is so keen to make up for the penalty miss but it's just not happening. He twists and turns to find half a yard but hammers over with his right.

90' - There will be five minutes of added time. Can Iceland cling on?

89' - Finnbogason is down with cramp and is removed in favor of Sigurdarson. The Augsburg man will go down in the history as the first Icelander to score at the World Cup.

88' - It's wave after wave of attack from Argentina now, as Halldorsson is forced in to two smart stops in succession.

84' - Messi really wants this now! After a neat exchange with Aguero, he beats a man and smashes an effort towards goal. It only makes it as far as Banega, however, who inadvertently blocks his teammate's shot. Just after, Meza is substitued for Gonzalo Higuain.

81' - So close from Messi! Argetina's captain collects the ball in space and unleashes a curling drive from 25-yards. It's a whisker away from the post. Huge let off for Iceland.

77' - Argentina should have had another penalty there. Pavon is blatently tripped in the box by Bikir Saevarsson. Huge call by the referee and it was surprising that he didn't opt for a replay. Had he done so, I'm sure he'd have changed his mind and awarded it.

74' - Substitutions for both sides. For Argentina, it's Christian Pavon on for Di Maria. Iceland swap Aron Gunnarsson for Ari Skulason.

71' - Messi drives through the Iceland midfield, skipping past opponents as he goes. It looks as if he's going to cut in and bend a shot to the far post but is halted in his tracks by Ragnar Sigurdsson. The ball falls to Banega but his shot barely troubles the keeper. Iceland are holding on admirably.

63' - Penalty save! Halldorsson denies Lionel Messi from 12-yards and, in truth, that was a poor penalty. Aguero won the kick after being tripped by Hörður Magnusson. It looked very harsh.

54' - First substitution of the match. Argentina's Lucas Biglia makes way for Ever Banega

50' - An Iceland penalty claim is waved away by the referee. Nicolas Otamendi did handball in the box but that would have been harsh. He didn't even have his eyes open.

46' - The second half gets underway in Moscow.

HALF TIME - Great opening 45 in Moscow. End to end stuff despite Argentina boasting vastly superior ball posession. Will we see a goal from Messi today?

45' - Iceland so close on the stroke of half time! A free kick is lofted to Bjarnson at the back post. The midfielder's cross is blocked but it drops to Gyilfi Sigurdsson. The playmaker drops a shoulder before wiggling through the tightest of gaps and getting a good shot away. Cabellero parries and danger is averted. Lovely move!

40' - A couple of penalty shouts for Argentina but they're waved away by the referee. Quite right, too. Lucas Biglia is chopped down by Ragnar Sigurdsson in the area but the big defender took the ball first. No complaints there.

29' - Iceland are showing no signs of stage fright whatosoever on the biggest stage of all. Every time Argentina concede possesion, Iceland break with speed and power. Another positive showing for the nation that keep surprising us at every opportunity. A long way to go yet, though. Can they keep it up?

23' - GOAL! Instant reply from Iceland. Gyilfi Sigurdsson finds space on the left and whips a low ball down the corridor of uncertainty. Caballero paws it away, but only so far as Alfred Finnbogason. The Augsburg forward gratefully slots home to register his nation's first ever World Cup goal.

19' - GOAL! Argentina take an early lead through Sergio Aguero and it's a belter. Marcos Rojo strides out of defence with the ball, he's unchallenged so chooses to drive a low shot towards Iceland's goal. Aguero traps it on the penalty spot, spins away from his marker and lashes a powerful drive into the top corner. Lovely finish from the Manchester City striker.

17' - Vintage Messi. The little genius shimmies in from the left, dodges a tackle and unleashes a fierce drive towards the top corner of Hannes Halldorsson's net. The keeper is equal to it, however, and it's punched to safety.

10'- So close from Iceland! A bizarre mix-up between Javier Mascherano and Willy Caballero leads to much confusion and Iceland pounce. The ball is worked to Birkir Bjarnson, who slices wide when he really should have worked the keeper.

8' - Another free kick for Argentina, another close shave for Iceland. Messi whips it in this time and left back Nicolas Tagliafico meets it. The full back steers it inches wide.

5' - Argentina almost take the lead early on via an own goal. Di Maria lofts free kick to the back post and it's almost headed in by Ragnar Sigurdsson.

1' - We're off! Alfred Finnbogason gets things underway in Moscow. Iceland in white and Argentina in a rather dashing dark blue number.

Here we go again. Teeny-tiny Iceland, England's unlikely conquerors at Euro 2016, line-up for their first ever World Cup game and what a baptism of fire this is. They face Argentina, who have enough attacking talent to leave Paulo Dybala and Gonzalo Higuain on the bench. They reached the final of this competition four years ago and are hell-bent on going one better this time round.

Lionel Messi bares his teeth in a deep-lying forward role behind the tenacious Sergio Aguero in attack, with Angel di Maria and Maximilliano Meza providing service from the wings. Iceland will fancy their chances, however, with Gyilfi Sigurdsson fit again to pick pockets behind a creaky Argie defense. It's not quite David vs. Goliath, but don't let that spoil the narrative.