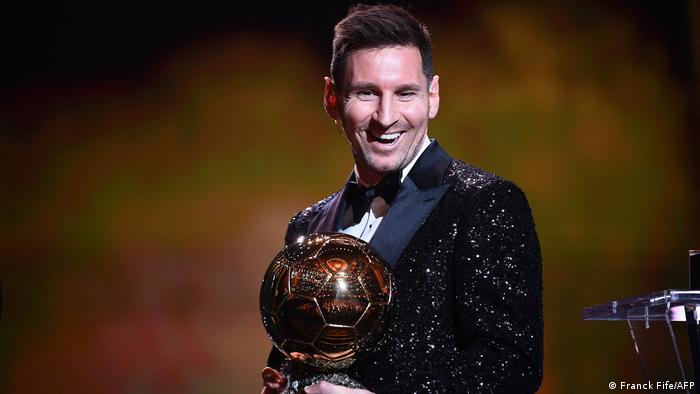 Messi beat out Bayern Munich's Robert Lewandowski to win this year's honor. Chelsea's Jorginho, among the favorites to win the award after winning the Champions League and Euro 2020, finished third.

Earlier this year, Messi won his first international trophy when he lifted the Copa America with Argentina. He was also the joint top goalscorer of the Brazil tournament with four goals.

He also made headlines this year when he left his longtime club Barcelona to join Paris Saint-Germain. So far in 2021, he has scored 41 goals and recorded 17 assists for club and country.

"It's incredible to be here again. Two years ago I thought it was the last time. Winning the Copa America was key," Messi said at Paris's Theatre du Chatelet. 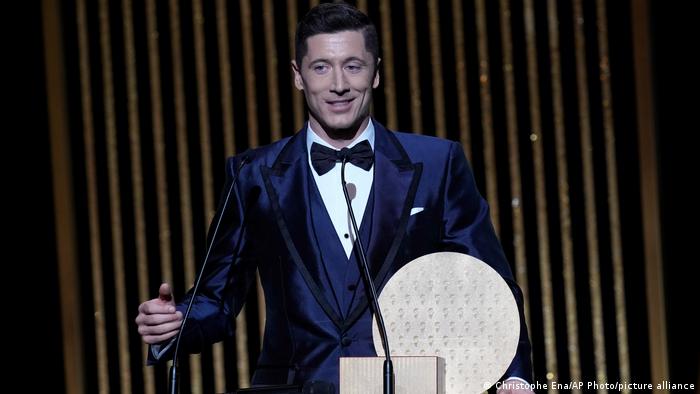 Robert Lewandowski won the first-ever Striker of the Year award

Lewandowski named Striker of the Year

Although he missed out on the top prize, Bayern's superstar striker didn't leave Paris empty-handed. The Pole won the Striker of the Year award — a new prize at the Ballon d'Or ceremony.

The honor is given to the player who scores the most goals in a calendar year. Lewandowski has scored 64 goals for Bayern Munich and the Polish national team so far in 2021.

He made history earlier this year when he scored 41 goals in a single Bundesliga campaign, surpassing the seemingly unbeatable tally of the late Gerd Müller on the final day of the season.

This time around, Lewandowski leads the Bundesliga with 14 goals and is the joint top scorer in the Champions League with nine goals — tied with Ajax striker Sebastien Haller.

Lewandowski missed a chance to win the Ballon d'Or last year as France Football decided not to hand out the award due to the coronavirus pandemic.

The Barcelona captain lead her team to a treble of the Women's Champions League, the Spanish Primera Division Femenina and the Copa de la Reina. 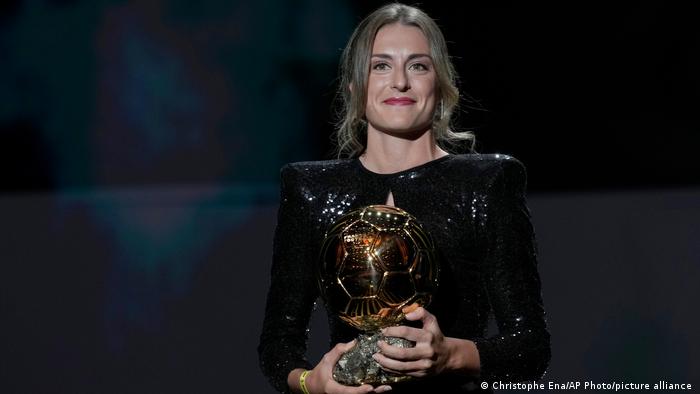 "I'm very emotional, it's a very special moment," she said through a translator. "I would like to start by thanking all my teammates, especially my current (Barcelona) teammates. For me it's a collective success."

Putellas, 27, saw off Chelsea's Sam Kerr and Barcelona teammate Jennifer Hermoso to win the award. She is the third female footballer be awarded the Ballon d'Or Feminin after Ada Hegeberg in 2018 and Megan Rapinoe in 2019 — like the men's award, the women's wasn't awarded in 2020 due to the coronavirus pandemic.

Putellas rejoined Barcelona in 2012 after briefly playing in the club's academy system. After first wearing the armband in 2017, she was permanently made the club's fourth captain in 2018.

The 2020-21 season was by far her best, scoring 27 goals and recording 19 assists in 48 games in all competitions. Putellas has continued that success into this season — she's the top scorer in the Spanish top flight with nine goals and 10 assists in 10 games.

Another Barcelona player, Pedri, who took home the Kopa Trophy as the best male under-21 player. Gianluigi Donnarumma took home the best goalkeeper prize, the Yashin Trophy, and Chelsea was named the best club, a new award given to the club who received the most award nominations.