At an EU-China summit on Wednesday, the bloc said now was not the time to lift its arms embargo on China, but that Europe was considering end the ban next year. DW-WORLD readers voiced their opinions on the issue. 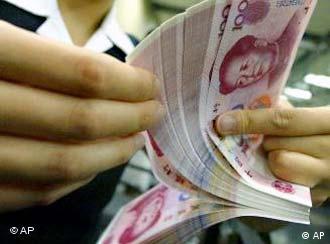 Should China be able to buy European weapons?

The following comments reflect the views of our readers as received so far. If you would like to have your say on this our another issue, please click on our feedback button below. Not all reader comments will be automatically published. DW-WORLD reserves the right to edit for length and appropriateness of content.

I am strongly against the lifting of this arms embargo. It was put in place partially as a response to the Tiananmen Square Massacre, and since that time China has not made any concrete steps in advancing human rights. In fact, repression has only increased in China. Despite claims to the contrary, China would only use these arms in its drive for hegemony over the rest of Asia, including bullying democratic Taiwan. Here in Canada, many of us tend to see Europe as progressive and humanist in its policies. However, if the EU sees itself as a leader in democracy and human rights, and has suitable requirements for member countries, then why does it show no interest in these subjects when it comes to China and the international community? This type of hypocrisy is truly shameful and must be stopped. -- Eric Wu, Canada

I believe the EU's consideration of lifting the ban is associated with a change in attitude towards the United States as a result of their 'gunboat' diplomacy on the world stage. Although the US strives to achieve greater relevance in the shaping of world affairs, their use of military might to achieve that goal is having the opposite effect. By unilaterally thrusting their ideals onto the world stage, they are alienating traditional allies. The end result of which is the increasing political influence of non-traditional powers on the world stage (China, and India being prime examples). Should the arms ban be lifted to China? Once China can demonstrate their commitment to the protection of human rights the ban should be lifted. Until then, they should continue to be 'politically discriminated against' on this issue as a result of the massacre at Tiananmen Square. -- Scott, Canada

The EU arms embargo is outdated. In the current situation, it merely helps to maintain the US military world dominance and support its imperialism. It is the US and not China which poses the main military threat in the world today. -- Jorg Rupf

I find it more than amusing that the EU leading personalities have been clamoring for the US to be more sensitive to EU concerns while the EU is inching towards selling a whole host of weapons to China. What happened to the EU being sensitive to USA concerns? The US will surely ask itself, why help defend EU member countries when the EU is selling equipment that China will want for any confrontation over Taiwan? The US is treaty bound to defend Taiwan so those EU weapons sales will have the potential to be used for killing Americans. Where in the world is the US arming potential military enemies to the EU? The US will do these actions once the embargo is lifted: Sanction any EU member that permits weapons to China and this means zero business in the US. Stop any useful flow of US technology into NATO arms programs. Refuse to allow EADS to have even a foothold in the US arms industry. Downgrade NATO to an even lower level than today. Permanently oppose adding Germany to the UN Security Council. In case you haven't figured this out, all of these actions together mean there is no Western Alliance. So whatever the benefits the EU sees in selling to China, the ramifications to US-EU relations will be profound. -- R Barry

This is a decision where (the) EU has to make on its own without outside interference particularly from the US. Linking human rights to arms sales is obviously not progressive. It is perceived to be very discriminatory against a country, which has a strong cultural tradition and one which is now the fastest growing economy of the world. Business money, tainted with democracy activists blood, obtained from a totalitarian government is also not a principled (stance). If China wants to murder or "repress" its own people, it does not need to use "advanced" weapons secured from the West. The very fact that the Sino-EU summit is held every year indicates that communication and engagement with China are the best ways to advance the cause of more openness and human rights development in China. Political reforms and freedoms will ultimately sweep China as she becomes more open and transparent to the world. Higher global trade, greater human interactions, higher level of human development, both socially and economically, will act as catalysts towards a more liberal society. Judicial reforms, the gradual adoption of international auditing standards covering government enterprises as well, a structured feedback system from the people and the leadership care towards its people are signs that the country is evolving positively.
China may not develop along the democratic lines espoused by the West but it will adopt a more liberal-minded society suited to its own growth philosophy in the years to come. And only the Chinese people themselves will decide the course of political development at its own pace and not by any Western democracy standards. Whether China will adopt a multi-party democracy giving each citizen one vote in the future is anybody's guess.
If the EU cannot make a proper and wise decision just ask the Nordic countries (small but equally adamant in opposing) or even the German parliament for suggestions. (Spain, Italy and the UK may vote for the EU embargo to go). Maybe the Scandinavian connections will take EU's trade interests completely out of East Asia because of human rights violations. -- Long See Hooi, Malaysia

China has been very aggressively expanding its territory in the past 40 years. It has annexed Tibet, Inner Mongolia, and parts of India. It is making claims on islands as far south as the Philippines. China continues to support the most repressive regimes in the world including North Korea, Myanmar and Sudan. The Chinese return North Korean refugees to certain torture. The Chinese are the most responsible for nuclear proliferation giving bomb plans, technical help etc to Pakistan, Iran, and Libya and design assistance for long range missiles to Pakistan and Iran.. Their markets are rigid, and they don't allow foreign competition to compete on a level playing field, favoring local people. Sending arms to China would be an irresponsible act, as this would give an undemocratic regime a dangerous amount of new firepower. -- Warren Jackson

China is today a responsible and internationalist country, and Beijing's strong commitment to multi-lateralism is one crucial indicator of its future direction. The second issue is that if the EU/German defense industry wants to compete with the US and Russian weapon makers, it is imperative to cater to large markets in Asia. Chancellor Schröder is correct to point out that the time has come to increase defense trading and improve EU-China relations. -- Atilla A. Iftikhar

Welcome the Chinese with open arms but with eyes wide. A mutually beneficial relationship can be developed to begin to offset the undue and hostile pressure from the USA. Sad to say, my country has become so controlled by economic powers and concerns that our constant push for "democracy around the world" is no more than what Karl Marx said would be "wars for no other reason than to expand or develop world wide markets." The US is not so much interested in everyone else's freedom as it is in its freedom to dominate world economic markets. Market dominated nations need ever growing markets elsewhere to continue to expand. The government's response to September 11 was only an excuse to attempt to secure future oil supplies. Join China with the express plan of providing a viable and effective counterweight to US domination. A secondary consequence of such a working relationship would be economic benefits for Germany, the EU and for China as well. -- Roger Wilcox, Ohio, USA

German Chancellor Gerhard Schröder came under criticism on Saturday for favoring the lifting of the European arms embargo on China against the wishes of the German and European parliaments. (Dec. 4, 2004)

Chancellor Gerhard Schröder found himself isolated in the desire to lift an arms embargo against China on Thursday. The coalition pointed to tensions with Taiwan and "massive deficits" in human rights. (Oct. 29, 2004)