Moammar Gadhafi's death has been confirmed by Libyan Prime Minister Mahmoud Jibril. Gadhafi was found by forces of the National Transitional Council in Sirte. 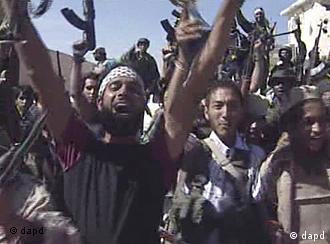 Libyans celebrate the official end of the Gadhafi regime

Former Libyan leader Moammar Gadhafi, who was driven from power in August by rebels seeking a more democratic Libya, has reportedly been killed by forces loyal to the National Transitional Council (NTC) on Thursday.

"We have been waiting for this moment for a long time. Moammar Gadhafi has been killed," he said.

Mahmud Nacua, Libya's ambassador in London, told journalists that Libya no longer had to worry about Gadhafi as they looked toward the future.

"The Libyan freedom fighters have finally succeeded in throwing the curtain on Gadhafi's crimes," he said in London. "Their brave actions have spared Libya and the world from any further suffering of his evil."

Fighters from the NTC have said Gadhafi was holed up in his hometown of Sirte, and images of a large drain pipe where he was reportedly found have circulated on television stations.

Grainy photos and videos of a man with a bloody face and torso have also appeared in several media outlets. The man bears some physical resemblance to Moammar Gadhafi, and media outlets showing the images claimed it was him. NTC fighters can be seen celebrating and crowding around the body, which appears to be dead in the images.

French Defense Minister Gerard Longuet said that a French warplane had halted the convoy in which Gadhafi was trying to escape from Sirte on Thursday. 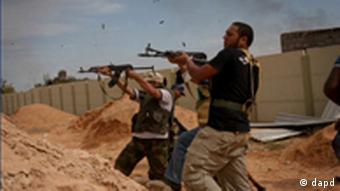 The fight for Sirte was long and fierce

He added, however, that the vehicles in the convoy had not been destroyed. They were subsequently intercepted by NTC fighters on the ground. The fighters detained Gadhafi, who had been shot in the right arm, and put him in a truck to be taken away, according to the Libyan government.

Libyan Prime Minister Jibril, citing a forensic report, said that Gadhafi died from a bullet wound to the head. The deposed dictator received the fatal wound when the NTC fighters transporting him got caught in crossfire between their own forces and Gadhafi loyalists, according to the report.

The exact circumstances surrounding Gadhafi's death remain unclear, however, with jerky amateur video footage suggesting that Gadhafi may have suffered violence at the hands of NTC fighters.

The NTC, Libya's interim rulers, has been battling to take Sirte for weeks now, announcing various ceasefires and deadlines for Gadhafi's forces to surrender.

Capturing the Mediterranean port city, located 250 miles (400 kilometers) southeast of the capital, Tripoli, has been seen as key to establishing the physical unity of a post-Gadhafi Libya.

NATO, which has enforced an UN-sanctioned no-fly zone over Libya since March, plans to end its air campaign now that Gadhafi's reign has come to end.

"We will terminate our mission in coordination with the United Nations and the National Transitional Council," NATO Secretary-General Anders Fogh Rasmussen said. "With the reported fall of Bani Walid and Sirte, that moment has now moved much closer."

NATO ambassadors are set to hold a meeting on Friday to discuss ending military operations in Libya. Britain's Foreign Secretary William Hague, however, said that the alliance should not rush its withdrawal.

"We want to be sure there are no other pockets of pro-Gadhafi supporters," Hague said. "We will only go when we are sure there is no further threat to the civilian population or when the National Transitional Council asks us to go."

As the news of Gadhafi's death became more and more concrete, European leaders began weighing in on his death and the future of Libya.

German Chancellor Angela Merkel said in Berlin that it was an important day for Libyans.

"This brings to an end a bloody war that Gaddafi waged against his own people," she said. "The path is now finally clear for a fresh political start, in peace. Germany is relieved and very happy about this."

Merkel encouraged swift steps toward democracy in Libya to "ensure the achievements of the Arab Spring cannot be undone."

"Today is a day to remember all of Colonel Gadhafi's victims," he said, mentioning, among others, those who died in the Lockerbie bombing in 1988, and Libyans who died "at the hands of this brutal dictator."

"The reported death of Moammar Gadhafi marks the end of an era of despotism and repression from which the Libyan people have suffered for too long," the statement said.

"We call on the National Transitional Council to pursue a broad based reconciliation process which reaches out to all Libyans and enables a democratic, peaceful and transparent transition in the country," the European leaders wrote.

The United States has praised the demise of Moammar Gadhafi's regime and called on the Libyan people to build a pluralistic democracy that would serve as a rebuke to the country's decades of dictatorship. (20.10.2011)

NATO and the European Union react to Gadhafi's apparent death