A second fuel depot has caught fire amid militia battles near Tripoli. Libyan officials say the blaze is nearing a natural gas reservoir. Germany, Austria and the Philippines are the latest to evacuate their nationals. 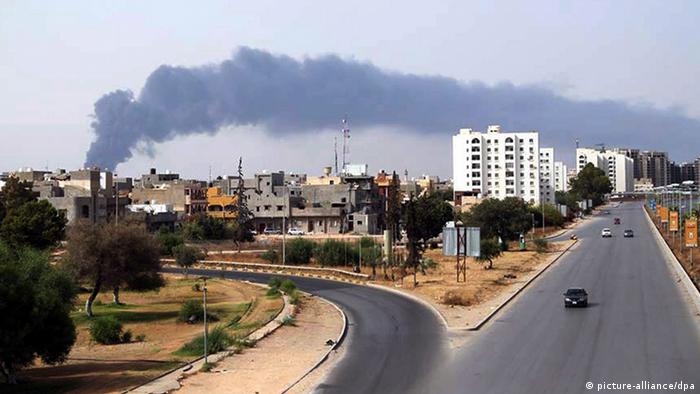 Libya's National Oil Company said the tank fire was "out of control" on Monday and firefighters lacking water had withdrawn. Libya's interim government appealed for "international help" to extinguish the inferno.

Libyan television stations urged residents to vacate homes within a 5-kilometer (3-mile) radius of the airport, which was shut down recently by fighting.

"The situation is very dangerous after a second fire broke out at another petroleum depot," the government said, warning of a "disaster with unforeseeable consequences."

Black smoke billowed over the Tripoli skyline on Monday as more foreigners and diplomats departed, some via the city's Mitiga air base.

The Philippines said its evacuees included several thousand Filipino doctors and health workers, adding that its nationals should evacuate "before all routes and options become extremely difficult."

A spokesman for the German Foreign Office told the news agency DPA that German staff had been evacuated but its embassy remained open thanks to local employees.

Calls to depart Tripoli immediately were also issued by Thailand, France, Spain, Britain, Poland and the Netherlands. Austria said its embassy was operating only on basic staffing.

Italy said it had helped more than 100 of its citizens to leave by road bound for Tunisia or by military aircraft. Relatives of US embassy staff were evacuated on Friday night, also to Tunisia.

Two weeks of battle for airport

The petroleum depot blazes are the culmination of two weeks' of battle between two rival brigades of former rebels that has claimed 97 lives.

One faction includes former troops of the late dictator Moammar Gadhafi and the western town of Zintan, who had controlled the airport since 2011.

Arrayed against them are various Islamist-leaning militias allied to the Mediterranean port city of Misrata, who have dug in near the airport.

A spokesman for the National Oil Company (NOC), Mohammad al-Hariri, said if the blaze was not brought under control if could ignite the adjacent gas reservoir.

He said firefighters "had to leave" when water reserves ran out.

Motorists in Tripoli face a severe petrol shortage because of service station closures over fears for the safety of staff amid the fighting.

The Tripoli clashes are the most severe since the 2011 armed revolt in which Gadhafi was killed by rebels.

They continue to refuse to hand over weapons to Libya's fragile interim government and fledgling army.

Also in turmoil is Libya's eastern city of Benghazi, birthplace of the 2011 revolution, where weekend fighting between army special forces and Islamists killed 28 people, mostly soldiers, according to officials.

In neighboring Egypt, President Abdel Fattah al-Sissi has warned about militants capitalizing on Libya's chaos to set up frontier bases.