Libya's national oil company has warned of a possible environmental disaster after a fire broke out at an oil depot. This comes as foreign governments warned their citizens to leave the country amid fighting. 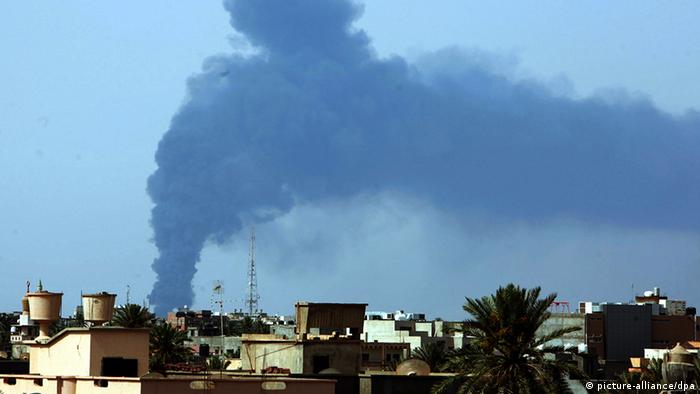 The state-owned National Oil Corporation said on Monday that firefighters battling the blaze at the fuel storage depot in southern Tripoli had been forced to abandon their efforts.

"Firefighters have been trying for hours to put out the blaze but to no avail. Their water reserves finally ran out and they've had to leave," NOC spokesman Mohamed al-Harari told the APF news agency.

He added that the only hope of containing the fire now was through "intervention by air," and that several countries had offered to send fire-fighting aircraft . He also warned of a potential environmental and humanitarian disaster if the fire could not be contained.

Harari had earlier told new agencies that the fire had started after the tank was hit by a rocket late on Sunday as rival militias clashed in the area. He said the tank, located on the road that leads from Tripoli to the airport, contained around six million liters of fuel. Other tanks at the facility contained more than 10 times as much, he said.

After the blaze broke out, the gas and oil ministry used social media to warn local residents living within five kilometers (three miles) of the facility to leave the area for their own safety.

This comes as foreign governments warned their citizens to leave Libya due to the worst fighting the country has seen since long-time strongman Moammar Gadhafi was toppled three years ago.

Germany, Britain, France and the Netherlands were among the European countries that issued such warnings on Sunday. This came a day after the US evacuated its embassy staff to neighboring Tunisia, due to security concerns as rival militia groups battle for control of Tripoli's airport.

More fighting was reported around the capital on Monday.

Dozens of people have been killed in heavy clashes between government forces and Islamist militants in the Libyan city of Benghazi. This comes a day after the US evacuated staff from its embassy in Tripoli. (27.07.2014)