Rival factions met with international diplomats in Tripoli amid a fragile ceasefire. Libyan leaders hope an undisputed election will bring an end to a decade of violence and instability. 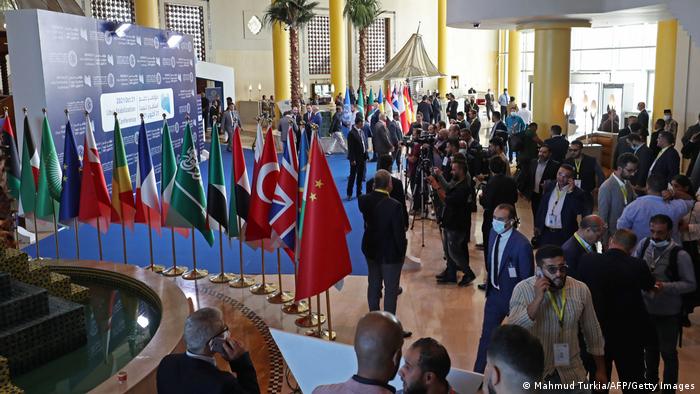 Rival factions in Libya launched a last-ditch attempt on Thursday to shore up support for their efforts to hold democratic elections in December.

At an international conference, representatives of the legislature based in the east of the country and the High State Council that sits in the capital Tripoli met with delegates from the the United Nations as well as regional and western powers.

"The conference underlines our continued support for implementing the elections, providing favourable circumstances for them and encouraging all Libyan sides to respect their results," he said.

Holding national elections on December 24 is a key provision of a UN-backed peace plan that has seen the warring factions cease hostilities for nearly a year after a decade of conflict brought on by the toppling of dictator Moammar Gadhafi in 2011.

The Libya Stabilization Conference ended with a communique from Libyan Foreign Minister Najla El-Mangoush stressing the need for confidence-building steps to enable fair, transparent and inclusive elections. Sitting next to her was her Kuwaiti counterpart Ahmed Al-Sabah, who said that the group rejected "all forms of foreign interference in Libya."

The election has been viewed as a key step in efforts to end the violence by creating a new political leadership whose legitimacy is widely accepted.

Joined by officials from the UN, Germany, France, Italy, Saudi Arabia, and Turkey, among others, Dbeibeh sought to end wrangling over the constitutional basis for the election, and calls from various factions to hold the vote on different dates.

Another sticking point in the peace deal was the complete withdrawal of foreign troops and mercenaries – warring groups are backed by different foreign governments, some of whome have sent soldiers to the country. Despite agreeing last October that these fighters had three months to leave Libya, thousands still remain.

Speaking during Thursday's summit, foreign ministers of Tunisia, Egypt and Saudi Arabia expressed support to holding the talks in Libya, rather than abroad, and said they rejected any foreign interference in the North African country.

Rosemary DiCarlo, the UN undersecretary-general for political affairs, called on international organizations to send "special envoys to observe this operation" as she insisted on the importance of the December election.

French Foreign Minister Jean-Yves le Drian said another summit on Libya due on November 12 in Paris aims to give a final international push to hold the election.

"It will provide the last international impetus needed in support of the elections at the end of the year... [and] endorse the Libyan plan for the departure of foreign forces and mercenaries and support its implementation, to put an end to foreign interference," le Drian said in a speech at Thursday's conference in Libya.