Leverkusen banished a recent poor run of form to mount a comeback 4-1 victory over Eintracht Frankfurt in the German Cup. Their quest to end a 28-year trophy drought remains on track. 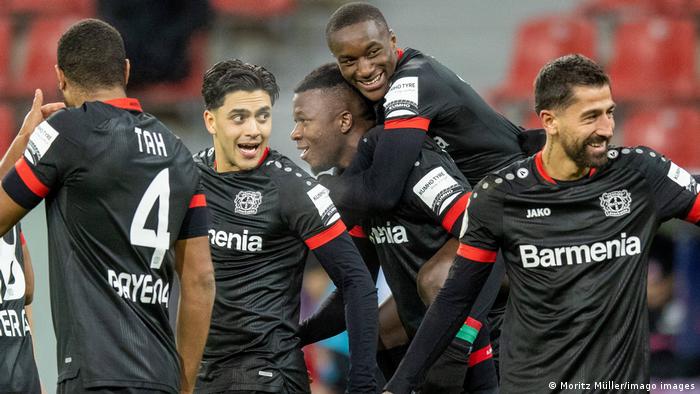 Just six minutes had passed in Leverkusen's German Cup clash against Eintracht Frankfurt and it looked as though their promising season would continue to unravel into traditional disappointment.

A goal down, looking disheveled and lacking ideas, it seemed like a third loss in four matches and an early exit from a competition they are desperate to win was on the cards.

But a character-building comeback saw them ride their luck before turning the game on its head with a dominant second-half display.

Four unanswered goals pegged their opponents back and the club's ambitions to end a painful 28-year wait for silverware is back on track.

"We didn't come into the match well. The 1-1 was like a can opener for us," playmaker Nadiem Amiri said.

"After that we found our way into the game a bit better and you could see the difference in the second half." 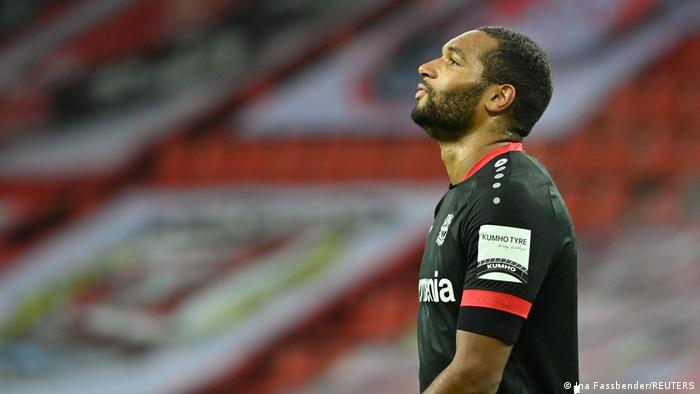 Jonathan Tah reacts to his red card against Eintracht Frankfurt.

When Amin Younes scored the opener after six minutes, however, Leverkusen hadn't even found the can let alone the opener. An early exit was calling.

The 27-year-old lost his markers all too easily as Frankfurt carved apart Leverkusen's defense. And in attack, the hosts weren't looking any sharper.

Three lucky breaks brought them back in the game though, Andre Silva missed a one-on-one, Younes went down injured, and Leverkusen won a penalty thanks to a fortunate handball decision.

Lucas Alario sent his effort straight and true to make it 1-1 on 27 minutes. The game had scuttled back and forth until then, but Younes' forced substitution hurt Frankfurt's flow.

Leverkusen came out in the second half a different beast, likely given a rousing kick up the backside from a frustrated Peter Bosz.

Nadiem Amiri and Kerem Demirbay dominated the midfield and instigated the next two goals. Edmond Tapsoba's header had a hint of offside about it in the 49th minute, but there was no doubting the quality of the goal to make it 3-1.

Amiri started his run from the left wing before streaming towards goal, before feigning to shoot and deftly feeding Diaby to slot home on 67 minutes.

Even a red card to Jonathan Tah on 73 minutes failed to spur Frankfurt into action, and a runaway Diaby effort with minutes remaining sealed a perhaps flattering but deserved 4-1 victory. 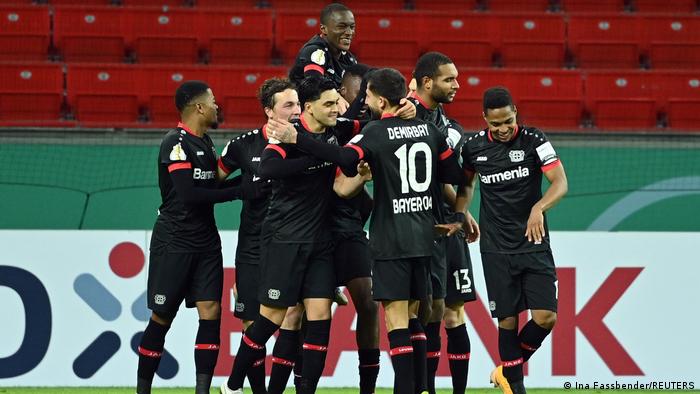 "You could see the confidence wasn't there in the early stages," Bosz admitted.

"But I must give the team a big compliment for turning the game around and showing that we wanted to win."

It was the 10th time this season Leverkusen have netted four or more goals. And the victory well and truly banished their blip in recent weeks, where they drew to Werder Bremen and lost to Bayern Munich and Eintracht in the league.

The Bundesliga title might still be some way off for this exciting, attacking outfit, but the German Cup is well within their reach. They last won the competition in 1993, their last piece of silverware.

After last year's loss in the final to Bayern, the opportunity is there for Leverkusen to go one better. And with a draw against fourth-tier Rot-Weiss Essen up next, they'll be confident of sliding in the quarterfinals.