Just over a week since the resignation of five PEGIDA leaders, yet another event linked to the anti-Islamization group has been canceled. Police have said LEGIDA's Monday rally has been called off for "security reasons." 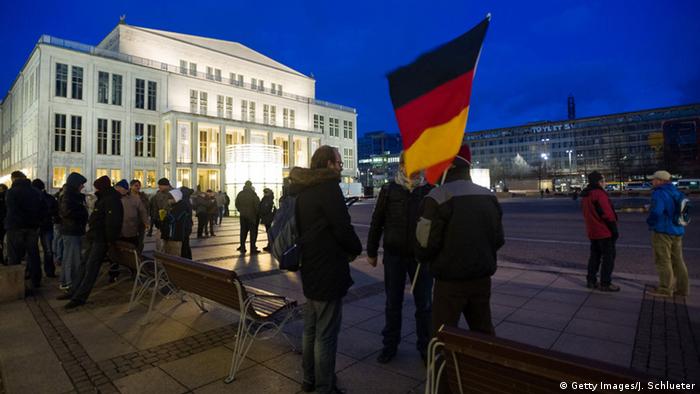 Leipzig Mayor Burkhard Jung said on Saturday that the necessary police forces could not be provided for the forthcoming LEGIDA march in the eastern German city, which was scheduled to take place on Monday.

The Interior Ministry of the state of Saxony rejected the figures, however, claiming that the general ban on the forthcoming demonstration was not justified.

"There are around 1,000 officers available to cover the march," said a spokesperson. "If the city considers this to be insufficient, they could enforce restrictions on the organizers and just allow rallies."

The LEGIDA movement, which loosely translates as "Leipzig against the Islamization of the West," has already demonstrated three times in the city. The group, a more radical offshoot of the original PEGIDA movement, announced on Thursday that it planned to demonstrate this coming Monday and every fortnight thereafter.#

At LEGIDA's third rally on January 31, however, the number of supporters dropped dramatically from previous weeks, with just 1,500 demonstrators in attendance.

Where does the future lie for PEGIDA?

Similar to marches in other cities across Germany, the Leipzig branch of PEGIDA has also been met with its fair share of counter demonstrators, with some 5,000 people gathering in previous weeks to promote open mindedness and to protest against xenophobic sentiments.

Mayor Jung failed to disclose on Saturday, however, whether a counter demonstration would be permitted on Monday.

Following the collapse of PEGIDA's leadership in neigboring Dresden last month, the future of the right-wing movement remains uncertain.

One of the reasons behind the collapse was due to some PEGIDA-co-organizers wanting to move away from the more radical LEGIDA movement. Former PEGIDA spokeswoman Kathrin Oertel has since called on followers of the new "Direct Democracy for Europe" initiative (DDFE) to gather in front of the Frauenkirche in Dresden on Sunday. Some 5,000 people are expected to attend.

A day later, PEGIDA will once again be taking to Dresden's streets for their usual Monday demonstration. At the height of the demonstrations in early January, PEGIDA saw a turnout of up to 25,000 people in Dresden. This week's figures, however, are expected to be just a fifth of that.