During his decadeslong career in writing, Wilbur Smith specialized in historical fiction, taking readers from tropical islands to the jungles of Africa. 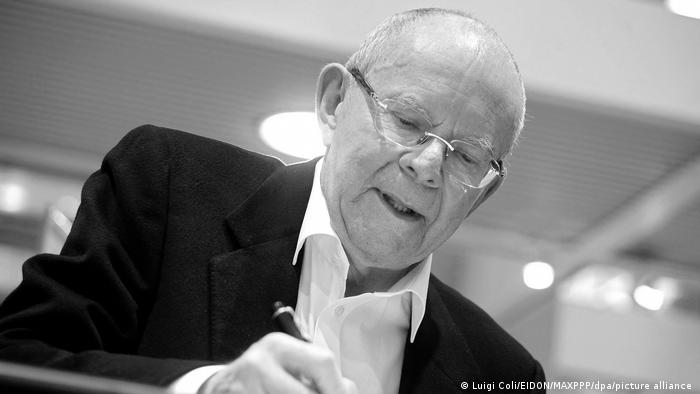 "We are sorry to announce that the beloved, global bestselling author Wilbur Smith passed away unexpectedly this afternoon at his Cape Town home, with his wife Niso by his side," said a message posted on the author's official Twitter account on Saturday night.

Similar statements were published on the Wilbur Smith Books website and social media pages as well as on the website of The Wilbur and Niso Smith Foundation.

The statements did not reveal the cause of death.

During his decadeslong career as a writer, Smith authored 49 novels and sold over 140 million copies worldwide in more than 30 languages.

"We are so grateful to his millions of fans across the world who cherished his incredible writing and joined us all on his amazing adventures," Wilbur Smith's office said in a tweet.

From accountant to bestselling author

Smith was born in today's Zambia in 1933 to a British family. He grew up experiencing the forest, hills and savannah of Africa on his parents' ranch. He credited his mother with teaching him to love nature and reading.

Smith wanted to become a journalist and write about social conditions in South Africa. But his father's advice to "get a real job" led him to become a tax accountant. Still, his love of writing didn't die.

Smith contracted cerebral malaria when he was just 18 months old and there were fears he would be brain damaged if he survived. "It probably helped me because I think you have to be slightly crazy to try to earn a living from writing," he later reflected.

In 1964, the author published his first novel, "When the Lion Feeds," which narrates the tale of a young man growing up on a South African cattle ranch. It turned out to be an instant bestseller and led to 15 sequels, tracing an ambitious family's fortunes for more than 200 years.

Smith said the novel remained his favorite because it was his first to be published.

His bestselling "Courtney Series" was the longest-running in publishing history, spanning generations and three centuries, "through critical periods from the dawn of colonial Africa to the American Civil War, and to the apartheid era in South Africa," said his publisher.

But it was with Taita, the hero of his "Egyptian Series," that Wilbur "most strongly identified, and River God remains one of his best-loved novels to this day," it added.

'An icon larger than life'

The author "leaves behind him a treasure-trove of novels," including unpublished co-authored books, according to Kate Parkin, a managing director at Bonnier Books.

Kevin Conroy Scott, his literary agent for the past decade, described him as "an icon, larger than life" and said his "knowledge of Africa, and his imagination knew no limitations."

Smith was married four times, with his last wife, Mokhiniso Rakhimova from Tajikistan, his junior by 39 years.