Lebanon’s outgoing Prime Minister Saad Hariri has held talks in Paris with French President Emmanuel Macron. After the meeting, he reiterated that he would return to Beirut next week. 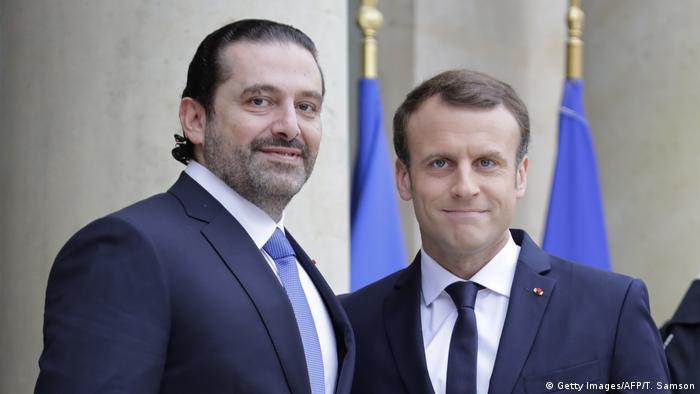 French President Emmanuel Macron welcomed the Lebanese premier, Saad Hariri, at the Elysee Palace on Saturday, as the French leader attempts to help broker a solution to the current political turmoil in Lebanon.

After the meeting, Hariri confirmed that he would travel to Beirut soon and clarify his position on the crisis that has followed his recent resignation.

"With regard to the political situation in Lebanon, I will go to Beirut in the coming days, I will participate in the independence celebrations, and it is there that I will make known my position on these subjects after meeting President (Michel) Aoun," Hariri said.

After his arrival, he is alleged to have called Aoun — who has refused to accept Hariri's resignation while he remains abroad — and announced that he will be returning to take part in Independence Day celebrations in Beirut on Wednesday, as reported in Lebanon's state-run National News Agency.

The ceremony is usually led by the president, prime minister and parliamentary speaker.

Macron had said Hariri would be welcomed with honors

Hariri's resignation and uncertainty about whether he would return to Lebanon prompted  Macron to make a surprise trip to Riyadh last week.

Macron urged calm and extended an invitation to Hariri to come to France, which the Lebanese politician accepted.

Early on Friday, Macron said he would welcome Hariri "with the honors due a prime minister" because the resignation has not yet been officially recognized.

Speaking at a EU summit in Sweden on Friday, Macron said that Hariri "has the intention, I believe, of going to his country in the days or weeks ahead."

Hariri announced he was quitting his post as prime minister in a video message on November 4, during a visit to Saudi Arabia. The 47-year-old politician accused Iran and its ally Hezbollah of sowing "fear and destruction" across the region and hinted at an alleged plot against his life. Hezbollah has a powerful militia, and its political wing is part of the ruling coalition.

Many in Lebanon and abroad, however, believe that Hariri was forced to resign by the Saudi authorities and was held in the kingdom against his will, as part of a major ploy against Iran's influence in the religiously divided Lebanon. Hariri belongs to the Sunni political faction which is backed by the Sunni-dominated Saudi Arabia, and also holds Saudi citizenship. He has consistently rejected reports of his detention.

President Aoun, a Marionite Christian close to Hezbollah, has refused to consider the resignation before the two meet in person.

In a rare English-language tweet, Saad Hariri responded to recent comments made by German Foreign Minister Sigmar Gabriel, saying it was a "lie" that he was held captive by the Saudi government.

On Thursday, Gabriel met with his Lebanese colleague, Gebran Bassil, in Berlin, where he warned against "adventurism" in the crisis prompted by Hariri's shock resignation two weeks ago.

Earlier in the week, the German official said that "Lebanon has earned the right to decide on its fate by itself and not become a pinball of Syria or Saudi Arabia or other national interests."

Saudi Arabia late on Friday announced it was recalling its ambassador to Germany for consultation in response to Gabriel's remarks. Saudi state news agency SPA accused Germany's top diplomat of suggesting that Hariri had been held in Riyadh against his will.

"Saudi Arabia has decided to recall its ambassador to Germany for consultations and will give the German ambassador in the kingdom a letter protesting these unfortunate and unjustified statements," SPA quoted the Saudi foreign ministry as saying.

Lebanese officials have demanded the return of Prime Minister Saad Hariri from Saudi Arabia. The head of the militant group Hezbollah said the Saudis had "declared war" on Lebanon by holding Hariri against his will. (11.11.2017)