Lebanese expats in Germany want justice after Beirut deadly blast | Germany| News and in-depth reporting from Berlin and beyond | DW | 12.08.2020

Lebanese people in Germany have spent the past week mourning the people killed and injured in the explosion in Beirut on August 4. They do not want to see international aid go to Lebanon's corrupt political class. Ramzi Merhej had just finished working from home in Berlin on August 4 and was about to go out to play basketball when he checked his Facebook page and saw that a friend was live-streaming from Beirut. "This friend lives in Mar Mikhael, right next to the port," he said. "She was live on her phone. I saw that her hands were full of blood. I saw her destroyed building. She screamed and then the connection went dead."

Merhej has lived in Germany since 2015, but all of is family is in Lebanon. Some of his relatives are in the Chouf Mountains, but most live in the center of Beirut. As social media filled with pictures and videos of the explosion and the mushroom cloud that it caused, he made frantic calls to find out if his family was OK. After 30 minutes of panic, he found out that his parents and sister were safe.

Later, he learned that a friend of his who worked near the port had died. The death toll is now more than 200 people. A friend's father is still missing. 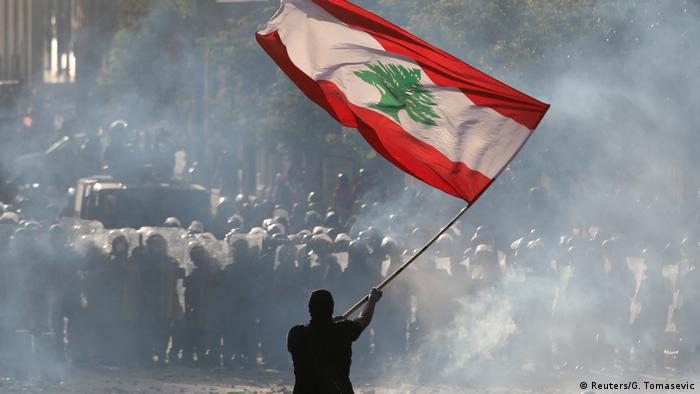 Merhej said he hadn't been able to sleep since the explosion. "I'm used to explosions and attacks in Beirut, but usually they affect one neighborhood or street," he said. "You find out quickly who was hit. This time, it's different. I still haven't really understood what happened this time."

While his sister and friends went out onto the streets of Beirut to help clear the rubble and join protests against the government, Merhej and his friends went to the Lebanese Embassy in Berlin to demonstrate on Monday.

Waving flags bearing the national symbol, the green cedar, and listening to music by the Lebanese singer Fairuz, they chanted "Kilon yani kilon" ("Everyone means everyone") and called for the entire political class to resign. Protesters began chanting these now-famous words in October.

Merhej regrets not being back in Lebanon. "I wish I could help people on the street, those who are being hit, shot and attacked by the police and the army," he said. But he added that he could also help from Berlin: "That's why I wanted to organize this protest in front of the Lebanese Embassy. It's the least I can do to try to exert pressure on the system and its representatives."

Grief and rage in Beirut

On Monday, after several Cabinet ministers had resigned over the weekend, Lebanese Prime Minister Hassan Diab announced that the entire government would step down. For now, however, the administration remains in office in a caretaker capacity until a new cabinet is formed.

Protesters were not appeased by Diab's announcement and said they would not rest until President Michel Aoun had stepped down and Parliament had been dissolved. "The government's resignation doesn't mean a thing," Merhej said. "Unless the president of the republic and the president of the Parliament step down, there will be no hope for Lebanon.

"Governments will come and go, but the system will not change," Merhej said. "We have to force people to take responsibility for what they have done." 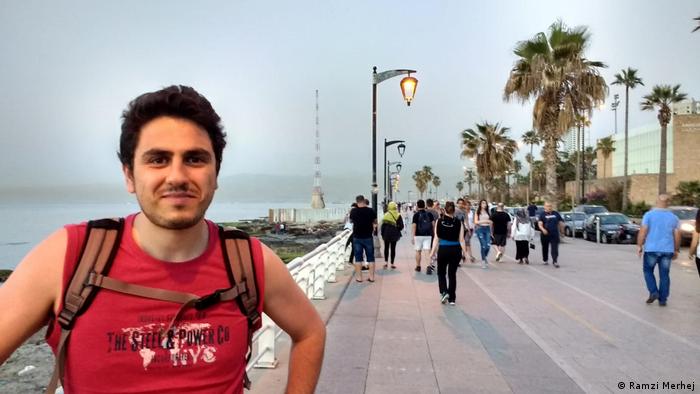 Merhej, pictured at Beirut's port in better times, said he wanted to protest in Lebanon

On Sunday, representatives at a conference of international donors pledged €200 million ($236 billion) in emergency aid to Lebanon. Twenty million euros will come from Germany, which had already pledged €10 million via the German Red Cross soon after the blast.

But many protesters in front of the Embassy on Monday said the aid should not go to the government.  "It is known that corruption has no limits," said Eddy Rizk, who has lived in Germany for over 20 years. "The money will vanish and only further enrich the already-wealthy elites."

International representatives at the conference said the aid would be tied to reforms and called for an independent investigation into the explosion. En route to Beirut Wednesday, German Foreign Minister Heiko Maas said Lebanon needed a "strong new start and radical economic reforms." He said this was the only way that the youth would develop trust in the country's political establishment.

"I really hope that Heiko Maas will go through with this and not give a cent to the Lebanese government before the protesters' demands are met," Merhej said. "These people have to be held accountable for the disaster," he added. "It's a crime against humanity."