Leak plugged at Fukushima, but radioactive water surplus remains | World | Breaking news and perspectives from around the globe | DW | 06.04.2011

A stream of radioactive water leaking into the Pacific Ocean from Japan's stricken Fukushima nuclear power plant has been repaired. But the danger is far from over, as several thousand tons of contaminated water remain. 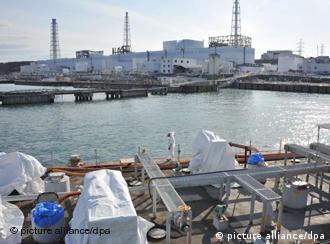 Radioactive water has reached the Pacific

Workers at the Fukushima nuclear power plant in Japan managed to stop a leak in a reactor that saw highly radioactive water streaming into the Pacific Ocean.

A compound known as liquid glass proved to be successful in stopping the leak, after several other methods - including pouring in concrete - failed.

Despite stopping the water from flowing unchecked into the ocean, an operation to deliberately release a separate store of low-level contaminated water into the ocean continued. This is to make room for water with higher contamination levels to be stored on site.

The flow of radioactive water into the Pacific prompted Japanese officials to enact the first-ever radiation limits on seafood. On Wednesday, Japan's Chief Cabinet Secretary Yukio Edano said fishermen whose catch had been affected by radiation should receive compensation. 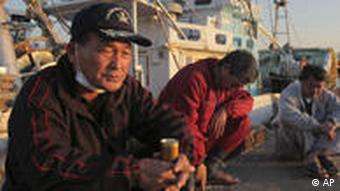 Fishermen are worried about contaminated seafood

Meanwhile concerns are growing that a build-up of hydrogen gas inside a containment vessel of one of the plant's reactors could trigger another explosion.

The plant's operator, Tokyo Electric Power Co (TEPCO), may start pumping nitrogen gas into the containment chamber to reduce the chance of an explosion.

A 20-kilometer (12-mile) evacuation zone on land has been extended to the sea, prohibiting fishing in the area.

The problems at Fukushima stem from a March 11 earthquake and tsunami off the Japanese coast that has so far claimed 11,000 lives and left 15,000 missing.

'Maybe the gods could also help in Fukushima'

A visit to the Meiji shrine in Tokyo reveals that while many Japanese pray for the victims of the March 11 disaster, the sense of an acute crisis has passed and given way to more personal matters. (04.04.2011)

Workers at Japan's devastated Fukushima nuclear power complex are struggling to stop radioactive water leaking into the Pacific Ocean, as the government warned that the facility may leach contamination for months. (03.04.2011)

As contaminated water leaks from the Fukushima nuclear plant into the Pacific Ocean, concerns rise over the effects of radiation exposure to marine life. (05.04.2011)

Japan says it is considering an offer from German Chancellor Angela Merkel to send remote-controlled robots to help clean up and repair earthquake and tsunami damage at the Fukushima nuclear plant. (31.03.2011)

Japan hopes the nuclear watchdog's visit will raise confidence for its plans to release more than 1 million tons of water from the Fukushima nuclear plant into the Pacific Ocean.

Although Japan did not hold an official national event to commemorate victims of the nuclear disaster this year, thousands of former residents of the towns around the nuclear facility gathered to offer their prayers.