The first female filmmaker to achieve international acclaim, Margarethe von Trotta is referred to as a "leading force" of the New German Cinema movement. As she turns 75, here are the highlights of her career.

In 2016, only 20 per cent of film directors were women - and that in spite of the fact that nearly half of all students at film academies are women. That's the result of a new study carried out by the Filmförderungsanstalt (FFA), Germany’s national film funding institution.

The study, however, could not explain why some female directors manage to be so successful. Among them: Margarethe von Trotta, who has been in the business for more than 40 years.

She began her career in 1975. Awarded a Golden Lion at the Venice Film Festival in 1981, she became the first female filmmaker to achieve international acclaim. Over the last 40 years, Margarethe von Trotta has received nearly 30 awards - proof of her endurance and dedication to her own will.

In 1960s Germany, the typical career trajectory of a woman looked clear: high school, office job, marriage, and housewife. And Margarethe von Trotta was no exception to this trajectory, initially.

Born on February 21, 1942 to an impoverished noblewoman and a painter, she grew up in the largely destroyed city of Berlin until the family later moved to Dusseldorf.

After finishing school, she visited Paris at the age of 18 - a trip that changed her life. She spent a lot of time watching movies together with her French friends: "These films opened my eyes to what a film could be like," she once said in an interview with the "Süddeutsche Zeitung."

"Of course, that made me keen on making films myself. But these were the early 1960s, and it was highly improbable that as a woman, I would be able to follow that path." With Rainer Werner Fassbinder in 'Baal'

Back in Dusseldorf, she studied art, and later on Romantic languages and German philology in Munich and Paris. She didn't finish her studies, switching instead to a drama school in Munich.

She met Jürgen Moeller, an editor in a publishing house; they married in 1964. In 1965, her only son Felix was born. At the same time, she worked at a theater and from 1967 onwards began working in film.

An important milestone in her career was her work with director Rainer Werner Fassbinder in his films "Gods of the Plague" and "Beware of a Holy Whore." Together with him, she stood in front of the camera in the film adaptation of Berthold Brecht's "Baal" directed by Volker Schlöndorff. The encounter with Schlöndorff had consequences. They fell in love and got married in 1971. Their marriage lasted for 20 years. Schlöndorff taught her the art of film directing.

Together with Volker Schlöndorff, Margarethe von Trotta co-directed her first film, "The Lost Honor of Katharina Blum," in 1975. From 1977 on, she did her own work: "Volker was a bit divided concerning my work. On one hand, he was proud of me, but on the other, he had a hard time coming to terms with it, especially when I started to receive awards for it," she recalled.

Those awards came in quickly. Her first solo work as a film director for "The Second Awakening of Christa Klages" was awarded the Filmband in Silber, a prestigious German film prize. A scene from 'Marianne and Juliane'

Magarethe von Trotta's third film, "Marianne and Juliane" (1981), which tells the story of the sisters Gudrun and Christiane Ensslin, won the Golden Lion in Venice. It marked the international breakthrough of 39-year old von Trotta - the first woman director in Germany after the war.

While the film was seen as a huge success in Germany, von Trotta's next film came under fire. "Sheer Madness" (1983) was about an intensive friendship between women which enabled the protagonist to protest against her unhappy marriage. "Some critics were obviously scared by this friendship between women," von Trotta said in an interview in 2012. "Some of the critiques were so harsh and sexist, that one would hardly believe it nowadays. This friendship was so strong that men reacted to it with a feeling of insecurity and anger." 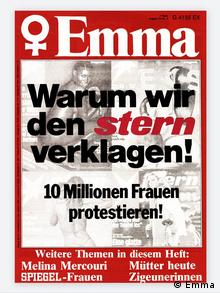 Cover of Emma: 'Why we are suing the Stern' magazine

Margarethe von Trotta makes her statements not only through her films. Together with the German feminist magazine "EMMA," she sued the weekly news magazine "Stern" in 1978 over sexist and pornographic pictures of women. Although the accusations were rejected, the campaign was nevertheless successful, as it raised public awareness of sexism.

Those hostile reactions to her film "Sheer Madness" also encouraged von Trotta to keep on telling stories of strong women. In 1986, she created a film adaptation of Rosa Luxemburg's life story: "This woman was permanently attacked too," she said to explain her choice. 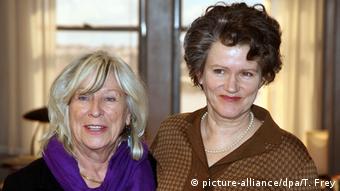 Von Trotta has her favorite actresses, such as Barbara Sukowa who starred in both "Marianne and Juliane" as well as in "Rosa Luxemburg." The two women also worked together in "Hannah Arendt" (2012) and "The Misplaced World" (2015.)

Although von Trotta's later films received rather mixed critiques, she remained successful in discovering and adapting strong stories. Her 2003 film "Rosenstrasse," for example, features mixed German-Jewish marriages and their struggle against the Nazis in 1943 in Berlin.

Her political attitudes and commitment can be traced in her films, even though Margarethe von Trotta's optimism doesn't seem as strong as in the 1970s: "I have tried to change the world so many times without success. That doesn't mean that I don't perceive things anymore; I still think that we should remain committed. It's just that we shouldn't assume that things become any better," she said in an interview with the "Berliner Zeitung" after the release of "Rosenstrasse." Still, she says, "Every morning when I wake up, I'm happy that I'm still alive. And I'm very happy about still being able to make films."

The Women's Marches show feminism is more relevant than ever. As Germany's influential feminist magazine turns 40, "Emma" and its founder Alice Schwarzer remain outspoken, even as they lose the support of younger women. (26.01.2017)

Director Volker Schlöndorff and playwright and novelist Max Frisch were friends. Schlöndorrf has just made another cinematic adaptation of Max Frisch's novels - Return to Montauk - with a dose of personal love story. (19.02.2017)