The US and Russian foreign ministers have reportedly agreed to meet in Geneva to discuss an accord on fighting the "Islamic State" (IS). Rights monitors have said at least 24 people were killed in the latest airstrikes. 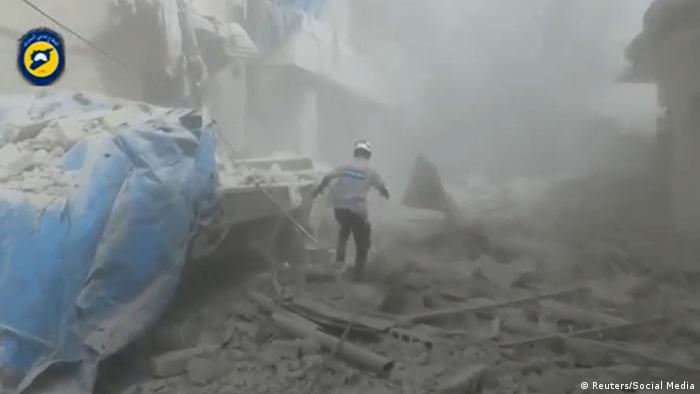 Russian Foreign Minister Sergei Lavrov and his US counterpart John Kerry, whose countries back opposing sides in the brutal civil war, were reportedly due to meet in Geneva on Thursday to try to reach a deal on cooperation in Syria.

According to the Russian foreign ministry, the pair agreed to a "personal meeting" to hammer out an agreement on fighting jihadists and pushing the peace process forward.

Kerry's spokesman would not confirm the meeting, however, suggesting that last-minute negotiations were still ongoing.

The talks come none too soon, as rights monitors condemned continuing attacks in Aleppo on Wednesday.

The Britain-based Syrian Observatory for Human Rights said at least 24 civilians were killed in the most recent air raids on a rebel-held area of Aleppo and a nearby village, held by IS.

Fourteen people were reportedly killed in the airstrikes on Tadef, near the town of al-Bab.

According to local opposition sources, the raids were carried out by Turkish forces. The information could not be in independently verified.

Al-Bab lies about 30 kilometers (18.6 miles) south of the border town of al-Rai, one of the centers of Turkey's recent ground intervention in support of Syrian rebels against IS and Kurdish-led forces. 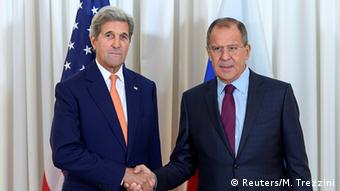 It also lies about 25 kilometers from positions held by the Kurdish-led forces who last month captured the city of Minbij from IS. Government forces are also positioned close to al-Bab.

Both rebels and the Kurdish-backed forces have said they intend to move on al-Bab. Capturing the town would allow the Kurds to link up their main territory in northeastern Syria with an enclave they control in the northwest.

Turkey and the rebels are adamantly opposed to the formation of a Kurdish entity spanning northern Syria.

The Observatory also reported separate airstrikes on Wednesday in Aleppo's eastern al-Sukari district. At least 10 people were killed in air raids, just a day after activists there reported a poisonous gas attack in which 22 people died and 40 others were wounded.

The international chemical weapons watchdog said it was "disturbed" by reports of chlorine gas use in an air raid.

Turkey says civilians are returning to areas in Syria once held by "Islamic State" militants. It comes amid quarrels between Ankara, Washington and Moscow over military tactics in the country. (07.09.2016)

British Foreign Secretary Boris Johnson has endorsed a plan put forward by Syrian opposition groups for a political transition to end the war. About 100,000 people have been displaced by fighting in recent days. (07.09.2016)

Three Turkish soldiers have been killed in a rocket attack by militants of the "Islamic State" (IS) group in northern Syria. They were the first deaths to be directly blamed on IS in the Turkish cross-border incursion. (06.09.2016)

Coronavirus digest: Protests in Italy as Europe locks down 2h ago