John Ausonius has received a second life sentence for the murder of a Jewish woman in Frankfurt. Ausonius' attacks on immigrants in the 90s are thought to have inspired other far-right "lone wolves," like Anders Breivik. 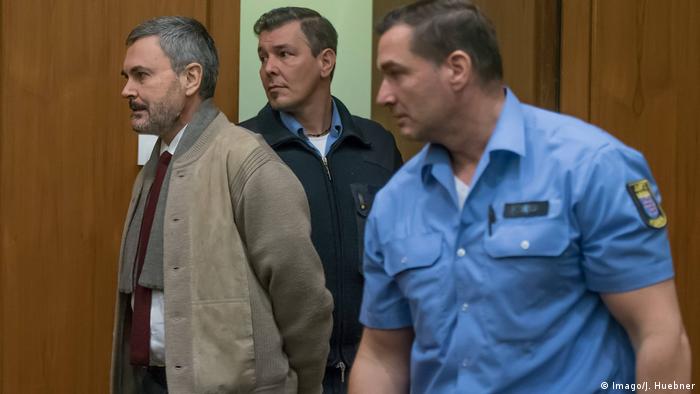 John Ausonius — the Swedish convicted killer dubbed "the laser man" and suspected white supremacist — has received another life sentence for the murder of a Jewish woman more than 25 years ago.

A Frankfurt court on Wednesday found Ausonius guilty of shooting dead Blanka Zmigrod, a 68-year-old Holocaust survivor, near her home in February 1992. The Swede, clad in a beige cardigan, showed little emotion during the hearing, as though he already knew what was coming.

Ausonius, born Wolfgang Alexander Zaugg, is already serving one life sentence in Sweden. In 1995 he was convicted for the murder of Jimmy Ranjbar, an Iranian national, and attempted murder of nine other immigrants in Stockholm and Uppsala. The shooting spree, coupled with a series of bank robberies spanning from August 1991 to February 1992, had gripped Sweden.

Ausonius was given the nickname "laser man" by the Swedish press because he used a rifle equipped with a laser sight to carry out the shootings.

'Not the slightest doubt' Ausonius is guilty

Although the prosecution was unable to provide tangible proof that Ausonius committed the murder, prosecutor Nadja Böttinger told the court during Tuesday's plea hearing that the evidence at hand was far too abundant to be considered mere coincidence. During Wednesday's sentencing, Judge Bärbel Stock agreed, saying the court did not have "the slightest doubt" that Ausonius had murdered Zmigrod.

Life sentences in Germany typically involve no more than 15 years of jail time and the court on Wednesday could not demonstrate the "particular severity of guilt" on behalf of the defendant required under German law to make a longer period of incarceration possible. However, the court also ordered that Ausonius be placed in preventative detention once his jail time was up.

Bärbel said Ausonius showed a "high tolerance for cold bloodedness" and that he committed the crimes "rationally and carefully."

The court also heard that Ausonius had repeatedly shown a propensity for violence during the first 10 years of his incarceration in Sweden. There would a "high risk of further delinquent acts" if he were released, the judge said, as she passed down the sentence.

Ausonius is slated to return to prison in Sweden, albeit only after the defense's appeal is considered. That is expected to take some eight to 10 weeks.

Ausonius will likely serve the sentence handed to him by the German court in parallel with his life sentence in Sweden.

Swedish authorities will then have to consider the German court's ruling the next time Ausonius makes a case for release.

While the defense recognized that this means Ausonius will likely stay in prison, the Frankfurt court's decision to place him in preventative detention following his prison sentence suggests there is a slight chance 64-year-old will at some point be allowed to leave prison.

Böttinger admitted she was left wanting by the court's final decision. "(Ausonius) is a killer who deserves to spend the rest of his life in prison," she said.

Defense attorney Joachim Bremer expressed his displeasure at the court's decision to tie Ausonius to Zmigrod's murder simply because he was in Frankfurt the day before and Zmigrod was killed in much the same manner as Ausonius' victims in Sweden.

Ausonius and his defense team had pleaded his innocence until the very last.

It was during his time on the run from Swedish authorities in 1992 that Ausonius fled to Germany, holing himself up in Dresden and then Frankfurt. It was in Germany where he acquired a fake passport, which he later used to travel out to Johannesburg, South Africa.

The prosecution accused Ausonius of killing Zmigrod in February 1992 following an argument the pair had the day before the incident at a "Mövenpick" restaurant in central Frankfurt, where Zmigrod worked as a cloakroom attendant.

Ausonius reportedly accused Zmigrod of stealing an electronic notebook on which, the prosecution alleged, he had stored important contacts and necessary information needed to pull off his escape to South Africa.

According to witness statements, the two got into a heated argument. When Ausonius was told to leave the restaurant, he reportedly told Zmigrod they'd be "seeing each other again." Thirty-six hours later she was dead.

Years later, when Ausonius was ordered to stand trial in Germany, an investigation by a Swedish newspaper found that Zmigrod had survived several Nazi death camps during World War II. In her ruling, the judge said that Zmigrod had "survived multiple concentration camps, but not the meeting with the defendant."

German authorities knew that Ausonius was in Frankfurt at the time of Zmigrod's death, and even began investigating him in connection with the murder back in 1993, before eventually closing the case in 1996.

However, in 2014, federal authorities began looking into old cases that could be connected to the murders committed by the National Socialist Underground (NSU), a German neo-Nazi group, between 2000 and 2007.

Frankfurt prosecutor Nadja Böttinger told German weekly Stern that when Zmigrod's file landed on her desk and she began looking into the evidence against Ausonius. "I simply couldn't live with the fact that the investigation had been closed," she said.

She then traveled to Sweden to question Ausonius about Zmigrod, where, she said, he behaved very strangely. "He was able to remember many details, but as soon as it concerned something relevant to the case, he suddenly didn't know anything."

However, since the trial started in December last year, the court struggled with weighing up whatever little evidence there was that pointed to Ausonius.

The most important piece of evidence, however, proved to be Ausonius' encounter with Zmigrod the day before, as well as the ammunition that was used her killing, which matched the type "the laser man" used for the shootings in Sweden.

While Ausonius admitted to having previously owned such a gun, he maintains that he sold the weapon shortly before the day Zmigrod was murdered.

While the ideological motive behind Ausonius crimes remains unproven, the similarities between Ausinius and other racially motivated killers, such as the NSU and Anders Breivik in Norway, are evident.

Ausonius maintained during his trial in Sweden that he only shot at the first people who came within his range in order to create a diversion for his bank robberies. The fact that they were all immigrants was simply a coincidense, he said.

During the Frankfurt trial, the Swede accused the prosecution of making him a "scapegoat" for the NSU murders. The court refused to pass any judgement, saying he was "not neccessarily an ideological killer, but one who displayed the behavior of a psychopath.

Ausonius’ shooting spree in Sweden has been described as the first racially motivated “lone wolf” attack. Breivik, who murdered 77 people in Oslo and the Norwegian island of Utoya 2011, directly cited the "laser man" as an inspiration during his trial.