Barack Obama is the first US president to visit Laos. Yet Laos has a long and painful history with the US, stretching back over 50 years. And this history is made up of a secret war, a secret army and a secret city. 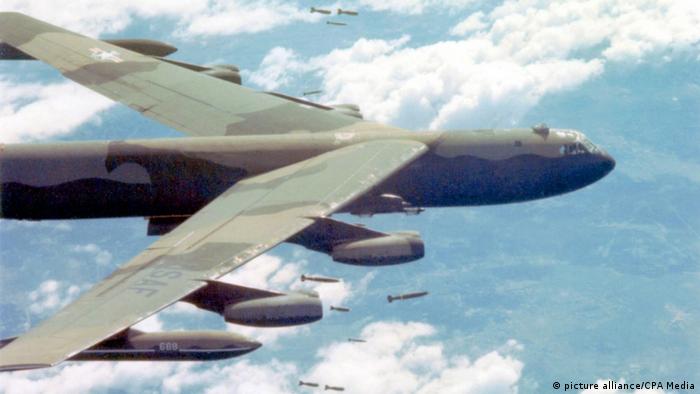 The history of the US intervention in Laos has all the ingredients of a thriller. It's a dark thriller, set in the period of the Vietnam War about 50 years ago. Its a story above all in which there are only losers. And the greatest loss of all has been suffered by the Laotian people. From 1964 to 1973 the US undertook the heaviest aerial bombing attacks on Laos. For the first five years this was a "secret war" that not even the US Congress knew about – let alone approved.

The US dropped 2 million tons of bombs on Laos, including 270 million cluster bombs. This was more than on any other country. Since about 80 million cluster bombs didn't explode, around a third of the country is littered with these bombs. And there are still victims - even today. Most recently, a tennis-ball-sized cluster bomb exploded injuring five children.

Although for the last 20 years there have been measures in place for the clearing unexploded bombs, the founder and executive director of the Washington-based NGO "Legacies of War," Channapha Khamvongsa, explains: "Some regions will probably never be able to be cleared." The area already cleared is about 1 percent, she told DW. During his time in office, Barack Obama, the first US president to visit the small East Asian country, has significantly increased US funding to clear unexploded bombs. 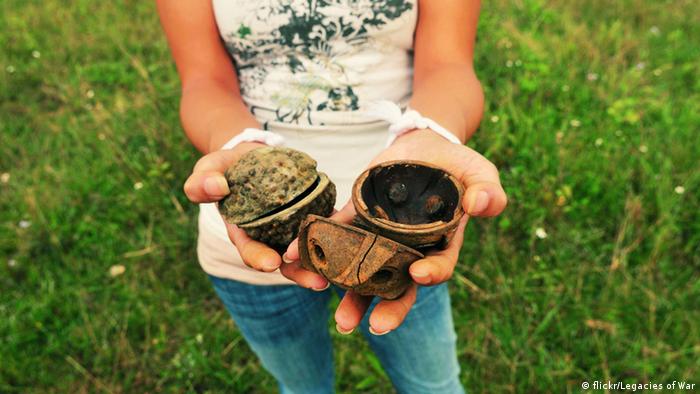 Roughly one-third of Laos is contiminated with the undetonated bombs

The less important neighbor of the Vietnam War

During the Vietnam war, Laos was actually only of importance as a neighbor to Vietnam. The country was officially neutral. This neutrality was guaranteed in 1962 in Geneva by a binding agreement that was ratified by 14 countries. It was to be monitored by the United Nations. But Laos quickly became a mere pawn at the mercy of more powerful interests. Two things in particular led to Laos' downfall: it's proximity as a neighboring country to Vietnam and Washington's popular "Domino Theory." According to this - in simple terms - if Laos became communist then the whole of southeast Asia would follow. In fact, Laos did have an armed communist movement called Pathet Lao. Plus, communist North Vietnam was organizing supplies for the Vietcong in the south partly across Laotian territory, on the famous Ho-Chi-Minh trail.

That's why Laos became the base for one of the largest secret intelligence operation in the history of the CIA. As a result, members of different hill tribes were recruited for a secret army. They were trained, armed and sent out to fight in a guerrilla war against the Pathet Lao and Vietcong. Central to this whole operation was a city that did not appear on any maps: Long Cheng (or Long Tieng).

In the tropical hill country, around 130 kilometers (80 miles) north of the capital Vientiane, a secret settlement of about 40,000 people emerged on either side of a 1.3km long airstrip. At the time it was the second largest city in Laos. The American journalist, Roger Warner, has heavily investigated the secret war in Laos. He conducted more than 150 interviews, examined documents and witness reports and brought out a book in 1995. Warner described to DW that Long Cheng was an extremely busy airport. From dawn to dusk, almost without a break, propeller-driven aircraft and airplanes took off and landed.

Most of the approximately 400 take-offs and landings were by Air America aircraft, a CIA-run company. These flights brought supplies, weapons and instructors to the hill tribes. They also spied on the activities of the Pathet Lao and Vietcong and marked out targets for bombing missions. According to Warner, the chief architect of the operation was a CIA agent called James William Lair. "Lair had already created a special forces troop in Thailand. He brought them to Laos in the early 1960s. They then worked as trainers, advisors and agents, as well as operating the radio equipment." 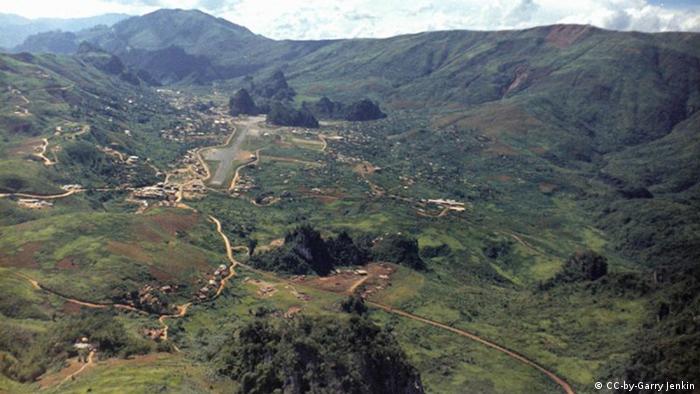 This now sleepy area of Laos was the country's second largest city 50 years ago. But it wasn't marked on any map

Most importantly, Lair built up contact to Vang Pao. As a captain in the Laotian army, he was the highest ranking officer amongst the Hmong community and was talked in to the idea of creating a guerrilla force. As general, Vang Pao commanded this almost 40,000 strong, mostly Hmong force.

High casualties amongst the hill tribes

Despite being well-equipped and having massive air support, Vang Pao's force was wiped out in the fierce conflict. The highest toll was amongst the Hmong people. The Hmong expert, Kou Yang, from California State University described the sad statistics of the war in an email to Deutsche Welle: "More than 10 percent of the Hmong community was killed during the fighting, with many others wounded and permanently disabled. Did they fight for the US? No! The conflict was brought to their villages and they were forced to choose a side and fight. Did they even know the difference between communism and capitalism? No!" stresses Yang, who was born in Laos.

Apart from the Hmong, other tribes were also mobilized in the conflict against the Pathet Lao and North Vietnamese. For this purpose, CIA agents were sent to remote mountainous regions – where they sometimes ended up having a strange life of their own. Thomas L. Ahern Jr, for example, worked for the CIA for over 30 years. In 2009 his previously internal-CIA historical study was published under the title of "Undercover Armies – CIA and Surrogate Warfare in Laos." 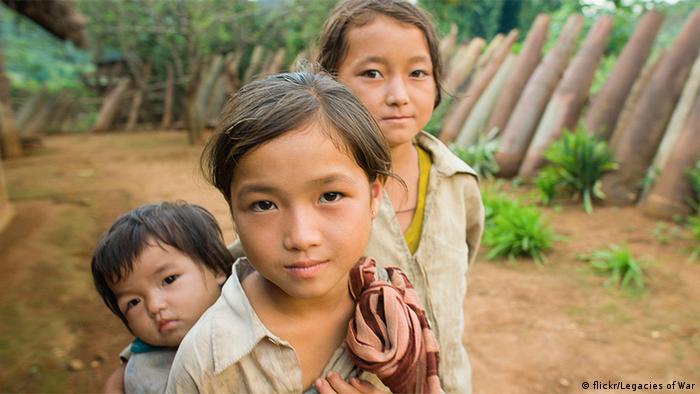 The fence pictured behind these children is made of shells from cluster bombs. This is just one example of how remnants of the war is still seen in Laos

In the official version, with heavily blanked-out sections, a young secret agent was quoted as saying: "It was pretty heavy-going, being out there alone in the mountainous regions of Laos. I was my own boss, with my own small plane. I had cargo planes and helicopters on call to support around a thousand guerrilla fighters who were completely dependant on me for food and stocks, for training, ammunition, communications and tactical guidance."

The model for 'Apocalypse Now'

In the end it meant that the secret agents could drop rice if they wanted to – or bombs. Given so much power, some of them went beserk. A famous example is Anthony Poshepny. The well-built war veteran was first stationed in Long Cheng. He was then transferred to tribes in northwest Laos. Upon his death in 2003 he was described in his obituary in the Wall Street Journal as a CIA agent who had left Western civilization, married a tribal princess and collected the ears and heads of his enemies.

Author Roger Warner who got to know Tony Poshepny confirmed, "Yes, he collected the ears of his enemies. He was a really aggressive guy. Tony Poe was a colorful character, a strong alcoholic who could tell amazing stories." By 1970 it was even too much for the CIA that this man had become a kind of warlord of the jungle. Poshepny was removed from Laos. In his obituary, the Wall Street Journal quoted the former CIA agent Jim Scofield, who described how Poshepny "came in stone-drunk to a meeting at the US embassy in Vientiane with a shotgun in one hand and a machete in the other." Many see Poshepny as a model for the character of Captain Kurtz in Francis Ford Coppola's drama on the Vitenam War, "Apocalypse Now."

In light of this, it isn't surprising that CIA historian Ahern wrote in the introduction to his history of the secret war in Laos: "This campaign was the biggest adventure of their professional lives for almost all CIA agents who were involved."

For many Laotian people this sentence must sound purely cynical.