Klaus Volkert was sentenced to 33 months in jail for his role in the massive corruption scandal that hit Europe's biggest carmaker VW in 2005. A second VW manager received a suspended sentence. 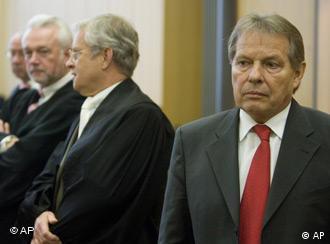 Two former VW executives were convicted Friday, Feb. 22, in a bribery scandal that began some three years ago.

Klaus Volkert, one-time leader of the Volkswagen works council, was convicted of incitement to breach of trust and aiding and abetting it, as well as breaches of German labor law such as accepting improper bonuses and benefits.

The trial was told that he sanctioned nearly 2 million euros ($3 million) in illegal payments to Volkert after his boss had told him to "be generous" to the powerful labor figure.

Both Volkert and Gebauer say they plan to appeal the verdicts. 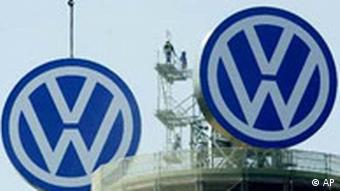 The company has been rocked by scandal

The trial was one part of a broader investigation into claims that VW managers bribed labor leaders in exchange for support on policy.

Volkswagen says it did not discover until June 2005 that its funds were being spent on prostitutes and bribes for the head of the council, which is a legally-mandated body representing workers and salaried staff.

Volkert was accused of setting up a dubious contract between Volkswagen and his Brazilian mistress Adriana Barros, under which she received 400,000 euros without providing anything to Volkswagen, Europe's largest carmaker, in return. 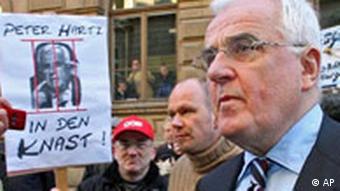 This was the third trial related to the scandal, but the first time a jail sentence has been handed down.

He had admitted being the initiator of the abuse that saw nearly 2 million euros paid to Volkert between 1995 and 2004 in an attempt to win union support for company decisions. Executives above Hartz deny they knew about the practices.

Hartz testified at a court hearing that his seniors had no knowledge of the payments.

The scandal originally centered on bribes from potential suppliers and the creation of dummy companies to secure lucrative contracts in India, Angola and other nations, but it widened to include claims of prostitution, sex parties and illegally financed perks.

The case has shone a revealing light on the cozy relationship between the company's management and labor representatives.

During a civil trial on Wednesday, Jan. 9, Volkswagen board chairman Friedrich Piech denied he knew about a corporate slush fund and corruption network while he was chief executive of Europe's biggest carmaker. (09.01.2008)

A Frankfurt prosecutor is investigating whether two Volkwagen employees and a former executive took kickbacks from a supplier. It is the second such corruption scandal to rock Europe's largest carmaker in the past year. (24.07.2006)

Volkswagen's supervisory board has given the go-ahead for a deep restructuring of the group's loss-making VW brand. However, the board put off discussing the renewal of CEO Bernd Pischetsrieder's contract. (21.04.2006)

Do you think these were fair sentences for Volkert and Gebauer? Send us an e-mail, including your name and country of residence.