Löw says Germany squad contains 'no losers' ahead of Confed final vs. Chile

Having met in the group stage, Germany and Chile will now battle it out for the right to be the 2017 Confederations Cup champion. Captain and coach both appear confident lessons have been learned ahead of the clash. 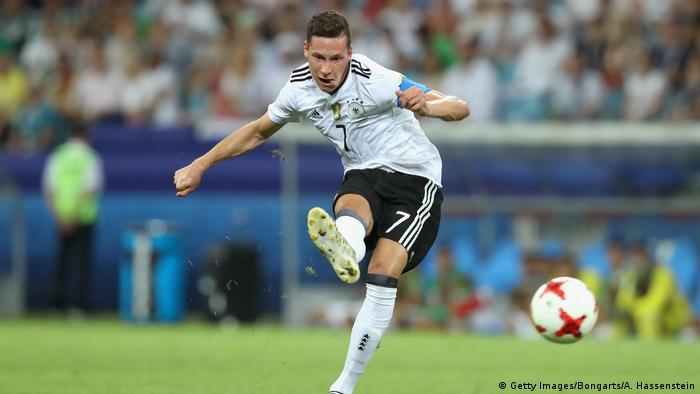 The microphone at Germany's press conference ahead of their Confederations Cup final with Chile on Sunday picked up Joachim Löw mentioning that the coffee was "too sweet" for his liking. For the most part, Löw's trip to Russia has been entirely to his taste and a win against Chile in the final would leave both Löw and Germany feeling just right.

With the likes of Mats Hummels, Manuel Neuer and Toni Kroos enjoying the summer off, Löw's so called "B team" has impressed in a tournament the Germany boss initially didn't have much time for. Schalke's Leon Goretzka has shown off his qualities in timely fashion, Timo Werner has shown what kind of striker he could be for Löw longer term, and Julian Draxler's performances have been enhanced not hampered by the armband.

Against Chile in the group stages though, Germany looked like the inexperiened and developing squad they largely are. In the 1-1 draw, Löw's back five failed to work as the scoreline flattered them, despite their second-half improvement. "In the first game, we were asleep for the first 15 minutes. We have to change that," Draxler (top) said on Saturday.

"Small corrections" is what Löw called for, compared to the first game. "We could have been 2-0 down," Löw said on Saturday. "Chile press really hard. I hope we can find a way out."

If Germany don't, Chile will be the conqueror of the champions - and, according to Arturo Vidal on Saturday, the South Americans will have proved themselves to be "the best side in the world."

As World Cup champions, Germany will feel they are the best until the real tournament in Russia comes around next year. Winning the Confederations Cup isn't a necessary step towards that title defense for the team with the youngest average age of all those at the tournament.

"There are absolutely no losers in this squad. The tournament has furthered us all. That's why I'm already happy today," Löw said on Saturday. Germany's talent pool already boasted more names than most, but after this tournament and the success of the U21s in Poland, that pool is overflowing. "The choice that the coach has right now speaks for German football," Draxler said.

What could speak for German football more than yet another trophy? Germany have never won the Confederations Cup, and while it isn't one of the most coveted football titles out there, victory would simply reiterate German football's sustained dominance.