Voters have turned out in large numbers for Kuwait's first election contested by the opposition in four years. Stakes are high, with dissatisfaction mounting as falling oil revenues force deep cuts in public spending. 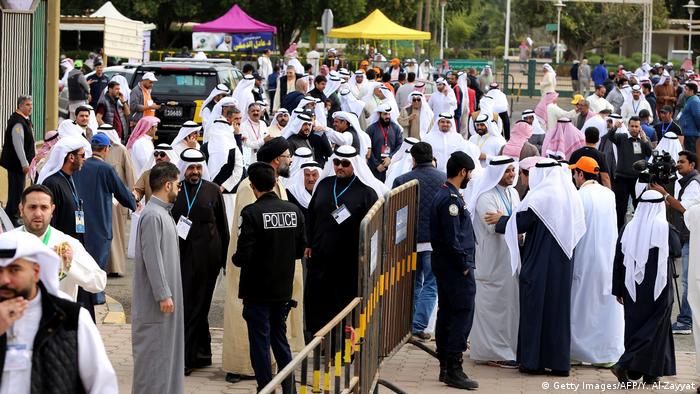 OPEC will cap production at 32.5 million barrels per day (bpd) in order to boost oil prices, which have slumped in recent years. The preliminary agreement is the first since the global financial crisis started in 2008. (29.09.2016)

Kuwaitis voted Saturday for representatives in the tiny, oil-rich country's parliament as the Gulf nation struggles to cope with spiraling oil prices that are straining public finances. Kuwait has an elected parliament with powers to hold ministers to account, even though senior members of the ruling Al-Sabah family occupy the top cabinet posts.

Turnout was high with some polling stations reporting that 80 percent of eligible voters had cast their ballots by the time polls closed at 8 p.m. (1700 UTC), state-run Kuwait Television reported. But as Kuwaiti citizens make up just 30 percent of the emirate's 4.4 million population, a mere 483,000 residents are eligible to vote.

Kuwait's two previous elections had poor turnouts due to opposition boycotts. This time, however, voters said they were encouraged by seeing their candidates running.

"Their return is needed to strike a political balance in the country. They are more capable of monitoring the government actions," voter Ibrahim Al-Tulaihi told AFP at a polling station south of Kuwait City.

A recent government crackdown on political dissent, including the shuttering of opposition media, the jailing of prominent opposition figures and changes to the electoral law have undermined many people's confidence that the election will matter. Yet the opposition is fielding 30 candidates among a total of 293 hopefuls, including 14 women.

Opposition candidates campaigned heavily for economic and social reform and an end to what they charge is rampant corruption. The ruling Sheikh Sabah Al Ahmad Al Sabah is 87 years old, and his advanced age has raised questions about Kuwait's future