Nearly 15,000 Kurds have marched on the streets of Dusseldorf to protest ongoing Turkish military operations and curfews in Kurdish towns. The Turkish government says they are rooting out Kurdish terrorists. 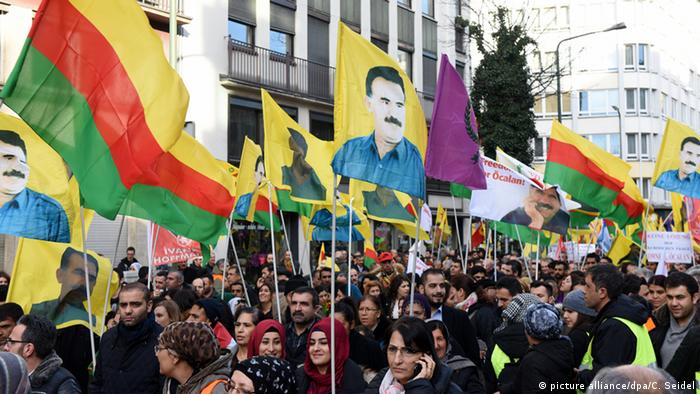 The number of demonstrators was more than double the 7,000 organizers had originally expected and some had come from neighboring countries to attend.

Organized by the German-Kurdish organization NAV-DEM to condemn what they called "Turkish state terror," the protest moved through the streets of Dusseldorf, which were quiet as shops were closed for the Christmas holiday. NAV-DEM also condemned an EU deal with Turkey to stem refugee flows.

Some local residents put up banners indicating their disapproval that the noisy protest was held on a holiday.

"Hello Kurds - you are welcome, but we find it rude and disrespectful that you demonstrated today," one sign read.

Several Kurdish towns and districts in southeastern Turkey - including Cizre, Silopi, Nusaybin, Dargecit and Diyarbakir's Sur district - have been under weeks of 24-hour, open-ended curfews as the military carries out operations against PKK-affiliated militants who have built barricades and trenches to keep security forces out.

The government has vowed to root out every last "terrorist" from Turkish soil and accused Kurdish politicians of provoking the violence.

The fighting has left civilians caught in between the warring sides, turning Kurdish towns into warzones with bullet and mortar shrapnel-riddled neighborhoods resembling scenes from neighboring Syria.

More than 1 million people have been impacted by the curfews and at least 100,000 people have fled as electricity and water has been cut. The curfews have prompted widespread protests against the government and security forces, which have fired water canon, tear gas and even live bullets at those violating the curfews.

According to the Human Rights Foundation of Turkey, since mid-August there have been 56 open-ended curfews and at least 124 civilians have been killed, including women and children.

On Friday, Kurdish social media was abuzz with anger after it emerged a three month old baby was killed by a stray bullet in Cizre.

The military operations picked up this week with full scale assaults as Turkish tanks fired into Cizre in what security forces said was an attempt clear explosives planted around barricades and trenches.

Human Rights Watch this week said the Turkish military operations were "disproportionate" and did not distinguish between those that are armed and those that are not, while also calling on PKK militants to stop setting up barricades. HRW warned the civilian death toll is likely to increase if operations continue.

The PKK has traditionally operated in rural areas and the mountains, but following the breakdown of a two-year ceasefire and peace talks in July the group's urban youth wing, the YDG-H, over which it has questionable control, declared "autonomous administration" in several towns.

In a worrying trend, the government has deployed masked special operations security forces dubbed "Allah's Lions" (Esedullah), who are accused by Kurds of carrying out grave human rights abuses and spray painting walls with intimidating religious and Turkish nationalistic messages.

Hundreds of security forces, PKK militants and civilians have been killed since July as the prospect for a political solution look increasingly grim.

The PKK is recognized as a terror organization by the European Union, the United States and Turkey. At least 40,000 people have been killed and hundreds of thousands displaced in nearly three decades of fighting.

The PKK originally set out in the 1980s to create an independent state but has changed its demands to more rights for Turkey's 15 million Kurds and greater autonomy.